As part of AMD's Financial Analysts Day 2022, AMD has provided updates to its Server CPU roadmap going into 2024. The biggest announcement is that AMD is already planning for the (next) next-gen core for its successful EPYC family, the 5th generation EPYC series, which has been assigned the codenamed Turin. Some key announcements include various segmentations of its expected EPYC 7004 portfolio, including Genoa, Bergamo, Genoa-X, and Siena.

From the launch of AMD's EPYC 2nd generation products Codenamed Rome back in August 2019, the release of the updated EPYC 7003 processors, including both Milan and Milan-X, the next generation of EPYC 7004 codenamed Genoa is expected to launch in Q4 2022. Genoa will feature up to 96 Zen 4 cores based on TSMC's 5 nm process node, with the new SP5 platform bringing support for 12-channel memory, PCIe 5.0, and support for memory expansion with Compute Express Link (CXL). 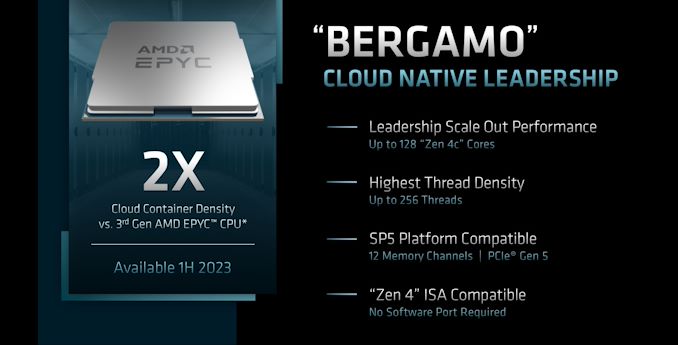 While Genoa will benefit from up to 96 Zen 4 cores and will be released towards the end of the year in Q4, AMD also announced Bergamo, which will be available in the first half of 2023, with Genoa-X and Siena also being available sometime in 2023. AMD's Genoa-X will feature up to 96 Zen 4 cores based on TSMC's 5 nm manufacturing node, with up to 1 GB of L3 cache per socket. AMD Siena will be predominantly targeted as a lower-cost platform and will feature up to 64 Zen 4 cores, with an optimized performance per watt, making it more affordable for the Edge and Telco markets.

Perhaps the most significant announcement on AMD's Server CPU Roadmap going into 2024 is the plan to bring its 5th generation of EPYC processors codenamed 'Turin' to market sometime before the end of 2024. As expected, AMD hasn't shed many details on the Turin family of processors, but we expect it to be named the EPYC 7005 platform to follow its current EPYC name scheme.

We know that the Zen 5 cores will be based on a 4 nm mode (likely TSMC but not confirmed) and a 3 nm version, as highlighted in AMD's CPU Core Roadmap through to 2024. AMD also states there will be three variants of the Zen 5 core in its CPU roadmap, including Zen 5, Zen 5 with 3D V-Cache, and Zen 5c.

From the latest roadmap highlighting AMD's EPYC products, we know that AMD's 5th generation of EPYC processors is expected to launch sometime before the end of 2024.