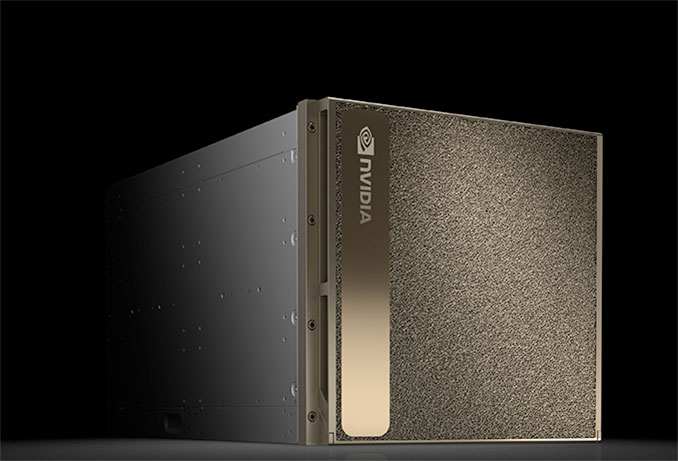 NVIDIA has introduced a new version of its DGX-2 server that is outfitted with higher-performing CPUs and GPUs. The DGX-2H server is powered by 16 Tesla V100 GPUs that run at higher clocks and feature a 450 W TDP each. The whole system consumes up to 12 kW of power and delivers 2.1 PetaFLOPS of compute horsepower.

NVIDIA’s DGX-2H is an updated version of the DGX-2 machine the company introduced earlier this year. The new system is based on Intel’s two 24-core Intel Xeon Platinum 8174 processor accompanied by 1.5 TB of DDR4 memory, as well as 30 TB of NVMe storage. The key improvements of the new server versus the previous one are faster NVIDIA Tesla V100 GPUs featuring 512 GB of HBM2 memory in total. Meanwhile, the new DGX-2H similar networking capabilities: 10/25/40/50/100 GbE.

UPDATE 11/29: NVIDIA has reached out to clarify a number of data points regarding the DGX servers, so the story has been updated.

Thanks to faster graphics processors with a 450 W TDP each, the system now can deliver 2.1 PFLOPS of compute performance, up from 2 PFLOPS before. Meanwhile, in a bid to increase power, it looks like NVIDIA had to switch to a new cooling method. ServeTheHome believes that NVIDIA also uses a new cooling subsystem as the DGX-2H weighs 20 pounds more than its predecessor (360 pounds vs. 340 pounds), though the company has not confirmed this. Along with performance improvements NVIDIA had to decrease maximum operating temperature of the DGX-2H from 35C to 25C.

NVIDIA has not disclosed pricing of the DGX-2H, though it is likely that it will cost more than $399,000, the price of the DGX-2. What remains to be seen is whether NVIDIA customers find the DGX-2H performance good enough for extra 2 kW of power consumption.