Coinciding with today’s launch of the R337 driver, NVIDIA has also updated their GeForce Experience (GFE) software to version 2.0. The updated beta drivers are available for notebooks as well as desktops, but as discussed in our 337.50 article, the actual benefit for single GPUs is limited to specific games. As for GFE 2.0, we’ve discussed many of the updated items in our recent NVIDIA 800M overview, but with the R337 drivers and GFE 2.0 the features become active for all users. The key updates are mostly focused on notebooks, with a few exceptions, but let’s quickly recap. 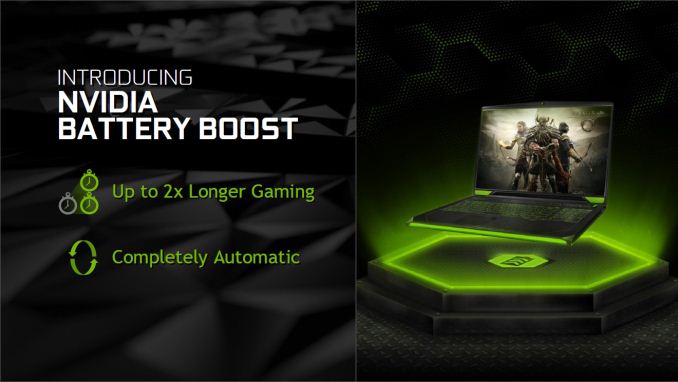 First, the new GTX 800M cards feature a technology called Battery Boost. I’ve been testing this with a GTX 880M notebook, and while the results vary with the game and settings you choose to run, the short summary is that you can realize gains of 25% to as much as 100% in battery life. A major component in Battery Boost is frame rate targeting, with an adjustable slider going from 20FPS to 50FPS, but NVIDIA is keen to point out that there’s more going on than simple frame rate limits. We’ll have some initial results in a review this week, and we’re working on more extensive analysis of the technology; it does work, however, so if you’re the type of gamer that want to be able to play games while unplugged, Battery Boost will at least get you well past the one hour mark – even on a beefy GTX 880M notebook. 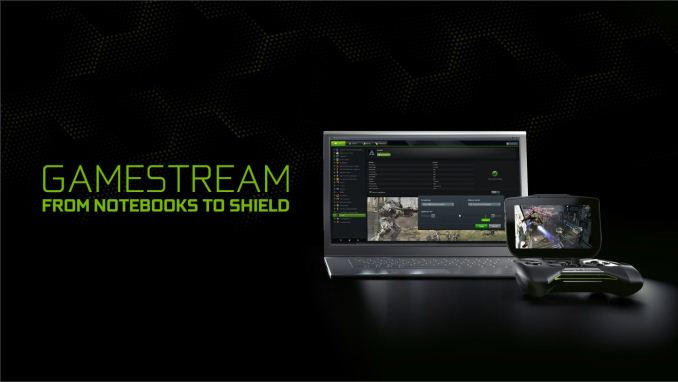 Two more additions to GFE 2.0 are support for GameStream and ShadowPlay on all GTX 800M laptops, as well as GTX 700M and select GTX 600M models. Basically, if you have a Kepler-based GTX notebook GPU, GameStream and ShadowPlay are now available. With many people now moving almost exclusively to notebooks, it makes sense that NVIDIA would extend these features to additional users. While the idea of streaming games from a mobile device to another mobile device might at first seem odd, Battery Boost and graphics hardware in general isn’t at the point where you can play games for hours at a time without an AC adapter, but SHIELD can do that and more with GameStream. You’ll need to turn down a few settings in some titles to achieve smooth frame rates, depending on your laptop GPU, but notebooks are now at the point where 30+ FPS at high detail settings is generally available. 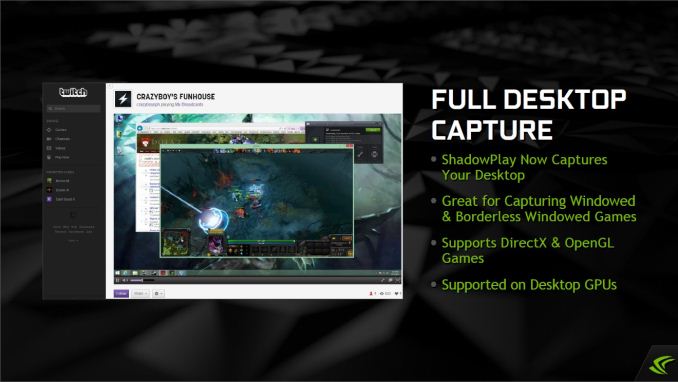 ShadowPlay meanwhile offers the ability to capture at the click of a button the previous chunk of gameplay. The performance hit is negligible, so if you want to share your best gaming moments with friends it can be very convenient. There’s a new feature being added to ShadowPlay as well – for desktop GPUs only right now, though we’ll likely see support for mobile GPUs as well in the future – Full Desktop Capture. This allows users to capture windowed gaming sessions, but it also extends to simply capturing your desktop content even if you’re not running a game. There’s a certain segment of gamers (and games) where playing in a window with the ability to switch to other windows is desired, with MMOs being the most common, so expect to see more “How to…” gaming videos cropping up in the future thanks to ShadowPlay. ShadowPlay is also receiving updates to the encoding settings, allowing the use of custom resolutions, bitrates, framerates, and more. 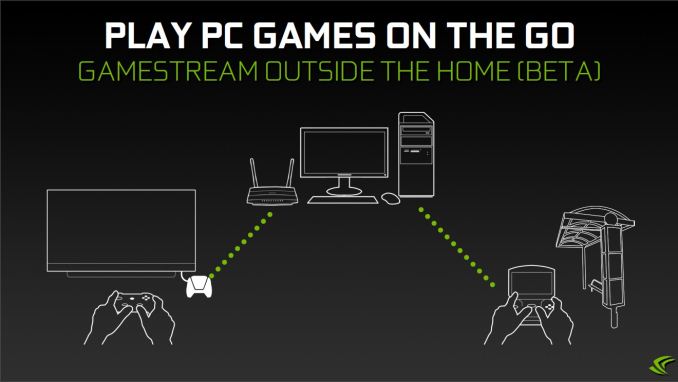 Finally, GameStream has a new beta feature launching with the new drivers and GFE: Remote GameStream. The idea is to take the concepts from GameStream and the GRID Streaming Beta and merge them to allow users to use GameStream while away from home. The GRID Streaming Beta incidentally was a cool idea that used a custom GPU farm run by NVIDIA to render games and stream them to SHIELD devices, but the quality of the games was somewhat limited (i.e. NVIDIA didn’t want to let everyone run each game at “max” settings). With Remote GameStream, since you’re using your own hardware, you can tune the settings to fully utilize your GPU, potentially allowing 1080p maximum detail gaming on your SHIELD. We haven’t had a chance to test this out yet, and the bandwidth requirement of 5Mbps upstream (from the host system) and 5Mbps downstream (to the SHIELD device) may limit the situations in which Remote GameStream is usable, which is why this is a beta release. Over time, we may see NVIDIA tune the performance to work better with lower bandwidths. Note that Remote GameStream will also require SHIELD Software Update 72, which includes Android "KitKat" 4.4.2 as well as other changes.

And that takes care of the GFE 2.0 update. NVIDIA continues to add titles to the GFE supported list, and they’re now up to more than 150 games (from the initial 80 games GFE launched with). For supported games, with any modern NVIDIA GPU (Kepler or Fermi I believe being the requirement), you can let GFE apply “smart” settings to optimize quality and performance so that you end up with a good gaming experience. Beyond simply helping users tune their quality settings, GFE has become a useful tool for receiving driver updates, recording gaming sessions, streaming games to a SHIELD device, and now helping to improve battery life while gaming on select notebooks. I didn’t think much of GFE when it first launched, but it’s come a long way in only half a year, and the 2.0 release marks a significant milestone for NVIDIA with plenty of new additions still in the works. For those that are interested, the full slide deck from NVIDIA is in the gallery below.