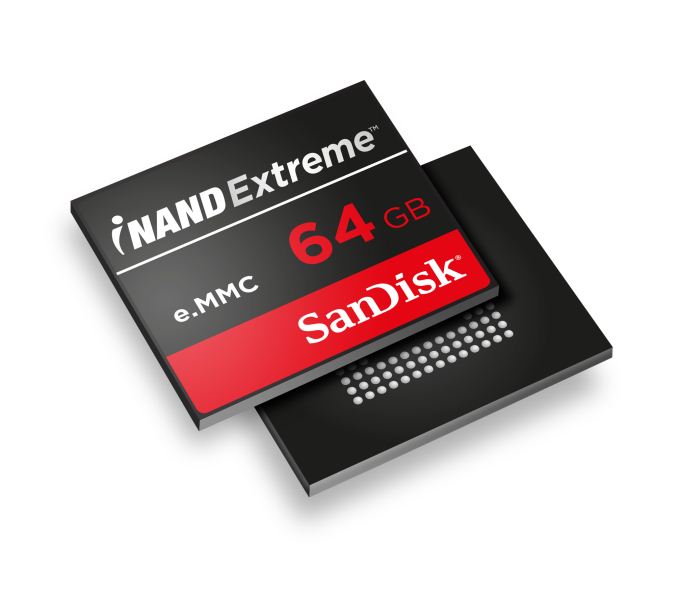 For the past couple of years we've been focusing more on tracking storage performance within smartphones and tablets. For the most part, we've come away disappointed. With smartphone ASPs trending downwards and many OEMs (other than Apple/Samsung) struggling to build healthy margins, internal storage is often leveraged as a high margin upsell and a cost optimized piece of the puzzle at the same time.

Sequential read/write performance has scaled reasonably well recently but random IO performance, particularly random write performance on a nearly full drive is very disappointing. With most devices incapable of more than a couple hundred random write IOPS, my recommendation to anyone has been to keep as much free space on your mobile device as possible in order to keep it feeling responsive. At MWC this week, SanDisk is offering another solution: a substantial step forward in high-end mobile eMMC performance.

Constrained by physical space limitations, smartphones and tablets typically leverage an integrated controller + NAND solution for storage. In some cases, a big silicon player may have an SSD controller on their applications processor and simply connect it to dumb, external NAND (e.g. the Apple approach). A lot of the time we just see a single-chip eMMC solution that integrates an eMMC controller and NAND.

SanDisk is a popular provider of these highly integrated mobile solutions, and is announcing the latest update to its iNAND Extreme family. 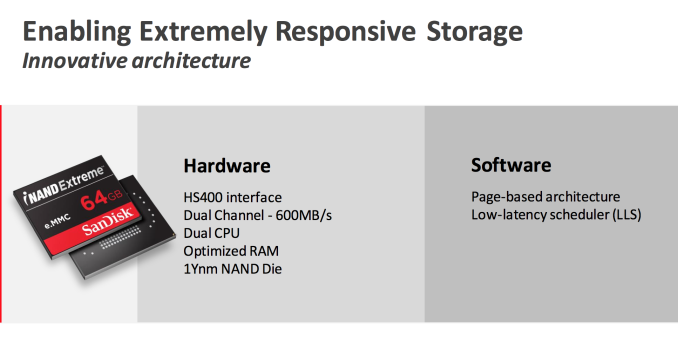 We're once again talking about a single-chip eMMC+NAND solution, but one that's much faster than previous incarnations. All implementations use SanDisk's own 1Y nm 2-bit-per-cell MLC NAND. In the new iNAND Extreme, SanDisk moves to a dual-CPU (one core for host operations and one for NAND management), dual-channel design. Multiple cores are common in high-end SSD controllers, so it's good to see mobile focused designs maturing to the same point.

The new iNAND Extreme implements eMMC 5.0 with a 400MB/s host interface. Internal to the design however are two 300MB/s channels connecting the controller and NAND. The bandwidth mismatch is designed to allow the device to work quicker internally to hide garbage collection and other cleanup latencies from the end user.

The old iNAND Extreme, much like most of the other eMMC solutions on the market today, was designed with a block based mapping architecture optimized for high sequential performance but low random IO performance. With the new iNAND Extreme, SanDisk moves to a page mapped architecture that has a significant impact on random IO performance as you can see in the table below. SanDisk does a pretty good job of dirtying its drives before running performance tests. Each drive is filled multiple times and around 10% of the drive is kept clean to simulate a heavy, real world use case. If SanDisk's testing description is indeed accurate, then the numbers below should be representative of what you'd experience on your phone/tablet:

The new iNAND Extreme uses 64Gbit MLC NAND die and at launch will be available in 16GB, 32GB and 64GB variants. SanDisk will eventually follow up with a 128GB variant with a whopping 16 NAND die on a single package.

Although the new iNAND Extreme has two NAND channels, it's possible to interleave requests to multiple die on each channel and thus we see a benefit to having more than 1 die per channel. Sequential read speeds are absolutely phenominal on the new iNAND Extreme. At 300MB/s we're not far off where full blown SATA SSDs were just a couple of years ago. Sequential write speeds have improved tremendously as well. At 80MB/s for the 32/64GB drive, we're talking about multiple times faster writes than what we see in leading phones/tablets today. 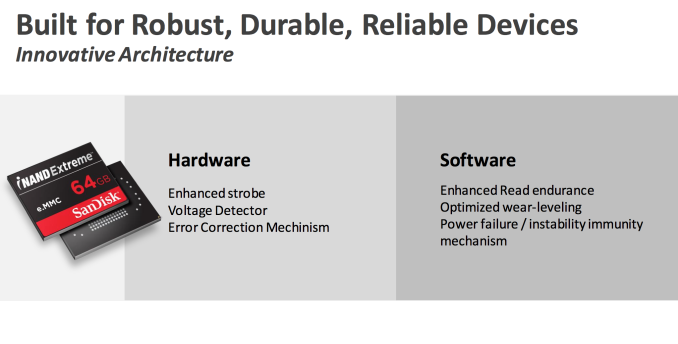 I've seen SanDisk's iNAND solutions used in Chromebooks before. It's not clear to me what's kept it out of a lot of the phones we typically review. I am also very curious about the power consumption, but SanDisk is aiming for everything from high end smartphones and tablets to notebooks with the iNAND Extreme so it had better be fairly low power. 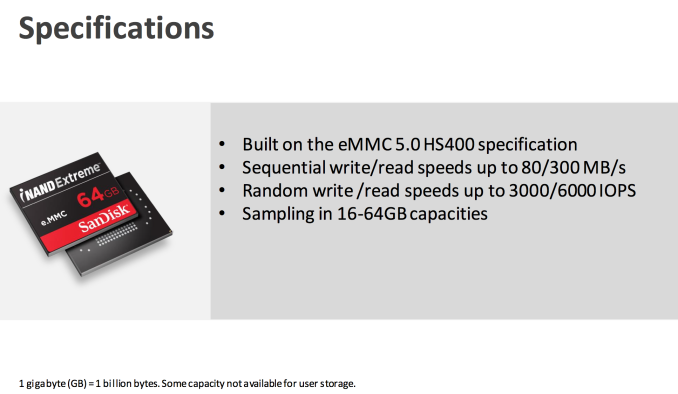 Needless to say I'm extremely excited to see an eMMC solution offer this level of performance. We've seen tremendous progress on CPU, GPU and connectivity fronts in mobile over the past few years, it's about time we saw the same with storage.