Only a year has passed since AMD officially spun off its manufacturing division with the help of ATIC. The resulting GlobalFoundries have been busy getting its ducks in a row in preparation for inevitable battle with TSMC. It started with construction of Fab 8 (formerly GF Fab 2) in Saratoga County, NY due for revenue production in 2012. Today GF is announcing plans to expand Fab 8 before its completion and an expansion to Fab 1 (formerly AMD Fab 30/36) in Dresden.

Global also announced initial plans to create a similar cluster of fabs in Abu Dhabi. These clusters are placed on a site that can house three manufacturing modules, similar to what’s being expanded at Dresden and being built in Saratoga County. Given that GlobalFoundries’ majority shareholder is ATIC, an investment arm of the government of Abu Dhabi, the next location for fab expansion makes perfect sense. 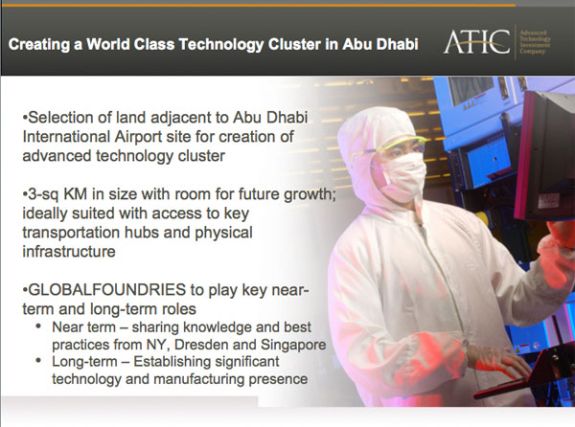 At the end of last year, ATIC announced that it would acquire Chartered Semiconductor for $3.9 billion. The acquisition gave GlobalFoundries a 300mm fab in Singapore. The move wasn’t about taking out a competitor, but rather acquiring a customer base on aging manufacturing processes and giving them the option of migrating to smaller transistor geometries, something Chartered didn’t have the roadmap to do. A very smart move on GlobalFoundries’ part. To make room for the planned growth we have the aforementioned expansions at Fab 1 and Fab 8.
Fab 1 will get a new facility that can manufacture 45/40/28nm wafers and take Dresden’s total maximum output from 50,000 wafers per month to 80,000. The first production from this expansion will ship in 2011. We can also expect to see initial 22nm development done here, with Fab 1 eventually shifting to 22nm production over time. 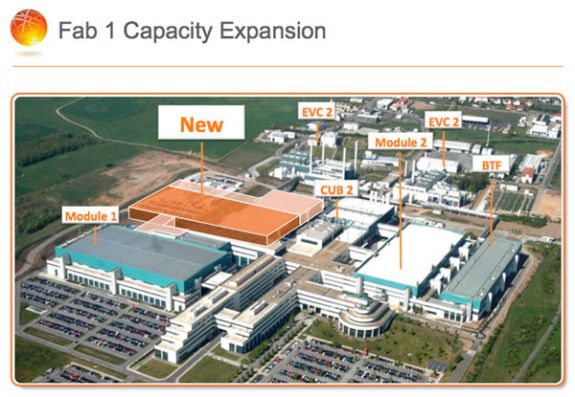 Fab 8’s clean room will grow another 40% by the time it’s done. The original plans for Fab 8 targeted 35,000 wafer starts per month, but with the expansion we’re looking at a maximum of 60,000 with additional equipment. 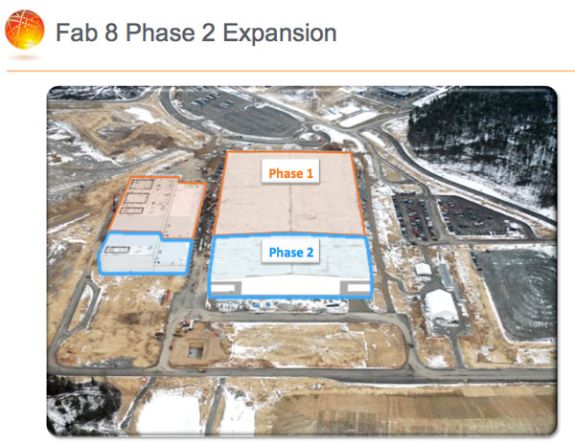 It’s not all good news though. Fab 8 is still expected to ship revenue generating wafers starting in 2012, but volume production won’t happen until 2013. Thankfully ATIC has very deep pockets.
GlobalFoundries has often mentioned to me that if it had a customer willing to pay for it, it could offer transistor size and performance on par with Intel. In the past, AMD simply hadn’t been willing (or able) to pay for it. The 3rd bullet point on the slide below seems to make that same statement publicly. 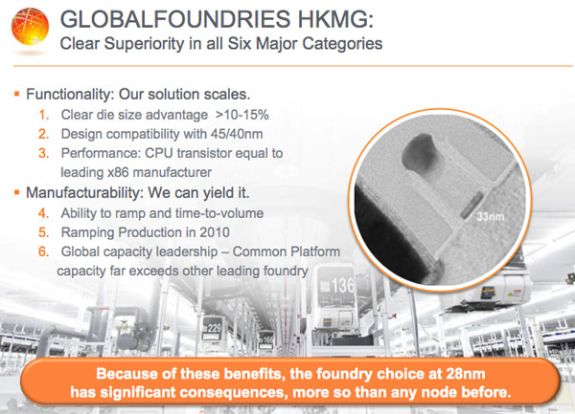 A good AMD design coupled with a good process from GF could do some damage. Will Bulldozer be that design? It’s far too early to tell. Personally I’m more interested in seeing what a GPU manufactured at GlobalFoundries would look like.
Tweet
PRINT THIS ARTICLE
Comments Locked