Microsoft MIX 2010 has drawn to a close, and with it comes our concluding wrap-up of everything that there is to discuss about Windows Phone 7 Series (henceforth WP7S).

Microsoft has tossed out the Windows CE-derived, aging UI of Windows Mobile. In its place, it has created a typographically-driven "user experience" that takes taken nods from Windows Media Center, the Xbox Dashboard, Zune HD interface, and urban signage. It calls this style "metro." 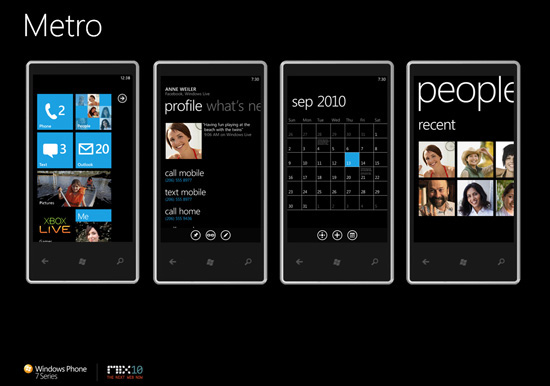 Instead of standalone application icons, WP7S uses "tiles." In practice, these are almost the same thing, except developers can both change the icon and dominant text to notify the user at-a-glance of status changes or updates. Tiles are supposed to be animated and dynamic. Tiles then launch into sessions and pages. The user interface bleeds off the sides - Microsoft wants people to navigate right to left across a page, teasing the user with elements from neighboring sections. Tiles are rearranged on start page much the same way they are on iPhone OS - pressing and holding levitates a tile, from which point you can either delete the tile (by clicking a broken heart) or drag and rearrange. 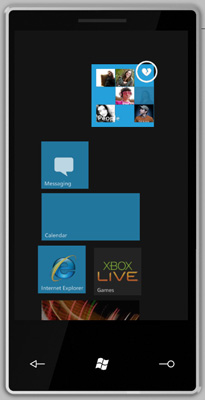 Tiles have feelings too...

Optionally, you can launch applications from a comprehensive list view as well.

The UI can be loosely customized, but right now it boils down to four different "accent" colors - which are the tile and UI highlighting colors - and "light" or "dark" for an either black text on white, or white text on black experience. Part of this customization is to leverage the battery-saving properties of AMOLED screens which consume far less power with white text on a black background.

Next are what Microsoft is calling "hubs." These are usually double-wide tiles, and serve as sort of an application for organizing your applications. For example, instead of having a lot of standalone applications which edit or modify photos spread throughout the launcher, you can optionally also launch them through the photo hub right alongside where you view pictures. Another example would be the way apps like Last.fm can themselves be launched from within the music + video hub, right alongside your Zune collection and play history. So far, there are hubs for people, pictures, office, music + video (Zune), marketplace, and games.

Note "apps" to the right. Microsoft is hip.

What each of the hubs do is pretty self explanatory. People is where you'll find all your exchange and local contacts, Pictures is for albums and slideshows, Office includes Excel, Word, and OneNote documents, and Music + Video bundles Zune music and videos alongside other media on WP7S. Marketplace is WP7S' take on an application store, and Games has tight integration with Microsoft's cloud services, including Xbox LIVE. More on that later.