MSI, along with other vendors has unveiled new motherboards for Intel's latest Alder Lake processors based on the more affordable H670, B660, and H610 chipsets. One of the most interesting MSI is the MAG B660 Tomahawk WIFI, which supports DDR4 memory, includes 2.5 GbE and Wi-Fi 6 networking, and provides plenty of USB 3.2 G2 connectivity on the rear panel.

Hailing from one of its most popular series of motherboards over the last couple of years, the Tomahawk typically offers users a decent feature set but at a more modest price point. The MAG B660 Tomahawk WIFI DDR4 is the latest in its 'arsenal' of MAG branded boards, with an all-black color scheme and an advertised 12+1+1-phase 'duet rail' power delivery. Providing power is a pair of 8-pin 12 V ATX CPU power inputs. 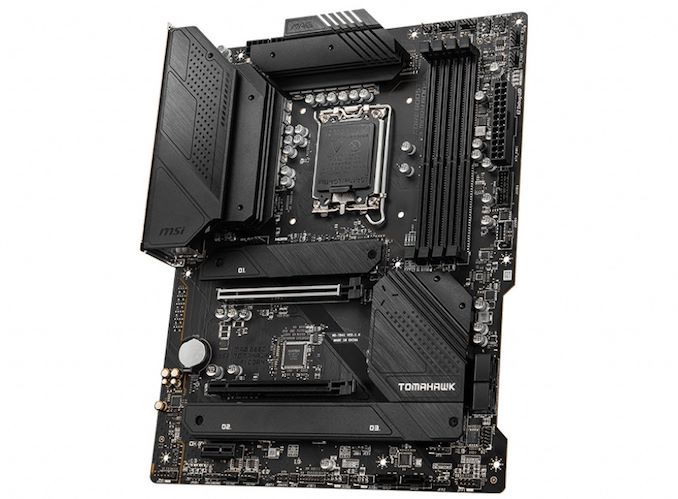 Focusing on memory, the MSI MAG B660 Tomahawk WIFI supports up to 128 GB of DDR4-4800 memory across four slots. For storage, it has a total of three M.2 slots, including one with support for PCIe 4.0 x4 M.2, one offering PCIe 4.0 x4 and SATA support, with a third slot supporting both PCIe 4.0 x2 and SATA based drives. Moving down to the lower portion of the board is the PCIe slots, with one full-length PCIe 4.0 x16, one full-length PCIe 3.0 x4, and one PCIe 3.0 x1 slot. Regarding SATA, there's a total of six ports, four powered by the chipset with support for RAID 0, 1, 5, and 10 arrays, and two powered by an ASMedia ASM1061 SATA controller.

For a B660 motherboard, the Tomahawk WIFI DDR4 offers a decent amount of rear panel connectivity, including one USB 3.2 G2x2 Type-C, four USB 3.2 G2 Type-A, and four USB 2.0 ports. Powering five 3.5 mm audio jacks and S/PDIF optical output is a Realtek ALC1220P HD audio codec, while MSI also provides a solid networking configuration consisting of a Realtek RTL8125B-CG 2.5 GbE controller and Intel-based Wi-FI 6 CNVi. Finishing off the rear panel is a pair of video outputs consisting of one HDMI 2.1 and one DisplayPort 1.4.

At the time of writing, the MSI MAG B660 Tomahawk WIFI DDR4 motherboard should start filtering into retail channels immediately, although US pricing is unknown at this point. However, we found it available to purchase at UK retailer CCL Computers at a reasonable price of £210.