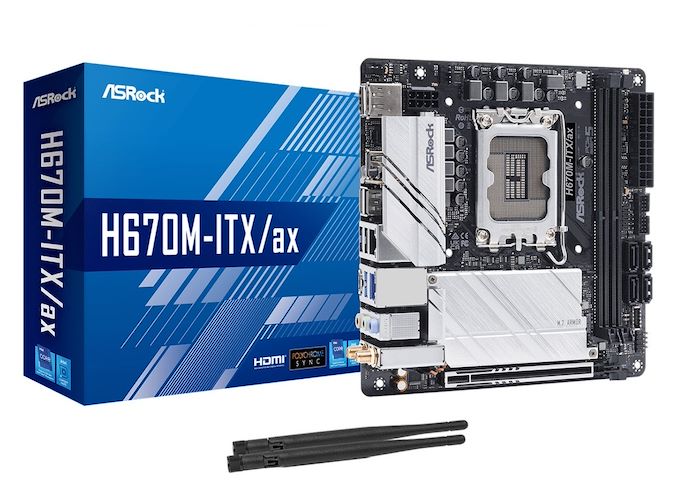 At CES 2022, ASRock unveiled a total of nine Value Series models based on Intel's latest 600 series chipsets, including one H670, three B660, and five H610 models. The ASRock Value Series offers entry-level features and options for users looking to harness the power of Alder Lake on a tight budget, with seven featuring support for DDR4 memory and two with support for the latest DDR5 memory.

One of the things that frustrated users at the initial launch of the Intel Z690 chipset was the lack of value. The Z690 models seem to be and are inherently more expensive than the previous generation. While there have been many theories and explanations floating around various online mediums such as Reddit, it's hard to deny that motherboards have been skyrocketing in price over the last couple of years. The other obvious pitfall is the current availability and pricing of DDR5 memory.

Enter the Intel H670, B660, and H610 chipsets that do have 'less' in terms of features compared to the performance and premium Z690 chipset, nor do they include over-engineered power deliveries impressive OLED panels like some of the flagships include. One of the things that the new 600 series chipsets do have is value. The ASRock Value Series offers users a lower cost and modest entry point to benefit from the improvements that Intel's 12th generation brings to the table, but without breaking the bank.

ASRock has announced just one 'Value Series' motherboard on the H670 chipset, the mini-ITX sized H670M-ITX/ax. It follows a basic silver and black color theme throughout, and ASRock is advertising an 8-phase Dr.MOS power delivery, with support for up to 64 GB of DDR4-5000 memory across two slots. 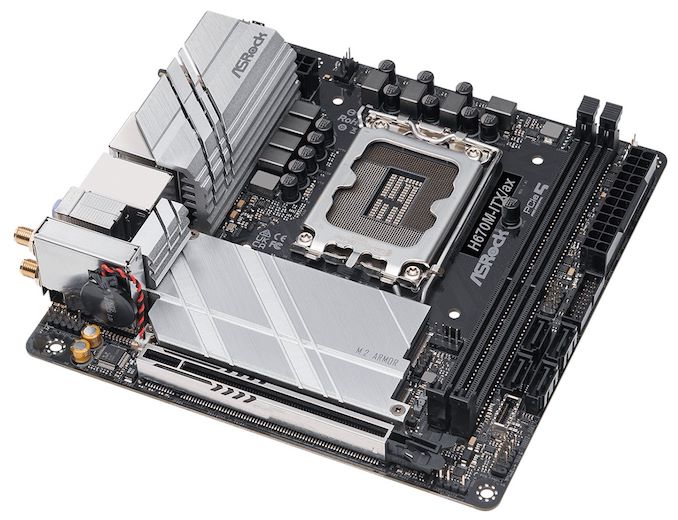 There are three ASRock B660 Value Series motherboards, including two micro-ATX options. The first of these is the ASRock B660M-HDVP/D5, which supports 64 GB of DDR5 memory across two slots and one full-length PCIe 4.0 x16, two PCIe 3.0 x1, and one legacy PCI slot. It also includes one PCIe 3.0 x4 M.2 slot, four SATA ports, a Realtek RTL8111H Gigabit controller, and uses a Realtek ALC897 HD audio codec. However, the B660M-HDVP/D5 doesn't have any USB 3.2 G2 support. 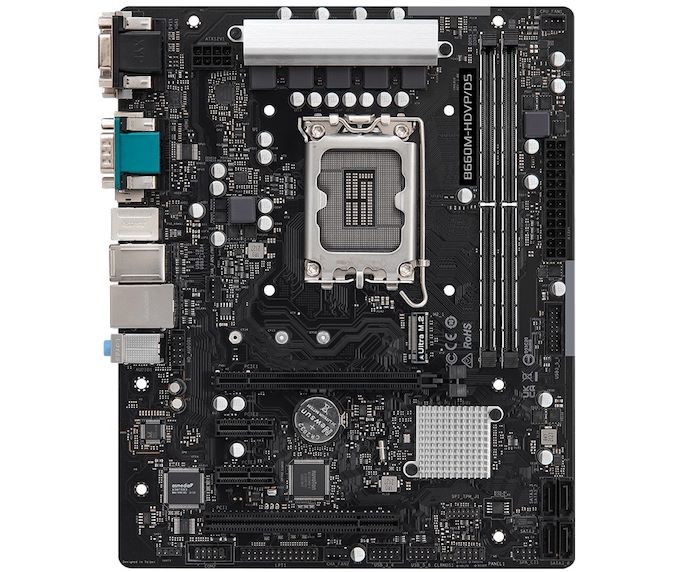 ASRock also has the B660M-ITX/ac, which is its only mini-ITX model based on the B660 chipset. It includes one full-length PCIe 4.0 x16 slot, supporting one PCIe 4.0 x4 M.2, and four SATA ports. There are two memory slots with support for up to 64 GB of DDR4-5000, with onboard audio capabilities consisting of a Realtek ALC897 HD audio codec, networking handled by an Intel I219-V Gigabit Ethernet controller, and like the other B660 Value Series models, it doesn't feature any USB 3.2 G2 connectivity.

For the most value-focused of Intel's 600 series chipsets, ASRock has five H610 motherboards available, four micro-ATX, and one mini-ITX model. The first of the micro-ATX models is the ASRock H610M-HDVP/D5, which has support for DDR5 memory, as well as an advertised 5-phase power delivery, a Realtek RTL8111H Gigabit Ethernet port, and a Realtek ALC897 HD audio codec. In terms of PCIe, there's a full-length PCIe 4.0 x16 slot, two PCIe 3.0 x1 slots, a legacy PCI slot, as well as one PCIe 3.0 x4 M.2 slot and four SATA ports. It also has a Serial COM port on the rear panel, with four video outputs, including one HDMI, one DisplayPort 1.4m, one DVI-D, and one D-Sub. 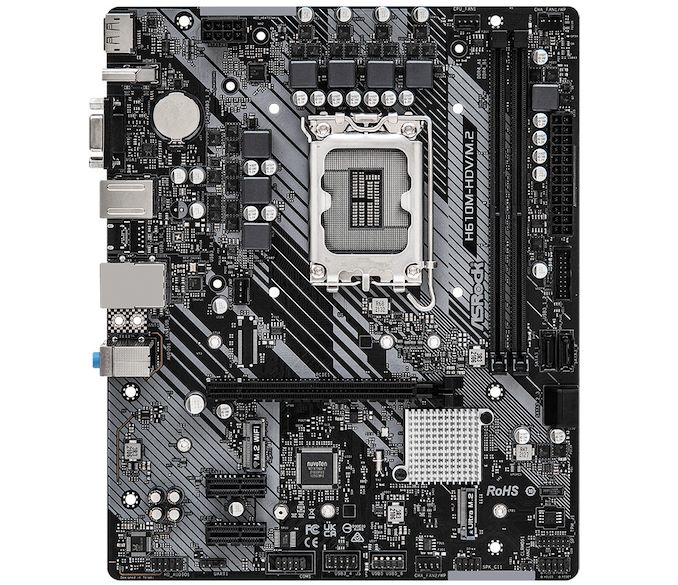 The ASRock H610M-HDV/M.2 has a black and grey PCB, supporting up to 64 GB of DDR4-3200 memory across two slots. There are one full-length PCIe 4.0 x16 and two PCIe 3.0 x1 slots, one PCIe 3.0 x4 and four SATA ports for conventional storage, and an Intel I219-V Gigabit Ethernet controller, with ASRock advertising both a Realtek ALC897 and 887 HD audio codec. The main feature of the H610M-HDV/M.2 is that it has a Key E M.2 slot for users looking at their own Wi-Fi CNVi.

ASRock also has the H610M-HDV and H610M-HDV models, which have no M.2 slots onboard. Both models feature one full-length PCIe 4.0 x16 slot, one PCIe 3.0 x1 slot, four SATA ports, and a Realtek RTL8111 Gigabit controller instead of the Intel variant. Both of these models use a Realtek RTL8111H Gigabit Ethernet controller, a Realtek ALC897 HD audio codec, with the only difference between the two being that the H610-HDV has a DisplayPort 1.4 video output. Both do, however, include a D-sub and HDMI video output pairing. 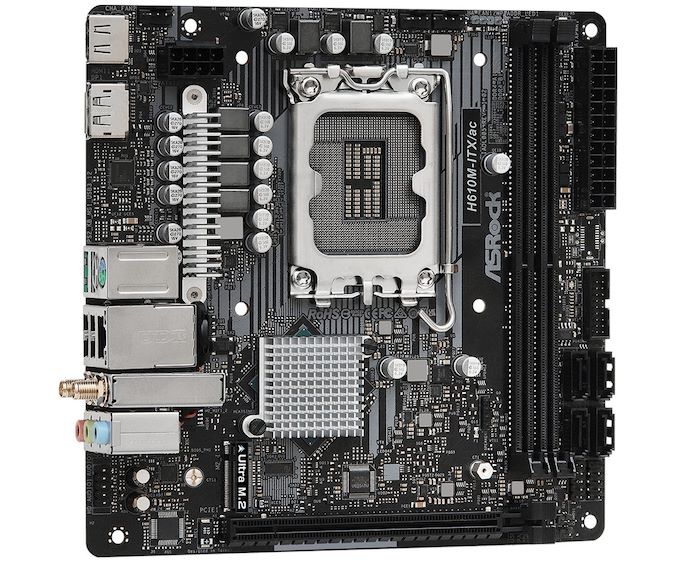 The only ASRock Value Series for mini-ITX is the H610M-ITX/ac, with one full-length PCIe 4.0 x16 slot, one PCIe 3.0 x4 M.2 slot, and four SATA ports. ASRock is advertising a 6-phase power delivery, with other features including an Intel I219-V Gigabit Ethernet controller and Wi-Fi 5 CNVi for networking, with a Realtek ALC897 HD audio codec taking care of the board's audio functionality. Like all of ASRock's other H610 models, none of these features any type of USB 3.2 G2 connectivity, nor do they include any level of support for USB Type-C.

ASRock hasn't specified when its H670, B660, and H610 Value Series motherboards will hit retail channels, nor have they provided any pricing.