Sponsored Post: Here Are All of the Z490 Motherboards Announced During Gigabyte’s AORUS Direct 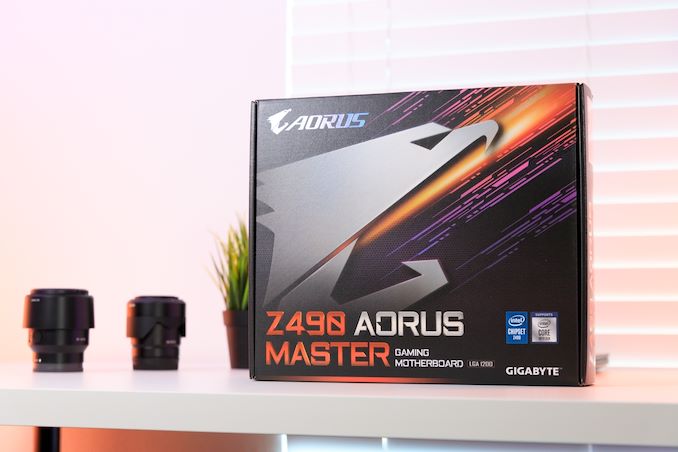 During its AORUS Direct event on April 30, Gigabyte announced a brand new line of motherboards: the Z490 series. These boards have been designed with Intel’s new elite 10th Gen desktop processors in mind, and come with a new chipset called Intel Z490 alongside a slew of impressive features and traits. Here’s a detailed overview of everything you need to know about these new motherboards, including a breakdown of the exciting technology in them and specific details about each model. 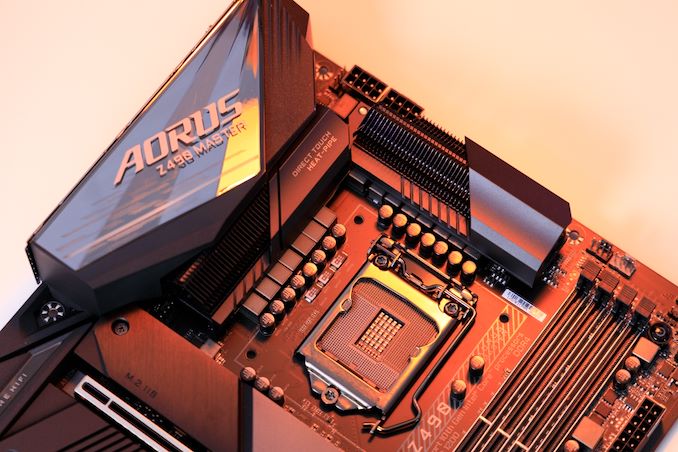 The Z490 motherboard lineup introduces plenty of new and exciting features that have never been seen on traditional desktop motherboards before. The most significant of these is a new power structure known as Extreme Power Design. This structure makes use of 90A power stages, an Intersil PWM controller, and 16 phases in its voltage regulator module (VRM). All of these powerful pieces of kit allow Z490 motherboards equipped with the Extreme Power Design to provide a whopping 1440A of power to your rig’s CPU, which is unprecedented in the desktop realm. With this kind of power, you can push your processor to its limits and then some without fear of power issues. Additionally, the advanced tantalum polymer capacitors that some of the motherboards use reduce the risk of voltage spikes by 22%, ensuring that the entire system remains stable throughout your gameplay experience.

Also new is Gigabyte’s XTREME MEMORY design that combines a dual in-line memory module (DIMM) system with shielded memory routing and more tantalum polymer capacitors. This structure makes it possible for Z490 motherboards to support RAM speeds of 4800 MHz and beyond, which is something that overclocking enthusiasts will no doubt love to hear.

In order to solve the issue of heat, Gigabyte has also made significant improvements to its cooling systems. Its Direct Touch Heatpipe system has been enlarged by 33% and given a narrower gap between the area where pipe and the motherboard’s aluminum heatsink meet. On top of this, the Fins Array cooling system has also been upgraded to a louvered design.  These narrow channels allow more air to make contact with the motherboard’s heatsink, thus reducing heat buildup. Finally, many areas of the motherboards have been given a special NanoCarbon coating and a baseplate of this material has been added to the design as well. This material is better at dissipating heat than regular materials, and as a result, the addition of NanoCarbon to Z490 motherboards improves cooling by 10%. All of these different cooling systems combined reduce temperatures by up to 32 degrees Celsius compared to a motherboard with none of them.

In terms of aesthetics, Gigabyte has focused on giving each and every Z490 motherboard a striking, angular appearance as part of its initiative to create its “AORUS Universe” where each product looks like something straight out of a futuristic movie or video game. The use of high-quality metals for these motherboards accompanies this style very nicely, and also improves the physical durability of the motherboards as well.

As a result of all these awesome new features, the motherboards found within the Z490 lineup are capable of supporting every single CPU core clocking in at a stellar 5.3 GHz. For gamers, this will mean an increase to your framerate, and content creators will be able to significantly reduce render times so that they can get more work done. 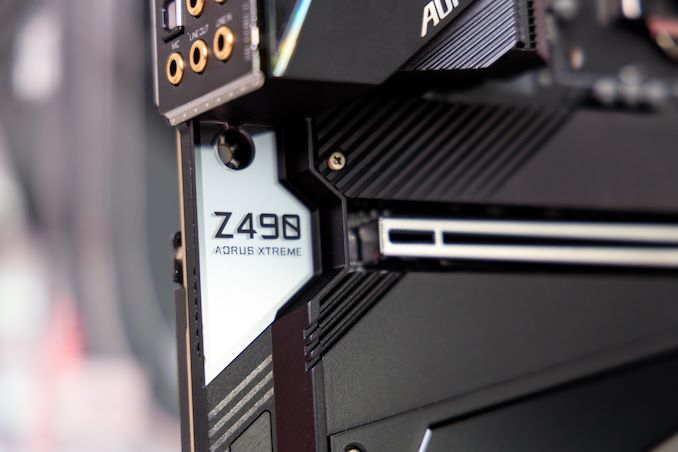 The majority of the new Z490 motherboards are of the AORUS variety, which are designed to be suited for gamers. The first — and most powerful — among these boards is the Z490 AORUS XTREME, which Gigabyte is calling its flagship motherboard. It’s outfitted with all of the advanced features and technologies listed in this article, as well as top-grade Hi-Fi equipment, support for Intel 2.5Gb ethernet and Wi-Fi 6, triple NVMe SSD slots, PCIe 4.0, and even Thunderbolt 3. Due to its elite quality, it will be the priciest motherboard at $799.99.

The next board in the lineup is the Z490 AORUS MASTER, which is a more affordable, high-end alternative to the Z490 AORUS XTREME. It lacks some of the advanced audio equipment that the XTREME has, doesn’t support Thunderbolt 3, and doesn’t have NanoCarbon on the Fins Array system. On top of this, it also has 14 phases in its Extreme Power Design instead of 16. However, it’s also priced much lower at $389.99, which will likely make it the overall favorite option for high-end PC owners.

Next up is the Z490 AORUS ULTRA. This motherboard is the mid-range pick in the lineup, as it uses a more traditional power structure instead of the Extreme Power Design and comes with 12 phases. In addition, it doesn’t have Hi-Fi audio features. Aside from this, though, it’s pretty much identical to the Z490 AORUS MASTER, and it even comes with NanoCarbon on the Fins Array that the MASTER lacks. It’s priced at $299.99, which strikes a nice balance between quality and cost.

Following the ULTRA is the Z490 AORUS PRO AX, which is the budget motherboard of the lineup. Compared to the ULTRA, it doesn’t come with any of the new cooling system improvements, and it doesn’t come with any tantalum polymer capacitors in its 12-phase power design either. Additionally, it only has two NVMe SSD slots. It does come with everything else that you can find in the ULTRA, however, and it’s priced lower at $269.99. 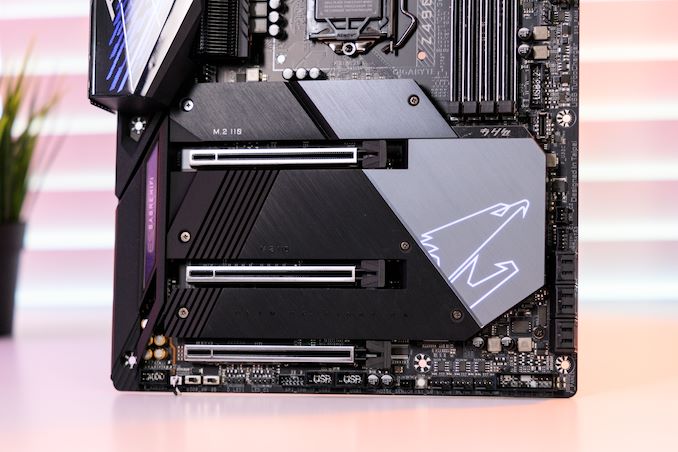 Don’t worry if you’re a fan of smaller PC builds, as Gigabyte has you covered with the next motherboard in the lineup, the Z490I AORUS ULTRA. This motherboard only comes with 8 phases, but it does use the advanced Extreme Power Design found in the Z490 AORUS XTREME and MASTER. That means that it comes with the 90A power stage as well as tantalum polymer capacitors. It doesn’t come with the cooling system upgrades or NanoCarbon plating, but considering how small of a form factor this motherboard has, that’s completely fine. It will retail for $269.99.

While most of the Z490 motherboards are meant for gaming, there are a couple that are geared towards content creators as well. These variants of the Z490, which are part of the VISION series, come with some unique features not found in the AORUS series. The first of these is the Z490 VISION D, which is the more powerful of the two VISION boards. It comes with similar Hi-Fi audio gear to that found in the Z490 AORUS XTREME, and an Extreme Power Design with 12 phases. Additionally, it comes with Thunderbolt 3 support, support for 32GB single DIMM memory, four total DIMMs instead of two, and it can even support two GPUs. It also comes with upgradeable M.2 expansion slots so that you’ll never run out of storage. It doesn’t come with the upgraded cooling that many of the AORUS motherboards have, but it does come with all of the same connectivity features like support for 2.5Gb ethernet and Wi-Fi 6. It’s priced at $299.99.

The other VISION motherboard is the Z490 VISION G. In many ways it is identical to the Z490 VISION G. However it does not have Hi-Fi audio equipment and also doesn’t support Thunderbolt 3. Instead, it uses USB 3.2 Gen 2 Type-C. The trade-off, though, is a lower price. The Z490 VISION G is less costly than the D variant, coming in at $199.99.

Lastly, there will also be two specialty motherboards available: the Z490 AORUS XTREME WATERFORCE and the Z490 AORUS ULTRA G2 Edition. The former is a variant of the XTREME motherboard that incorporates water cooling, while the latter is a version of the ULTRA that features a unique design inspired by Gigabyte’s partners at G2 Esports. Information about both of these motherboards can be found on Gigabyte’s website.

Gigabyte Motherboards Have Never Been Better 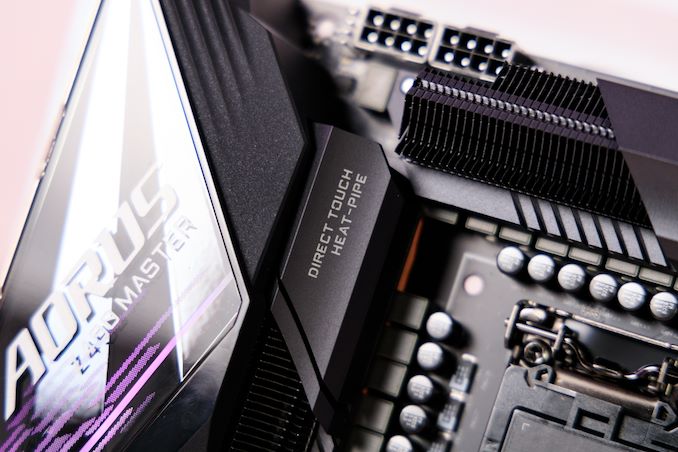 The Z490 lineup of motherboards represents the best of Gigabyte, and if you’re a PC user, things have never been as exciting as they are right now. Whether you’re an enthusiast who wants to have the best of the best, a casual PC gamer that wants something effective and affordable or a content creator who’s looking to take the entertainment world by storm, there’s a Z490 motherboard that will be perfect for you.