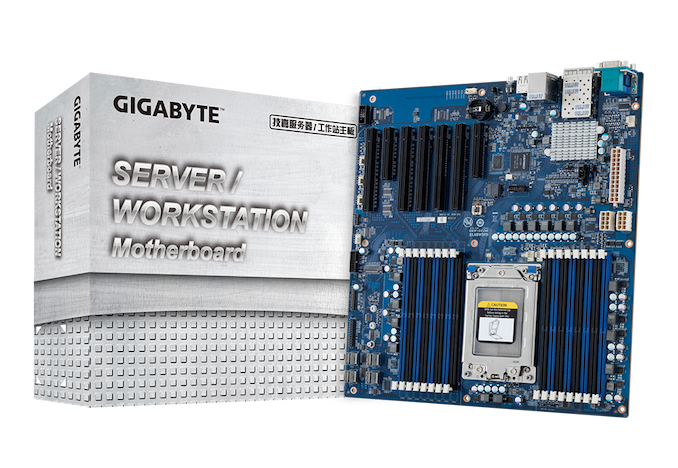 The workstation and server markets are big business for not only chip manufacturers such as Intel and AMD, but for motherboard vendors too. Since AMD's introduction of its Zen-based EPYC processors, its prosumer market share has been slowly, but surely, creeping back. One example of a single socket solution available on the market is the GIGABYTE MZ31-AR0. With support for AMD's EPYC family of processors, the MZ31-AR0 has some interesting components including its 2 x SFP+ 10 G Ethernet ports powered by a Broadcom BCM57810S controller, and four SlimSAS slots offering up to sixteen SATA ports.

As it stands, AMD has two versions of its EPYC range on the market: the first generation Zen series (called Naples), released in June 2017, and the Zen 2 based EPYC chips (called Rome). Each processor from AMD's EPYC families has support for 128 PCIe lanes and up to 2 TB of system memory operating in eight-channel mode.

Despite the GIGABYTE MZ31-AR0 being a server motherboard, it uses the regular E-ATX form factor, with with a single SP3 socket that, depending on the revision of the board, supports Naples (rev 1.x) or both Naples and EPYC (rev 2.x). This ranges from base 8 cores 16 thread model (EPYC 7251), all the way to a 64 core and 128 thread variant (EPYC 7742).

EPYC is focusing on both performance and IO, and so along with a lot of PCIe lanes on offer, the MZ31-AR0's primary features includes a Broadcom BCM 57810S dual SPF+ 10 G Ethernet controller which adds two 10 G ports onto the rear panel. For maintenance, an Aspeed AST2500 powered remote management controller provides BMC functionality, with a D-sub 2D video output with a dedicated Ethernet port for direct access. 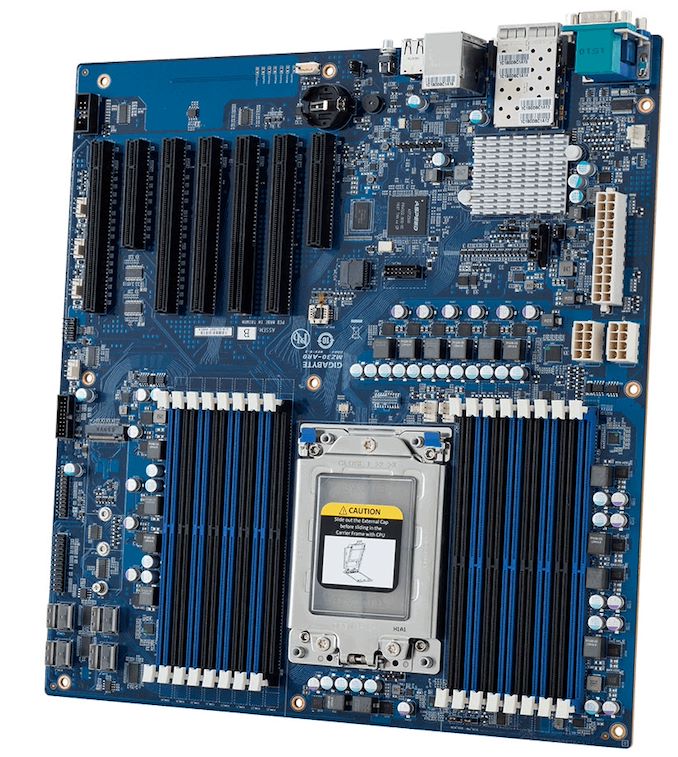 Both revisions of the board are limited to PCIe 3.0, even with Rome, but the board makes the most of the available PCIe 3.0 lanes. The GIGABYTE MZ31-AR0 has four full-length PCIe 3.0 x16 slots, one full-length PCIe 3.0 x8 slot, with a further two full-length PCIe 3.0 x8 slots given this board a total of seven full-length slots. This is an impressive array of PCIe support and is equipped to make the most of the 128 lanes available from the processor. Equally impressive is sixteen memory slots set up in two banks of eight slots either side of the SP3 socket which offers eight-channel support. These slots support both RDIMM and LRDIMM DDR4 modules up to a maximum capacity of 2 TB, with DDR4-2666, DDR4-2400, and DDR4-2133 all supported. 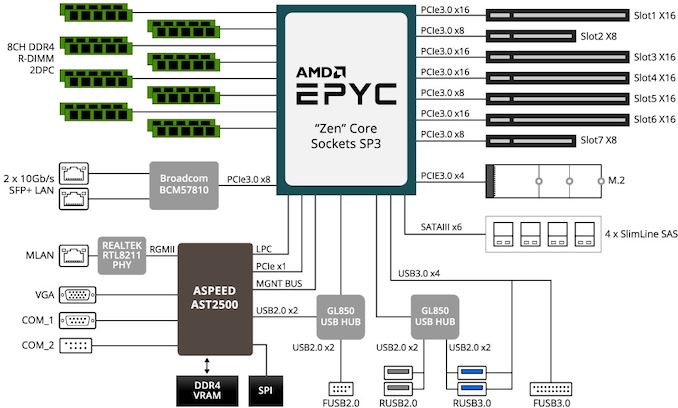 For storage, the GIGABYTE MZ31-AR0 is well-equipped with four SlimSAS ports with each slot supporting four SATA drives, with a combined total of sixteen available for use. Interestingly, the MZ31-AR0 is equipped with a single PCIe 3.0 M.2 slot. Some users may have expected a second M.2 slot due to the board's large E-ATX form factor, but alas that is not the case. Focusing on the design, the board layout implies it would be more than suitable for rackmount deployment in a 1U chassis, which it is, although it can also be used in a permitting chassis that features E-ATX support. The positioning of the single 24-pin motherboard and two 8-pin CPU 12 V ATX connectors fit in line with support for 1U chassis, with GIGABYTE offering its own 1U solutions for users to capitalize on. The SP3 socket is rotated with this in mind for better airflow in a server situation.

From a performance perspective, we compared the MZ31-AR0 against an ASRock server model as well as other 16-core Zen compatible boards. Everything is in line with the competition - POST times are higher than anticipated, but this can be put down to the BMC initialization process. The performance in relation to power consumption is also a little higher than the ASRock model we tested, but it is EATX (versus ATX) and is pretty stacked, to say the least.

The GIGABYTE MZ31-AR0 currently retails for $565 at Amazon, and as a result of its current price point has a couple of competitive rivals on the market. One such example is the Supermicro MBD-H11SSL-NC  which retails for $470 at Newegg, although with a much lesser networking configuration, and with fewer memory slots. Another example is the ASRock Rack EPYCD8 model with a current selling price of $460, which is in a similar with Intel dual 10 G Ethernet but has fewer memory slots.

Both of the Supermicro and ASRock examples are also ATX, whereas the GIGABYTE MZ31-AR0 is E-ATX, and as a result has more space to include the better memory support and premium dual 10 G SPF+ networking which it includes. For the extra $100 over the ASRock and Supermicro models, the MZ31-AR0 looks like a solid choice based on value and specifications, which in this area given the pricing of AMD's EPYC Zen-based processors, is a very worthy trade-off against the competition.

Read on for more extended analysis.