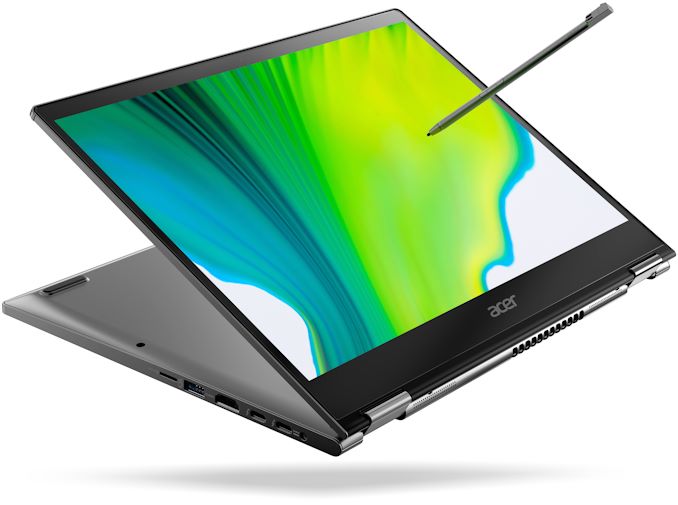 Today at CES 2020, Acer has introduced its new inexpensive Spin 3 and Spin 5 convertible laptops that are based on Intel’s Ice Lake processors. The hybrid mobile PCs are slimmer than their predecessors and provide significantly greater graphics performance, especially when it comes to higher-end models. Both machines will ship with optional Acer’s new Active Stylus with Wacom AES technology that offers 4096 pressure levels, which will be welcomed by creative professionals.

Conceptually, the new Acer Spin 3 and Acer Spin 5 share many similarities. Both are based on Intel’s 10th Generation Core 'Ice Lake' processors, both come in tough aluminum chassis to ensure durability, both use IPS displays and LPDDR4X memory to prolong battery life, both have Thunderbolt 3 ports to connect various bandwidth-hungry peripherals (external graphics, advanced storage, etc.), both are equipped with audio subsystem with Acer True Harmony enhancements, and both come with Windows 10 Home, which emphasizes their target audience. Meanwhile, being conceptually similar, these notebooks have a number of important differences that set them far apart.

The Acer Spin 3 model SP314-54N is a convertible laptop with a 14-inch Full-HD display panel is an IPS offering with ‘up to 170° viewing angles'. The PC weighs around 1.5 kilograms and comes in a chassis that is 16.9 mm thick.

Connectivity wise, the Acer Spin 3 (SP314-54N) laptop has just about everything that one might need these days, including Wi-Fi 6, two Thunderbolt 3 ports, two USB 3.1 Gen 2 connectors, an HDMI output, a microSD card reader, and a 3.5-mm jack for headsets.

Acer says that its upcoming Spin 3 will offer up to 12 hours of uptime on its 48 Wh battery, which is in line with promises of other makers of 13/14-inch machines.

Sales of Acer’s Spin 3 will begin next month in EMEA, where it will cost starting at €649. The product will arrive to North America in April, where prices will start at $699.

The Acer Spin 5: A Sub-$900 Ice Lake with Premium Features

The Acer Spin 5 model SP513-54N hybrid mobile PC is a considerably more advanced system than the Spin 3. First up, the system comes with a slightly smaller 13.5-inch IPS display panel with a 2256×1504 resolution and a 3:2 aspect ratio that is believed to be more comfortable to use for web browsing than a 16:9 aspect ratio of the Spin 3. Secondly, the Spin 5 weighs 1.2 kilograms and comes in a chassis that is 14.9 mm thick, 2 mm thinner when compared to the Spin 3. 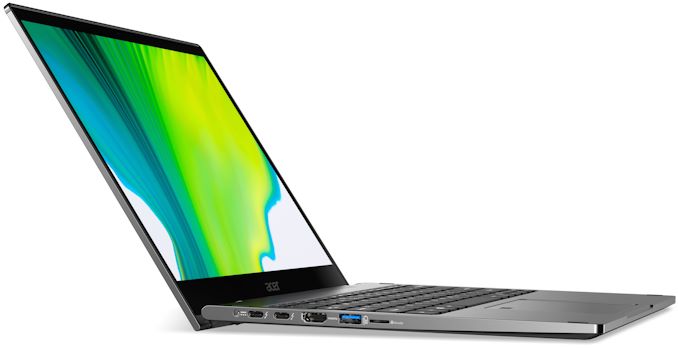 Acer decided to equip its Acer Spin 5 (SP513-54N) convertible with Intel’s quad-core Core i5-1035G4 or Core i7-1065G7 processor featuring Iris Plus ‘G4’ and Iris Plus ‘G7’ integrated graphics with 48 EUs and 64 EUs, respectively. The CPU is paired with up to 16 GB of LPDDR4X memory as well as a PCIe 3.0 x4 SSD with capacities up to 1 TB (and to emphasize the premium nature of the device, this system does not offer a 128 GB SSD). The connectivity side of the latest Spin 5 is similar to that of the Spin 3, so it will support Wi-Fi 6 as well as Thunderbolt 3 among other things.

Despite being thinner and lighter than the Spin 3, the Spin 5 comes with a higher-capacity 56 Wh battery that enables up to 15 hours of runtime, according to Acer.

The more advanced Spin 5 convertible will hit EMEA in March carrying price tags from €999. Customers in North America will have to wait for the new Spin 5 till June and pay from $899.