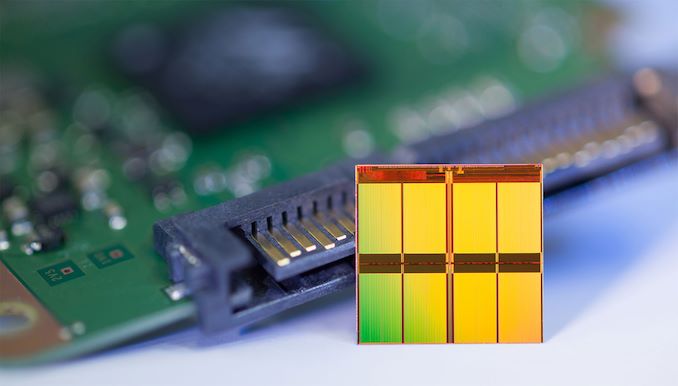 Despite cuts in wafer starts by almost all NAND producers, and even disruptions in Kioxia (former Toshiba Memory) and Western Digital's fab operations, analysts estimate that bit shipments of NAND increased in the third quarter. Luckily for manufacturers, so did demand, which helped to keep the actual average selling price of NAND between between flat and -10%, depending on the manufacturer.

Avid readers know that as flash manufacturers transition to higher-density 3D NAND flash architectures with more layers and/or more bits per cell, they inevitably increase the total number of bits shipped. This in turn creates memory oversupply (in terms of bits) and intense price declines. To avoid those price declines, manufacturers have been cutting down wafer starts at their fabs, as well as slowing down capacity expansions and further ramping up existing fabs. These decisions did not particularly help NAND manufacturers keep per-bit prices at their desired levels back in the third quarter, but they will likely have an effect in the future. Only SK Hynix reduced its bit shipments – by a mere 1% – which may as well be flat.

Meanwhile, other companies increased their bit shipments as demand for memory grew in Q3, with the largest consumers of NAND flash — such as Apple and Samsung Mobile — preparing for the holiday sales spike. At the same time, ASPs of NAND flash decreased by 5% to 10%, according to TrendForce, a division of DRAMeXchange. The slow down in capacity expansion will eventually have an effect on ASPs, but only time will till how exactly this will work out.

Now, let’s take a look at the numbers in more detail.

Samsung retained its position as the global No. 1 supplier of NAND, which is not surprising given the company’s strong positions on SSD and smartphone markets. With a 33.5% market share and a 10% growth in bit shipments, Samsung is well ahead of its rivals.

Kioxia and Western Digital suffered the power outage in the Yokkaichi province of Japan back in June. But despite the loss in production, both companies posted a strong bit growth of 9% and 20% respectively. Interestingly, Kioxia even increased its market share to 18.1%, whereas Western Digital's share declined to 13.7%.

With a 12.9% market share, Micron posted a 10% increase in bit shipments; revenue however fell 5%.

Focused primarily on enterprise-grade SSDs, Intel was, perhaps, the biggest winner in the third quarter, based on the numbers provided by TrendForce. With a 50% increase in bit shipments amid a 10% drop in ASP, the company is selling a whole lot of NAND – albeit at lower prices.

SK Hynix is the only company that saw its bit shipments decline in Q3. Overall, SK Hynix commanded 9.6% of the NAND market in Q3.

With further advances in 3D NAND memory manufacturing, bit oversupply is something that is hard to avoid, so we're expecting to see ASPs per bit to decrease going forward. Which means both costs and selling prices will continue to fall. And while this translates decently well into lower prices for retail SSDs and flash memory cards, unfortunately, this isn't likely to translate to big gains for consumers of smartphones and pre-built systems. Big OEMs have been hesitant to increase the amount of NAND available in their handsets, especially entry-level SKUs, so we've seen the amount of NAND available in these SKUs (and their prices) stay pretty static over the last couple of years.

Meanwhile, one thing that we have to keep an eye on is the ‘Others’ position in the table above. Today, this  includes Chinese YMTC and some specialty players that command all of 0.7% of 3D NAND sales globally. To a degree, TrendForce’s data hints that YMTC has yet to ramp up its 3D NAND manufacturing lines, but given was production capacities at its disposal, it seems like it's only a matter of time until the company can capture a meaningful share of the NAND market.