Samsung Unveils The Galaxy A70: A Mid-Range Smartphone With a Sizable 6.7-Inch Display 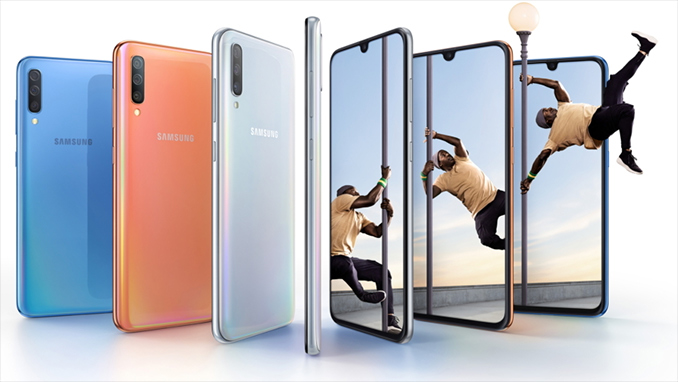 While Samsung may be best known in the smartphone space for their Galaxy S line of flagship phones, those phones alone aren't the reason that Samsung is currently the world's largest smartphone manufacturer. Instead, Samsung's stupendous volume is built on the back of offering a top-to-bottom range of phones, from flagship to entry level. And though these other phones don't get the same level of attention from the public (or the press), make no mistake: they're just as important a part of Samsung's overall Galaxy smartphone lineup.

To that end, this week Samsung is unveiling the latest in their Galaxy A-series of mid-range smartphones, the Galaxy A70. The phablet-sized phone sports a rather sizable screen, incorporating a 6.7-inch AMOLED display that Samsung calls their "Infinity-U" display. Paired with a 32 MP primary camera and a yet-to-be-disclosed 2+6 core SoC, it's clear that Samsung is aiming to deliver a more "premium" mid-range phone. However we're going to have to wait a bit longer to see just what specific market segment Samsung is going after – and what Samsung prices the phone at – as this week's announcement is really more of a teaser ahead of a full reveal on April 10th.

Starting things off with the screen, the Samsung Galaxy A70 is equipped with a 6.7-inch Infinity-U screen, which offers a 2400x1080 resolution in a 20:9 aspect ratio. The extra tall aspect ratio still makes the phone's display big by virtually any standard, but less so than you might otherwise assume from its official 6.7-inch diagonal length. Meanwhile, under the Infinity-U display is an in-display fingerprint scanner, as well as a raindrop notch cut into the display the selfie camera. Samsung calls design of the phone ‘3D Glasstic’ which, as far as we can tell, means a metallic skeleton, glass on the front, and gradient plastic on the back.

The camera capabilities of the Galaxy A70 look very solid for a mid-range handset. The rear camera array features a 32 MP main camera, an 8 MP ultra-wide camera, and a 5 MP depth sensor. There is also a 32 MP camera for selfies on the front, and this camera also supports facial recognition (courtesy of Samsung’s software).

Meanwhile at its heart, the Galaxy A70 smartphone is based on an SoC powered by two high-performance 2 GHz cores as well as six energy-efficient 1.7 GHz cores. The SoC is accompanied by 6 or 8 GB of RAM as well as 128 GB of NAND flash storage (expandable with a microSD card). Officially, Samsung is not disclosing the SoC it's using. But digging through the company's product stack, Samsung has at least one SoC in its arsenal that has a similar core configuration and supports a 32 MP camera: the Exynos 7904. So although it's by no means guaranteed, with these specs we'd be surprised to see Samsung using anything else.

Other capabilities of the Galaxy A70 will be unveiled next month, but it is all but given that the phone will feature 4G/LTE, 802.11ac Wi-Fi, Bluetooth 5.0, all modern navigation systems, and other "baseline" smartphone radio features. Meanwhile, Samsung says that the phone's integrated 4,500-mAh battery will last for a day of active usage.

Overall, it's interesting to see just how the mid-range smartphone space has evolved over a relatively short period of time. Just a couple of years back these handsets typically featured mediocre screens along with SoCs that used only low-power cores. So the Galaxy A70 and its large AMOLED display, advanced triple-module camera, and SoC with ‘big’ high-performance cores stands out for a non-flagship phone. Though we'll just have to see if Samsung is able to keep the phone's price below flagship levels as well.

Wrapping things up, Samsung’s Galaxy A70 will be available later this year in four gradient colors, including Coral, Blue, Black, and White. As mentioned earlier, this week's announcement is a bit of a teaser for the company, and Samsung plans to disclose more information about the handsets at a special event on April 10.