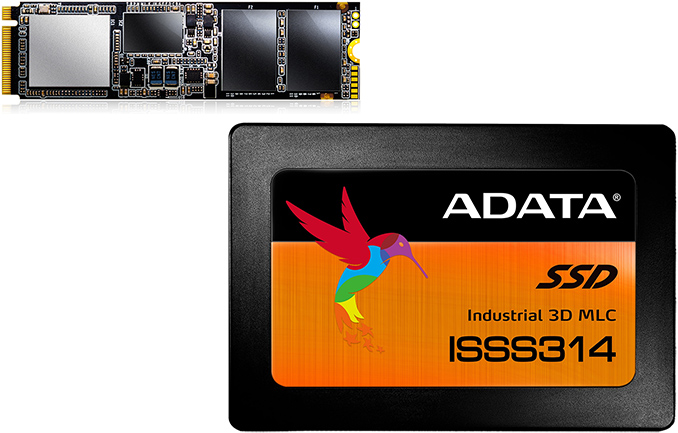 ADATA has introduced two new families of 3D NAND-based SSDs aimed at industrial applications. Dubbed the ISSS314 and the IM2P3388, these drives are designed to handle extreme temperatures as well as humidity levels, allowing them to work reliably in very tough environmental conditions. The more powerful IM2P3388 drives use a PCIe interface and offer high performance levels along with a powerful ECC engine and encryption, whereas the less speedy ISSS314 uses a SATA interface and offers very low power consumption that barely tops 2.5 W.

The ADATA IM2P3388 is an M.2 drive that uses a NVMe PCIe 3.0 x4 interface and is based on 3D MLC NAND. This specific drive is designed to withstand ESD and EMI, up to 20 G vibration and 1500G/0.5ms shock, extreme temperatures from –40°C to +90°C, as well as high humidity (5%-95% RH, non-condensing). To put it into perspective: the IM2P3388 drives can operate in Antarctica or in the Lut Desert in Iran. In the real world, ADATA’s new SSDs will serve inside space-constrained industrial or commercial PCs, servers, military-grade systems, and embedded computers.

The IM2P3388 drives are based on a Silicon Motion controller that ADATA does not name, we suspect is the SM2260 with some additional customization. As for the NAND, the IM2P3388 SSDs use carefully selected 3D MLC that can handle high temperatures for prolonged amounts of time. The IM2P3388 takes advantage of all the capabilities of the controller and therefore supports AES-256 encryption, TCG Opal 2.0 spec, end-to-end data protection, and so on. In addition, the drive has multiple sensors that monitor its condition.

As for performance, ADATA specifies the drive to offer up to 2.5 GB/s sequential read speeds and up to 1.1 GB/s sequential write speeds (when pSLC caching is used), but does not specify random performance. ADATA’s IM2P3388 will be available in 128 GB, 256 GB, 512 GB, and 1 TB configurations. Keeping in mind the high density of modern flash chips, expect the entry-level models to be slower than their higher-capacity counterparts. In general, expect performance  of the IM2P3388 to be comparable to the XPG SX8000 drives featuring the SM2260 and 3D MLC.

The ADATA ISSS314 SSDs come in a traditional 2.5”/7 mm drive form-factor and use a SATA 6 Gbps interface. In order to satisfy the diverse needs of customers, ADATA will offer the ISSS314 in 32 GB, 64 GB, 128 GB, 256 GB, and 512 GB configurations. The higher-end models will provide up to 560 MB/s sequential read and up to 520 MB/s sequential write speeds, whereas the entry-level drives will be considerably slower. As for power consumption, the new SSDs are rated to only use up to 2.5 W, which puts them into the energy efficient category. 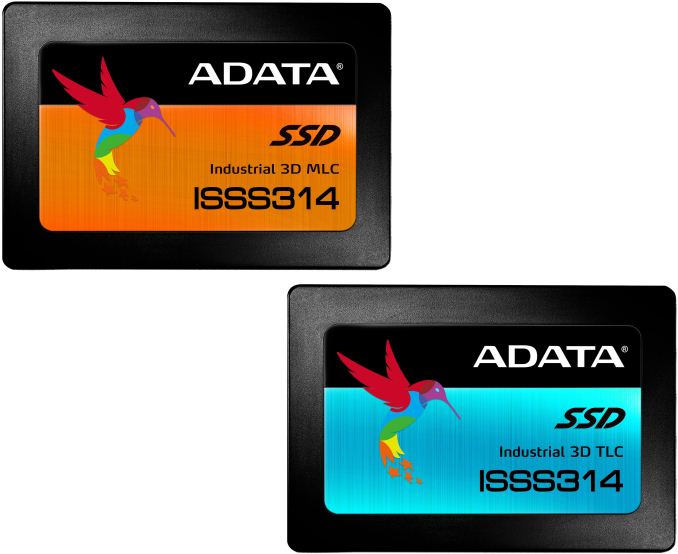 The ISSS314 SSDs are based on an unknown controller as well as 3D MLC and 3D TLC NAND memory sorted using ADATA’s proprietary A+ testing methodology to find the higher quality chips. The industrial ISSS314 drives based on 3D MLC memory are rated to withstand shock, EMI, and extreme temperatures from –40°C to +85°C, and thus are aimed at industrial applications. By contrast, commercial 3D MLC ISSS314 SSDs are rated for –10°C to +80°C operation. Meanwhile, the 3D TLC-powered ISSS314 is guaranteed to work in a temperature range from 0°C to +70°C, but can also withstand shocks, ESD, EMI, and so on. As for features, all the ISS314 SSDs have S.M.A.R.T, a temperature sensor, hardware power detection, and flash protection.

ADATA does not publish recommended prices for its industrial and commercial SSDs. Since such products rarely show up in mainstream retail, their actual prices for customers typically fluctuate depending on the order size and other factors.