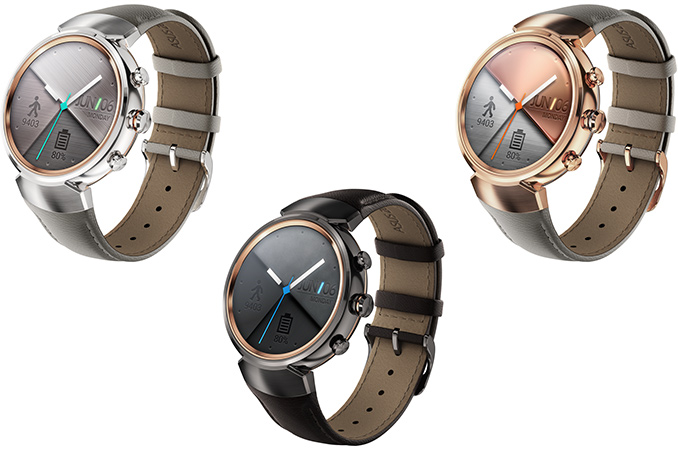 ASUS introduced its third generation ZenWatch at the IFA trade show on Wednesday. The ZenWatch 3 wearable features a new case design with round display and uses a more energy-efficient hardware platform when compared to its predecessors. The manufacturer claims that its new timepiece can work for two days on a single charge, which is longer than many contemporary Android Wear-based devices. Besides that, it can be charged quicker thanks to HyperCharge technology.

The ASUS ZenWatch 3 (WI503Q) will be one of the industry’s first devices to use Qualcomm’s Snapdragon Wear 2100 SoC (APQ 8009w) with four ARM Cortex-A7 cores, an Adreno 304 GPU, integrated wireless connectivity (802.11n Wi-Fi, Bluetooth 4.0, NFC, GPS, etc.) and so on. ASUS says that the new SoC consumes 25% less energy when compared to the Snapdragon 400 (which was used for the previous two generations of ZenWatches) and therefore stretches out the battery life of the new device. The new processor is accompanied by 512 MB of LPDDR3 memory, 4 GB eMMC NAND flash storage, six-axis gyroscope and accelerometer as well as an antenna for Wi-Fi and Bluetooth. The new SoC is not the only improvement under the hood of the ZenWatch 3. The manufacturer claims that the new smartwatch has higher precision activity tracking than predecessors and competitors, which means that the novelty is equipped with improved sensors.

Besides changing the hardware platform, ASUS also changed the design of the ZenWatch 3. The new smartwatch comes in a classic round case made of 316L stainless steel that is 9.95 to 10.75 mm thick. Because of the new form-factor, ASUS also had to change the display of its ZenWatch 3 and equipped its device with a 1.39” AMOLED 2-point touchscreen with 400×400 resolution (287 PPI). The case is IP67 water resistant and the display is protected with curved Corning Gorilla Glass 3. ASUS plans to offer three color schemes for its ZenWatch 3 — silver, gunmetal and rose gold, as well as rubber and leather straps. All three versions of the ZenWatch 3 have a distinctive rose gold bezel around the screen to further emphasize the new classic look.

Unlike its predecessors as well as other Android Wear-based smartwatches, the ASUS ZenWatch 3 comes with three buttons. Right now, we do not know what each button does, but the addition of extra two buttons may mean either certain new functions or just improved comfort when using existing ones.

Since the ZenWatch 3 timepiece is Google Android Wear-based, it will be compatible with smartphones running modern versions of Apple iOS and Google Android OSes.

ASUS plans to begin shipments of its ZenWatch 3 this fall. The price in Europe will start at €229 and the price in the U.S. should be similar in USD.