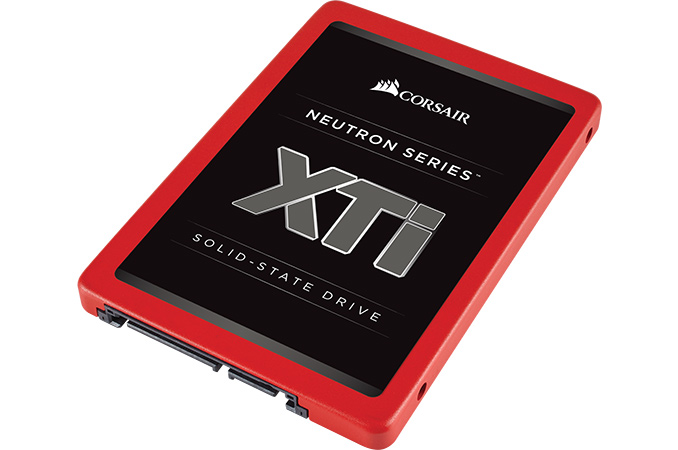 A number of SSD suppliers have released drives based on the Phison PS3110 S10 controllers, with most of these coming in Q4 2014 or Q1 2015 and targeting performance mainstream customers. This year, some of the SSD vendors are not only reconsidering the positioning of such drives, but are actually introducing new models featuring a larger amount of NAND flash or even better performance but still using the same controller. Corsair last week introduced the Neutron XTi family of SSDs with the same Phison PS3110 S10 controller but with improved performance and capacities over the older XT SATA SSD line.

The Corsair Neutron XTi series of SSDs includes models with 240 GB, 480 GB, 960 GB and 1920 GB of NAND flash memory. Just like many other drives featuring the Phison PS3110 S10 controller, the Neutron XTi utilizes MLC NAND made by Toshiba and given the timing, it is highly likely that the SSDs feature MLC produced using the company’s 15 nm fabrication process. Just like the original Neutron XT, the new series also supports end-to-end data protection, static and dynamic wear-leveling and so on.

Performance-wise, the new Neutron XTi are as fast as the aging Neutron XT. The manufacturer declares transfer speeds of up to 560 MB/s for sequential read and up to 540 MB/s for sequential write. Random performance is up to 100K read IOPS and up to 90K write IOPS. When asked about differences between the Neutron XT and the Neutron XTI, Corsair revealed that the newer drives feature improved caches as well as different firmware, which should make them generally better than the predecessors. However, exact specifications for each capacity were unavailable at the time going to press. If we get new information, we'll update the table below.

Between the Neutron XT and the Neutron XTi lines are the newer NAND and the addition of a 1920 GB model to the lineup. Last week we already discussed the reason why SSD makers collaborating with Phison are adding 2 TB or sub-2 TB models to their families: as the price of NAND has declined significantly over the past few quarters it is now economically feasible to offer drives with such capacities to users who require a lot of solid-state storage but still use PCs that only support the SATA interface.