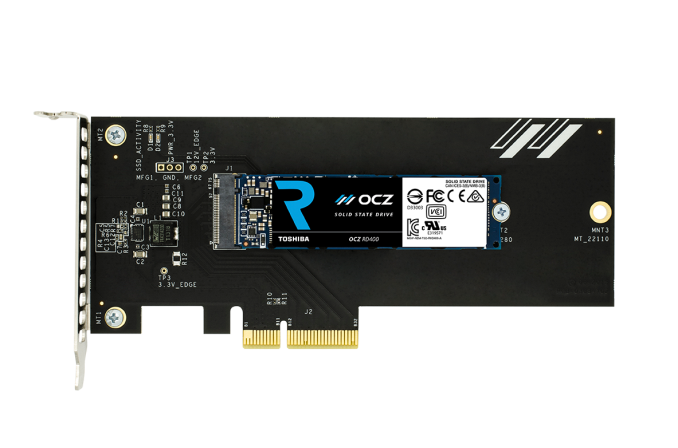 Having recently assimilated OCZ and turned it into an enthusiast-oriented consumer brand, Toshiba has released their first M.2 PCIe SSD into the consumer market. Initially previewed by OCZ as the RevoDrive 400, the new OCZ branding scheme shortens it to RD400. This is the first RevoDrive/RD product with a native PCIe SSD controller and the first PCIe 3 SSD from OCZ.

The RD400 uses Toshiba 15nm MLC and a Toshiba-branded controller that we know almost nothing about. Given how the Toshiba-branded controller in the Trion/TR drives seems to be based on the popular third-party Phison S10, we suspect the RD400 may be using a controller that is also based on a third-party design, most likely the Marvell 88SS1093. Our first look at what would become the RD400 showed that it wasn't the OCZ Jet Express controller, and if Toshiba had another entirely in-house controller that could compete at this level they would probably be talking it up more. The Marvell 88SS1093 is an 8-channel 3-core controller with performance specifications that are similar to the RD400.

Whatever the source of the controller, it makes for a far simpler design than the RAID controller and multiple SandForce SSD controllers used in previous RevoDrive SSDs, and it makes the M.2 form factor an option for the first time. 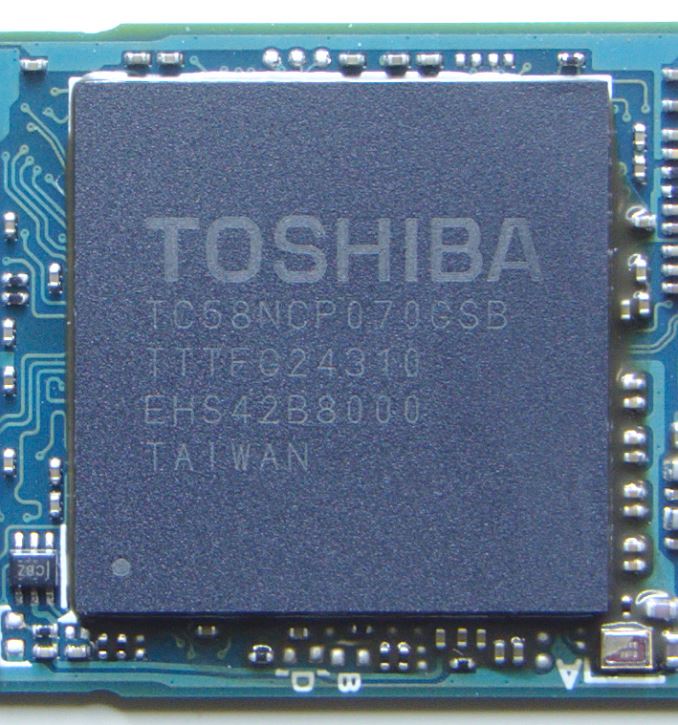 The RD400 shares its hardware with the OEM-only Toshiba XG3 M.2 SSD but the RD400 has different firmware and comes with a custom NVMe driver for Windows that Toshiba says offers better performance than Microsoft's driver. The Toshiba XG3 was announced in August 2015 and we have since encountered it in the Microsoft Surface Pro 4. As a retail product, the OCZ RD400 will not only benefit from the OCZ custom driver, but is also supported by their SSD managment utilities, and is optionally sold with a PCIe x4 to M.2 adapter that includes a thermal pad under the SSD controller. The SKUs that come with the drive pre-installed in the adapter are referred to in some documents as the RD400A, but the M.2 module is the same with or without the adapter.

The PCIe x4 to M.2 adapter adds $20 to the price tag but may be a welcome option for some desktop users. The card itself is generic and bears OCZ branding but has no specific reference to the RD400. Unlike most cheap adapter cards, the RD400's adapter draws power from the PCIe slot's 12V supply and converts it to the 3.3V required by the M.2 drive. All of our power and performance numbers for the RD400 in this review reflect the effect of the bundled adapter's thermal pad and the overhead of the voltage conversion. Thus, this review is of the RD400 in a typical desktop environment rather than in a notebook environment.

Toshiba's overhaul of the OCZ brand has changed the OCZ SSD Guru software into the OCZ SSD Utility and the ShieldPlus Warranty into the Advanced Warranty Program, but the relevant details are the same. Toshiba has also added a new software tool: CLOUT, the Command Line Online Update Tool. Based on an internal testing tool, it offers all the management capabilities of the graphical SSD Utility but from a scriptable command line interface. The ability to perform a secure erase from a script and without having to reboot to Linux is a killer feature for me as a drive reviewer, and the fully automated testing it enabled made the RD400 the first drive to complete our suite of benchmarks in under 24 hours per drive.

The RD400 comes on the market at a time where it's only the second retail M.2 NVMe drive, as while the newer protocol has gained traction, the longer lifecycle of SSD controllers means that it's taking designers a while to update to NVMe. The competition for the RD400 consists primarily of the Samsung 950 Pro - getting Samsung some needed competition in the retail M.2 space - and the Intel SSD 750, the two which have been the two highest performance PCIe SSDs in the consumer market. They're also two of the most expensive current-generation consumer SSDs for sale: the Samsung 950 Pro is selling for 0.62–0.70 $/GB while the Intel SSD 750 is between 0.87 $/GB and 1.00 $/GB. The 256GB and 512GB RD400 models that compete directly against the Samsung 950 Pro have MSRPs below the current 950 Pro prices, which gives Toshiba some room to be competitive even if performance is lower. The 1TB and 128GB models of RD400 on the other hand have less aggressive MSRPs, likely owing to the lack of direct competitors currently on the market.