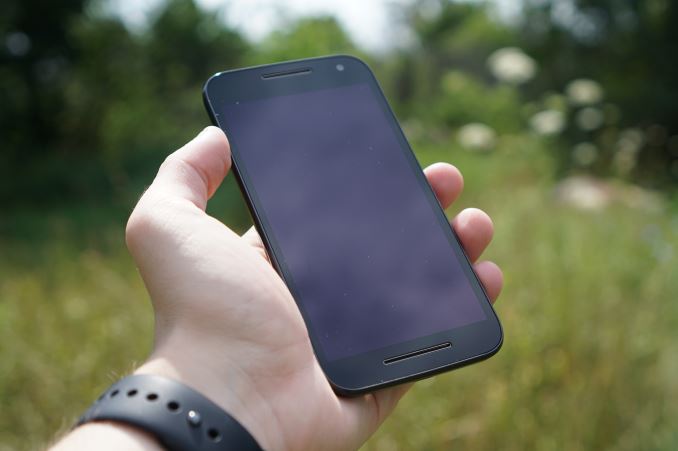 Motorola's original Moto G was one of the first Android devices to offer what one could honestly call a good user experience at a price of around $200. It had a 4.5" 720p display, Qualcomm's Snapdragon 400 SoC, a 5MP rear camera, 1GB of RAM, and 8GB of memory. Since that time, Motorola has adopted a structure where their Moto E fills in the sub $150 range, the Moto G hovers around $200, and the Moto X acts as a several hundred dollar flagship device, although the dual Moto X launch for 2015 changes this slightly. In early 2014 we saw Motorola refresh the Moto G with support for LTE, and later in the year they did a more major refresh which bumped the display size to 5", the camera resolution to 8MP, and added the microSD slot from the LTE model of the original version.

While Motorola's 2014 refresh of the Moto G was technically a major update as far as their yearly cadence was concerned, many aspects of the phone remained the same. There was no change to the SoC or the amount of RAM, no change to the display resolution or connectivity, and no change to battery capacity. The early 2015 launch of the Moto E made things even stranger, as it shipped with some specifications that actually outclassed the Moto G, such as Qualcomm's Snapdragon 410 SoC. This put Motorola in a strange situation, which has finally been resolved with the new 2015 model of the Moto G. In my view, this is the first truly major update that the phone has seen since the original version, and you can see what improvements Motorola has made in the chart below.

As you can see above, this year's iteration of the Moto G brings along some significant improvements. For the first time ever, we're seeing an update to the Moto G's SoC. While both the first and second generation models used Qualcomm's Snapdragon 400 SoC with four 1.2GHz Cortex A7 cores, this year's model adopts a 1.4GHz version of Snapdragon 410 with four Cortex A53 cores. The battery also receives a hefty bump in capacity, although this does come along with an increase in height, width, and thickness, as well as a slight increase in mass. Memory remains the same for the base model at 8GB of NAND and 1GB of RAM, but an extra $40 bumps that to 16GB of NAND and 2GB of RAM.

The rear-facing camera moves from Sony's IMX179 sensor to IMX214 which interestingly enough is the same improvement that was made going from the Nexus 5 to the Nexus 6. The sensor size increases from 1/3.2" to 1/3.06", and the resolution is bumped to 13MP from 8MP. This means that pixel size drops from 1.3 micron to 1.12, and low light scenarios may see a reduction in image quality as a result, but the wider F/2.0 aperture can help to offset this. The front-facing camera also jumps from a 2MP to a 5MP sensor.

Connectivity and the display don't see any improvements with this upgrade. We're still looking at a 5" 1280x720 IPS display, and with WiFi and Bluetooth you get 2.4GHz 802.11n and Bluetooth 4.0 LE.

At this point, Motorola's industrial design is fairly well known and understood. All of their devices, from the Moto E all the way up to the Nexus 6, have essentially the same chassis shape with differing dimensions. The big difference between Motorola's devices is the materials that are used. While Moto Maker allows users to customize their devices to some extent, more expensive devices may have special options like wood back covers, and may have metal frames around the chassis rather than plastic ones. Being a mid-range smartphone, the Moto G is made primarily of plastic. 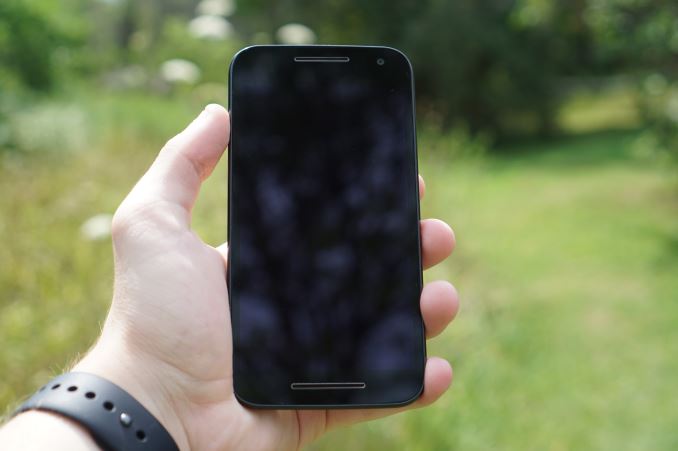 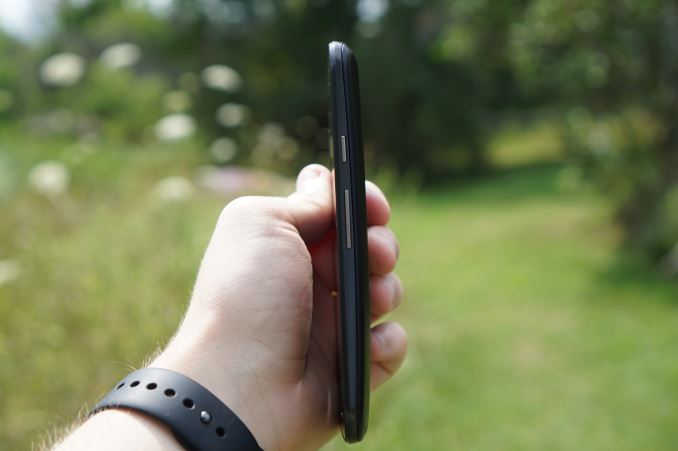 When it comes to the front face and sides the 2015 Moto G continues to share a design with Motorola's other devices. It has speakers sitting above and below the display, and a front facing camera sitting to the right of the upper speaker. The sides are flat on the edge that meets the display, and curved on the edge that meets the back cover. Both the power button and volume rocker are located on the right side of the phone, and the power button has the same texture to it as the Nexus 6 and Moto E, which makes it easy to tell apart from the volume rocker. Something that does concern me a bit about the sides of the device is the large gap between the back cover and the rest of the device. There are points where the gap is wide enough that you can feel it decreasing in size when you grip the phone in that area, which concerned me both because it negatively impacts the feel of the device, and because the Moto G is supposed to be waterproof. 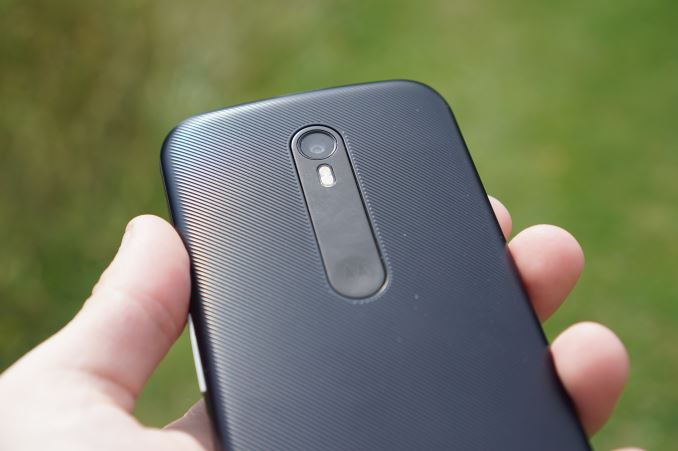 The back of the 2015 Moto G is where things depart slightly from how Motorola devices usually look. On older Motorola devices, the rear-facing camera sat above a small indent which had the Motorola logo inside it. The camera flash either sat between the logo and the camera, or was integrated into the ring around the camera itself. All of these features were separate and sat flush with the back cover. The new Moto G and Motorola's recently launched Moto X devices now have a strip which connects the camera, flash, and Motorola logo and puts them slightly below the level of the back cover. 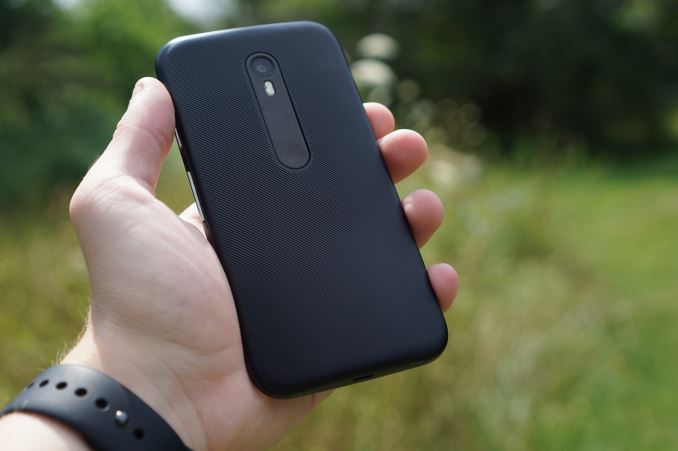 Since the Moto G can be customized with Moto Maker, there will potentially be differences between a consumer's device and the review unit I have. In my case, the Moto G's back cover is made of black plastic, with a series of raised diagonal lines which gives it a different feeling from a device with a smooth back like the Moto E. I personally prefer the in hand feel of this back cover to the smooth slippery plastic on the Moto E, and I think the black color goes very well with it. 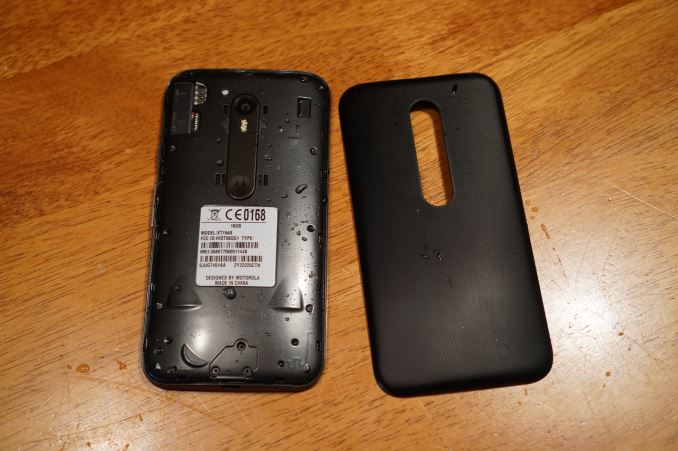 As I mentioned earlier, the Moto G is waterproof. Its IPX7 rating specifies that it can be submerged up to 1 meter deep for up to thirty minutes. While I didn't push the device to that limit just due to worries about possibly damaging a review unit, I did put it under thirty centimeters of water for around twenty minutes and it did not sustain any damage. All back covers for the third generation Moto G have plastic sections that fit into and protect the open ports on the back of the phone from any water getting in. While there was absolutely no damage, you can see above that water was able to get between the back of the chassis and the back cover even though I made sure to secure the back cover tightly and properly. I don't believe this to be any cause for concern, but I felt it was worth sharing. With a removable back cover this issue can't really be avoided, and the inserts that block important ports have kept water out of the areas that need to be protected.

In the end I think the 2015 Moto G has a good feel in the hand, and I think the build quality is more than acceptable for a phone that starts at $179. I definitely prefer the textured back cover to the smooth and slippery ones on some other Motorola phones, and if you're given that option I would definitely opt for it. My only complaint is that the back cover doesn't attach as tightly to the phone as I would like, and you can notice the gap when you touch it at the edges. The gap also seems to be big enough to let water through, but the protective covers on the back cover ensure that the phone won't get damaged.