Like the 2015 Moto E, the Moto G uses Qualcomm's Snapdragon 410 MSM8916 SoC. This is the first time Motorola has updated the SoC in the Moto G, with both the first and second generation models using the same 1.2GHz Snapdragon 400 SoC. Because the Moto G shares an SoC with the Moto E one might think this means they are equal in speed. However, the SKU in the Moto G has a peak frequency of 1.4GHz rather than the 1.2GHz in the Moto E. This is somewhat confusing because both are named MSM8916, but it's not dissimilar to how Snapdragon 615 devices run at either 1.5GHz or 1.7GHz on the big cluster.

As far as clock speed goes, the Moto G is 17% faster than the Moto E. It's difficult to estimate how much improvement will be seen compared to the older Moto G models, as the core architecture moves from Cortex A7 to Cortex A53 which comes with its own improvements in IPC in addition to the higher clock speed. It's also important to note that we are testing the model of the Moto G with 2GB of RAM, and this is another factor that can increase performance when comparing to Motorola's 1GB devices. Ultimately, it's important not to assume how much faster the Moto G will be based purely on the CPU frequency, even though it can give some idea about performance relative to other devices with the same CPU but a lower frequency. In order to properly characterize the Moto G's performance relative to many other devices, we turn to our standard workflow of web based benchmarks, followed by PCMark and BaseMark OS II. 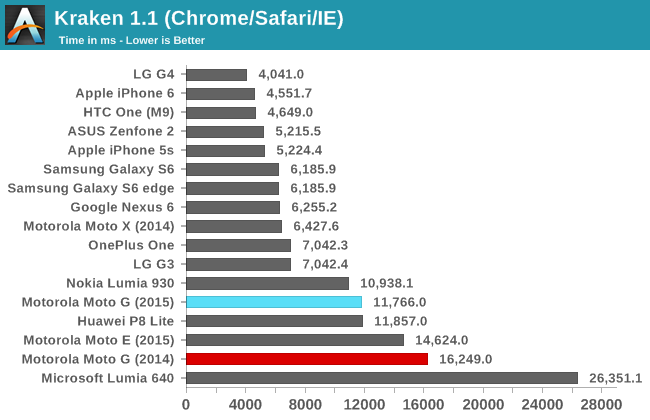 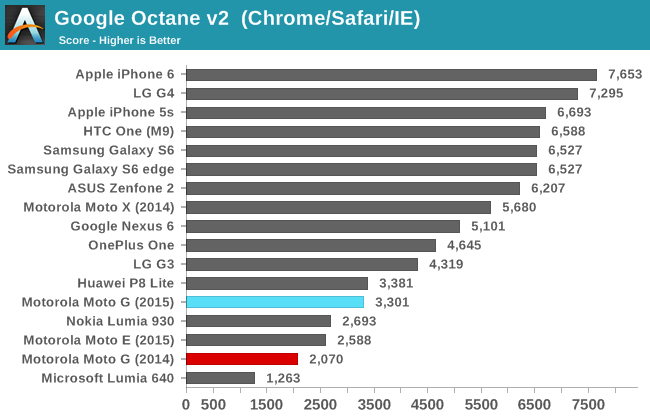 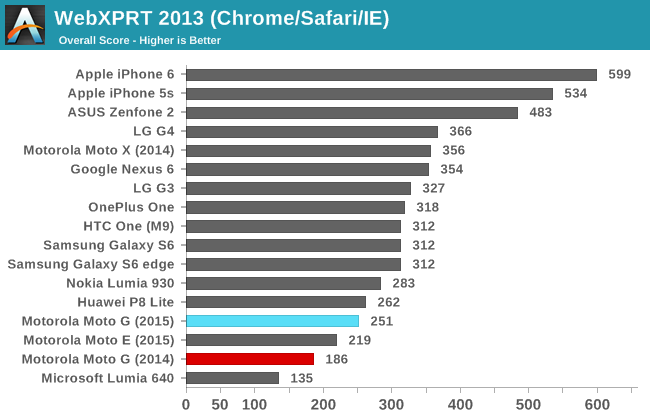 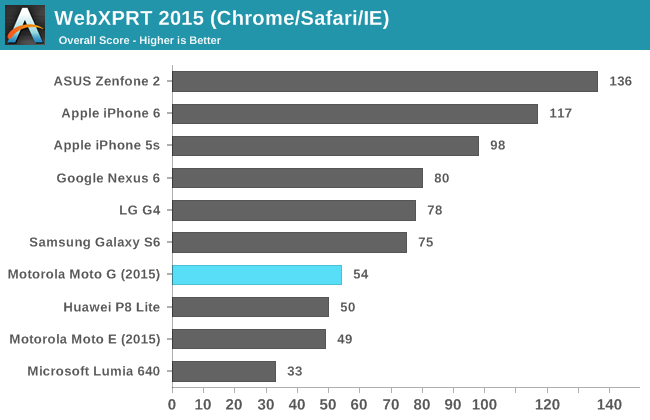 The overall picture painted by our web browser tests is that the 2015 Moto G has a healthy lead over the Moto E's performance, and an even greater one over the older Snapdragon 400 based models of the Moto G. The level of performance is certainly good for a $219 device, but I do find myself wishing that Snapdragon 410 and 615 were produced on 28nm HPC or 28nm HPm in order to achieve even greater performance without an increase to power consumption. 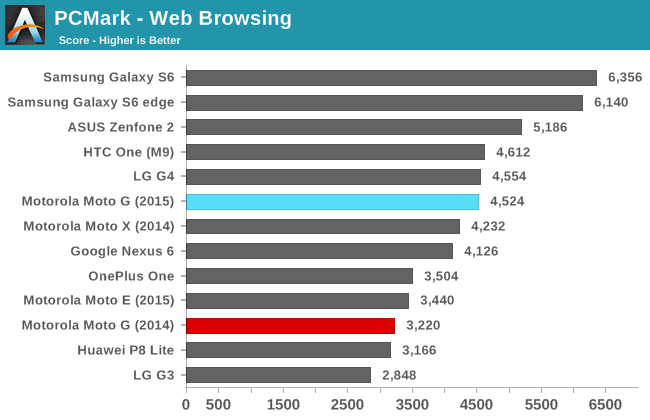 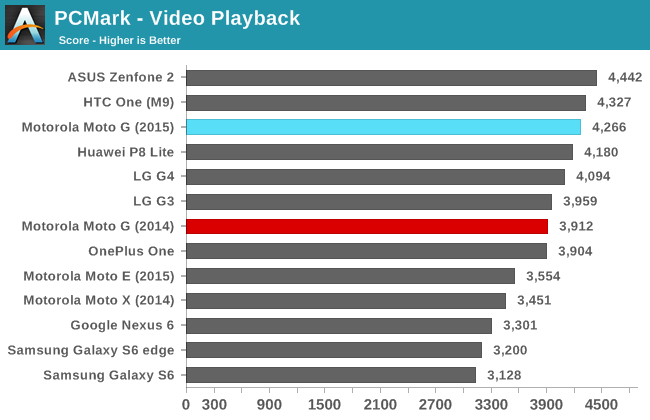 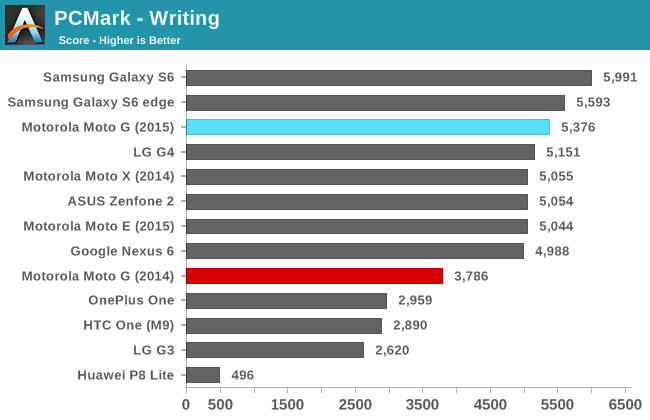 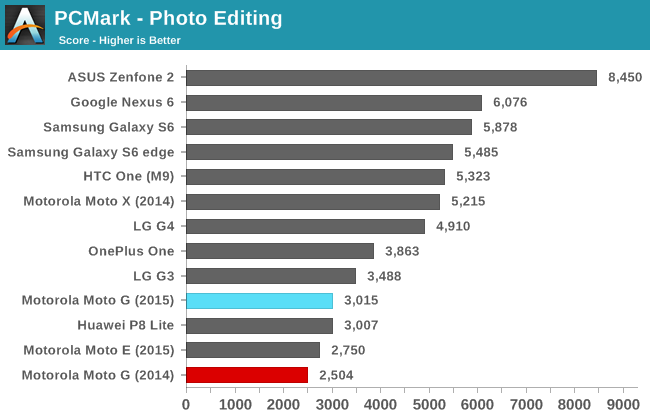 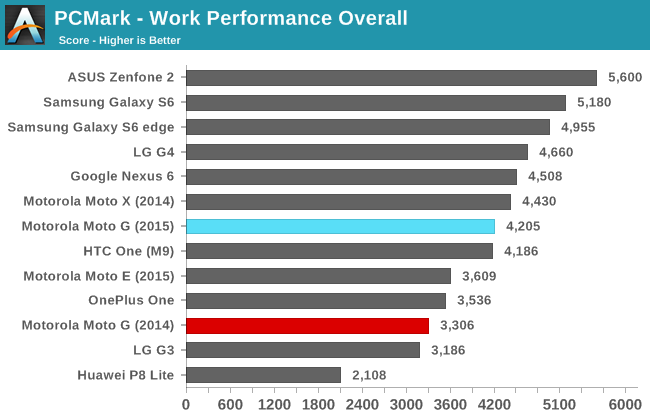 In PCMark, which focuses heavily on replicating real world tasks like watching video and editing photos, the 2015 Moto G again has a strong showing. Overall performance actually sits about the HTC One M9, carried by high scores in the writing and video playback tests. Web browsing performance also improves significantly from the 2015 Moto E and the 2014 Moto G, which could either be the result of additional memory or further optimizations to the Android WebView. 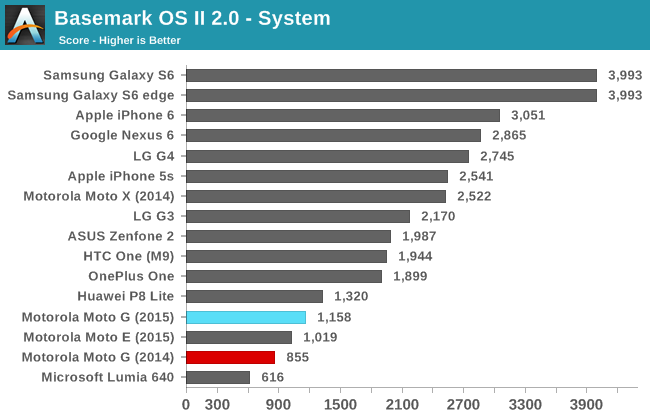 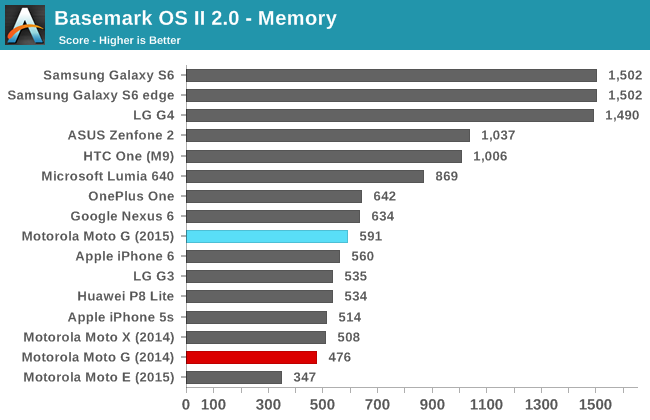 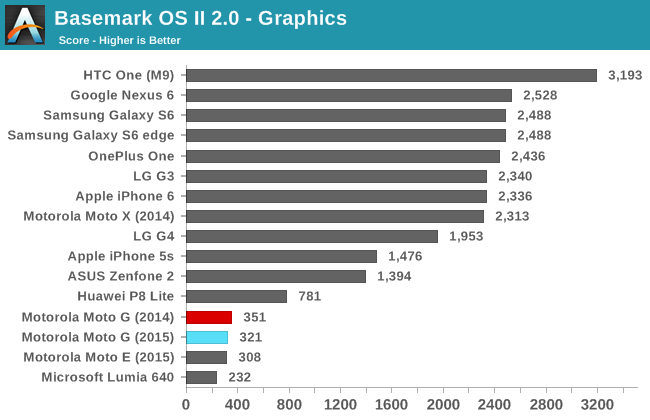 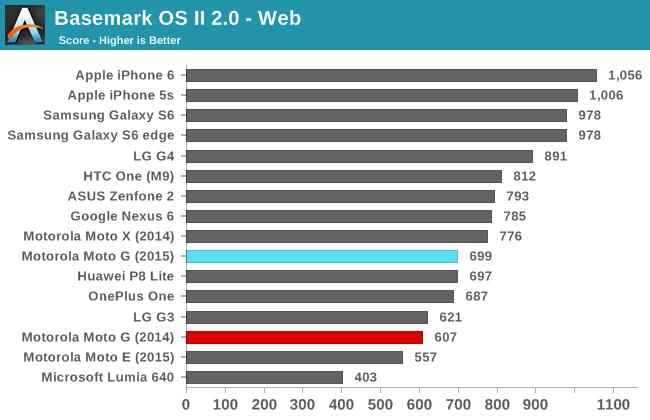 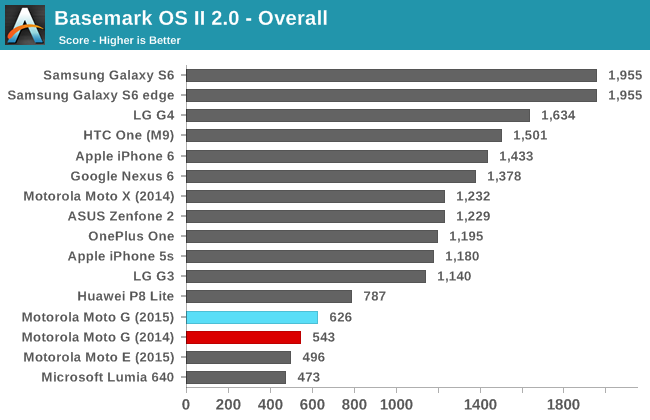 The Moto G doesn't perform as well in BaseMark OS II as it does in PCMark. While there's still good performance in the web and NAND memory sub-tests, performance lags in the system sub-test which stresses CPU and memory, and the graphics test score is very low due to how slow the Adreno 306 GPU is.

The Moto G's general performance is pretty good for a device of this price. There's a good level of improvement over the Moto E's performance, with the gap between the new Moto G and the 2014 model being even larger. The ASUS Zenfone 2 still has the best performance of a $200 smartphone, but it's something of an anomaly, and barring it the Moto G provides the best general performance that you'll see at this price point.