One of the key battlegrounds of the next decade is going to be storage: density, speed, and demand. Naturally all the major players in the space want to promote their own technologies of that of their competitors, and Kioxia (formerly Toshiba Memory) is no different. This year during their plenary talk at the International Electron Devices Meeting (IEDM) the company set forth its promotion of its BiCS flash product family, as well as its upcoming XL-Flash technology. What was interesting during this talk is a graph that seems to slam the long-term prospects of any of the upcoming Storage Class Memory (SCM) technologies like 3D XPoint from Intel and Micron. 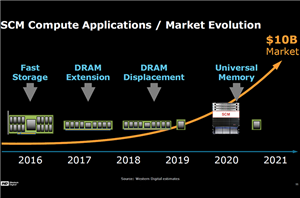 At the Flash Memory Summit this week, Western Digital announced that it intends to use 3D Resistive RAM (ReRAM) as storage class memory (SCM) for its future special-purpose ultra-fast...