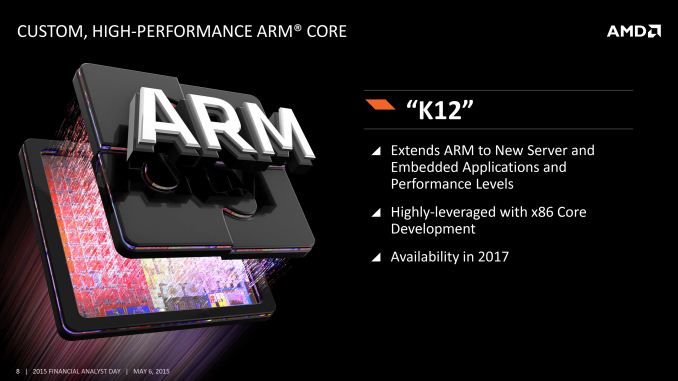 AMD’s “Seattle” SoC – the ARM Cortex-A57 powered Opteron A1100 – will finally be shipping in H2 of this year, after first sampling towards the end of last year. This unfortunately is almost a year behind AMD’s original schedule, though AMD seems moderately optimistic about catching up once they have their first ARM silicon out the door.

But the real focus of AMD’s comments on ARM for FAD involve K12, the AMD-developed ARM CPU core being designed alongside Zen. With AMD having opted to prioritize Zen development, K12 has been pushed back from 2016 to 2017, essentially taking the near-simultaneous launch of the two parts off the table. AMD for their part is attributing this change in schedule only to the decision to focus on Zen, however with Opteron A1100 delayed, it’s entirely possible this is also a knock-on effect that has pushed back the entire AMD ARM roadmap.

In any case, even with the delay AMD is still eagerly moving ahead with their ARM plans. A1100, even though it’s late, will be the pathfinder for AMD’s ARM efforts, serving as a platform to further develop the AMD ARM ecosystem, getting developers acquainted with the technology and getting software ready for it. K12 in turn will come in after that ecosystem has already seen some development, allowing AMD to get their new hardware out to the market and already have software support for it. I hesitate to say that this makes A1100 entirely a pathfinder product – until it’s available, it’s not clear how many customers might purchase it for production work – but clearly AMD’s big play is K12, not A1100.

And though K12 is delayed, AMD tells us that this hasn’t changed how it’s being developed, which is to say that it’s being done in concert with Zen. So virtually everything AMD gets right with Zen will be integrated into K12 as well, just on the basis of the ARM ISA instead of x86. AMD still believes that the time is right for ARM in the server space – along with a very obvious place in the semi-custom SoC space – and that K12 will be an interesting alternative to Zen in that regard.