The Rosewill Apollo RK-9100 is clearly the successor of the very popular Rosewill RK-9000 series. There are several versions of the RK-9100 available, varying by the type of the mechanical switch and the backlighting color. We received the RK-9100xR, the version with the Cherry MX Blue switches and red backlighting. 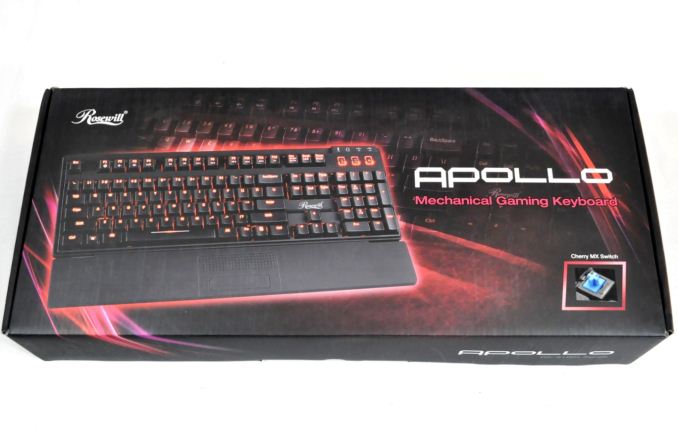 Aesthetically, the Apollo RK-9100xR looks almost like a standard old-school 104-key keyboard. Only the company logo and the design of the notification LEDs on the right side make a visual difference when the keyboard is powered down. This changes once the keyboard is connected to a system, bringing the backlighting on.

The backlighting is very well applied, illuminating the keycap characters without spilling out from the sides. There is only one slight exception, the spacebar key, where the LED light is focused at the center of the strip and unable to fill it with uniform light. Rosewill also provides two sets of four orange "gaming" keycaps, one for the arrow keys and one for the WASD keys. The orange keycaps are semi-transparent, allowing the LED to illuminate them entirely. 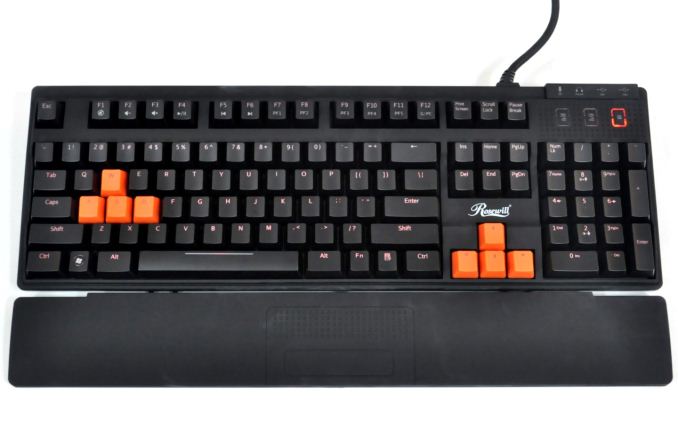 The chassis and the wrist rest of the RK-9100 are both made of corona-treated plastic, which gives a soft, rubber-like feeling to the touch and does not get dirty too easily. It is a relatively thin mechanical keyboard, as the chassis of most similar designs is nearly twice as thick. Two USB ports and audio jacks can be found conveniently placed at the top-right side of the keyboard. The two USB 2.0 ports are very close to each other however, and devices wider than a standard USB connector (e.g. certain flash drives) may be obstructed if either port is already populated. Furthermore, these two USB ports are not powerful enough to power devices such as external 2.5" mechanical disk drives.

As promised, the mechanical switches of the Apollo RK-9100 are Cherry MX Blue. The keys are firm, feeling very solid and consistent, even though Rosewill is using bar stabilizers instead of cross stabilizers beneath the longer keys. Under the hood, we found a very well assembled board, without soldering imperfections or mechanically weak links. A Freescale MC9S08JM16 microcontroller lies at the heart of the system, with a larger Genesys Logic GL850G USB 2.0 hub controller next to it. 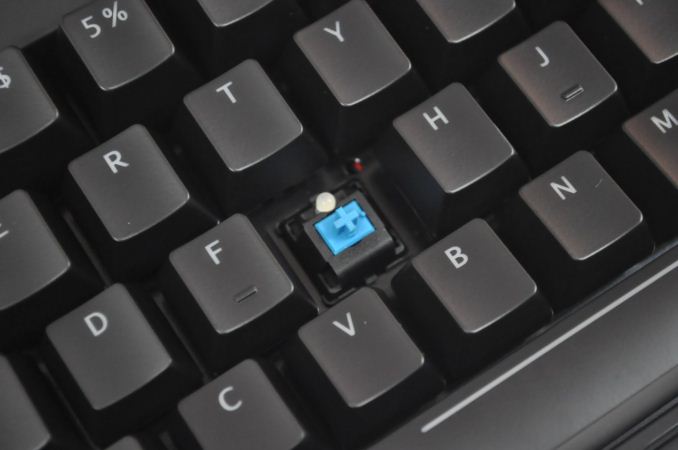 By holding down the FN key, the F-keys offer additional functions. F1 to F6 keys perform sound and media control functions, while F7 to F11 keys will switch between the five different programmed profiles. FN+F12 will enable or disable "Gaming mode", disabling the windows key and initiating the gaming profiles. Finally, the FN plus the up/down arrow keys controls the backlighting settings. 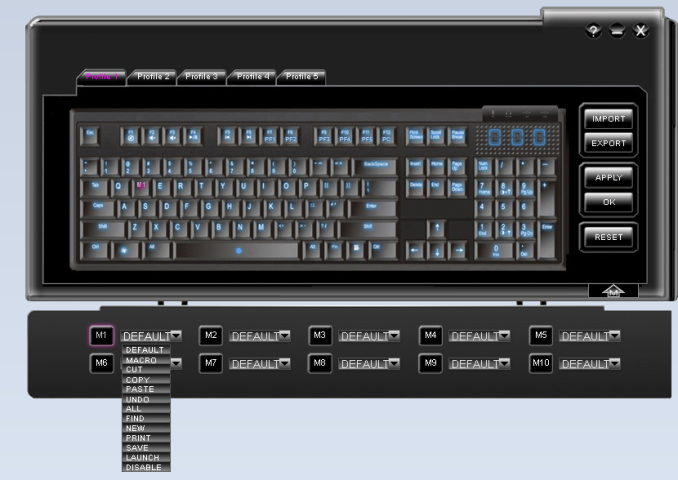 The greatest feature and the weakest link of the Apollo RK-9100 is that the keyboard is fully programmable. You can literally program any key to perform any action at all, from simple layout changes to actuating macros. You can program up to fifty macros (ten per profile), with each macro being capable of registering up to 27 keystrokes.

Limiting each profile to ten macros is a bit odd as well; while it's doubtful most users would actually need 50 macros on a single profile, there are certainly some that will want more than ten. As usual, there are software packages that provide a better macro experience if that's what you need, but the built-in macro support does travel with the keyboard.

While the provided macro programming software does work and has a simple interface, it really kills the potential of the keyboard. The interface looks as if it came from a 1980s Windows 3.11 machine and really needs an update. As this is one of the main new features of the RK-9100 over the previous generation RK-9000, if you don't need macro support you can save $20 or more by sticking with the tried-and-true RK-9000 series.