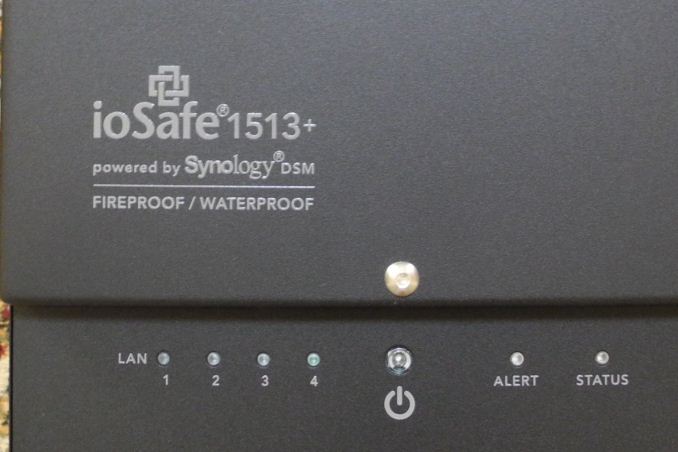 The emergence of the digital economy has brought to fore the importance of safeguarding electronic data. The 3-2-1 data backup strategy involves keeping three copies of all essential data, spread over at least two different devices with at least one of them being off-site or disaster-resistant in some way. It is almost impossible to keep copies of large frequently updated data sets current in an off-site data backup strategy. This is where companies like ioSafe come in with their lineup of fire- and waterproof storage devices. We have already reviewed the ioSafe SoloPRO (an external hard drive in a disaster-resistant housing) as well as the ioSafe N2 (a 2-bay Marvell-based NAS with similar disaster protection).

External hard drives are good enough for daily backups, but entirely unsuitable for large and frequently updated data. The latter scenario calls for a network attached storage unit which provides high availability over the local network. The SoloPRO's chassis and hard drive integration strategy made it impossible for end users to replace the hard disk while also retaining the disaster-resistance characteristics. A disaster-resistant RAID-1 NAS with hot-swap capability was needed and the ioSafe N2 / 214 was launched to address these issues. However, with growing data storage requirements amongst SMBs and enterprise users, ioSafe found a market need for disaster resistant NAS units that supported expansion capabilities in addition to large number of drive bays. The ioSafe 1513+ serves to fulfill those requirements.

ioSafe partnered with Synology for the N2 NAS (which was later rebranded as the ioSafe 214). The partnership continues for the ioSafe 1513+, a disaster-resistant version of the Synology 1513+. The main unit has five bays, but, up to two ioSafe N513X expansion chassis can be connected to make 15 bays available in total for the user. Obviously, the N513X chassis is also disaster-resistant. We got our initial look at the ioSafe 1513+ at CES earlier this year. As a recap, the specifications of the unit are provided in the table below.

The ioSafe 1513+ review unit came in a 70 lb. package. Apart from the main unit (which has the PSU in-built), we had an Allen key and a magnetic holder for the same, a U.S power cord and a single 6 ft. network cable.

Interesting aspects to note are the hot-swappable fans, the rubber gasket around the waterproofing door for the drive chamber and the faceplate on the underside that allows for addition of a SO-DIMM module to augment the DRAM in the unit. The drive caddies also have holes for mounting 2.5" drives, a minor complaint that we had in the ioSafe N2 review. The fanless motherboard is mounted at the base of the unit in a separate compartment under the fire-/waterproof chamber for the drives.

The ioSafe 1513+ can take up to five drives. Users can opt for either JBOD, RAID 0, RAID 1, RAID 5, RAID 6 or RAID 10 configurations. We benchmarked the unit in RAID 5 with five Western Digital WD4000FYYZ RE drives as the test disks. Even though our review unit came with five Toshiba MG03ACA200 2 TB enterprise drives, we opted to benchmark with the WD Re drives to keep the numbers consistent when comparing against NAS units that have been evaluated before. The four ports of the ioSafe 1513+ were link aggregated in 802.3ad LACP to create a 4 Gbps link. The jumbo frames setting, however, was left at the default 1500 bytes. Our testbed configuration is outlined below.

We thank the following companies for helping us out with our NAS testbed: