One of beautiful qualities of a 2.1 speaker system is the simplicity. Three main components are all that need to be setup in order to have a complete sound system up and working. The ProMedia 2.1 system holds true to these roots, as its setup is quick and painless, leaving plenty of time to let the speakers do their job making noise instead of frustration.

Out of the box come the subwoofer/amplifier enclosure, two satellite speakers, and the cabling necessary to interface them to the computer. One of the satellites contains a control pod, which is prewired with one cable for connection to the computer and another that goes to the subwoofer unit. Also included in the packing are the multilingual users manual and a package of rubber isolation feet.

The first step in setup is placing the satellites. The two speakers are identical, though one of the units has the control pod attached. As the speakers are interchangeable, the pod can be placed on either the left or right side to meet the user's preference. The attached desk stands on the satellites have a slight angle that helps elevate the soundfield up above the desktop to where most listeners sit.

For positioning, the standard 2.1 format is followed. Create an isosceles (two equal sides) triangle whose corners consist of the two speakers and then listener in the center. For most computer users, this results in the speakers being to each side of the monitor. The ProMedia satellites use the MicroTractrix horns with a 40 x 90 dispersion pattern. From listening to the system, it sound like the 90 is aligned with the vertical axis, as the treble drops off quickly when moving to the side of the soundfield, but less so with height.

The subwoofer unit consists of a squat cube that tucks away beneath the desk. It is a side-firing unit, with the woofer pointing to the right; the box is then ported to the front. Placing the unit under a desk will help increase the bass energy at the listening position, as the square corners create a bass trap and will help redirect the omnidirectional low frequencies the unit reproduces. Some experimentation with placement will affect the overall bass level; between location and the subwoofer volume adjustment, an appropriate amount of bass can be dialed in. 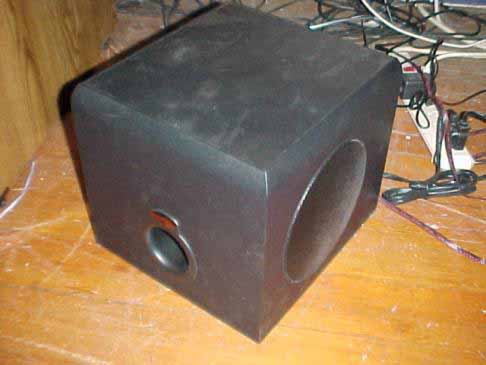 Make sure there is some air movement around the sub. This includes air movement to the side firing driver and the front port, as well as ventilation around the back panel of the sub. . In order to make the noise, it needs to move air, not to mention that the enclosure also contains a 200W amplifier. It may not be as delicate as a CPU, but the electronics in the amp still need to breathe. Even under normal operating conditions, the unit will run a little warm, as indicated in the users manual.

The cabling connections are the next step in assembly of the system. The control pod is prewired with two cables-the audio input and a DIN cable that connects to the subwoofer. The audio cable connects to a standard soundcard interface, the 3.5mm (1/8") stereo minijack. It is designed to interface to a line level output, and on four channel soundcards should be connected to the front stereo output. The DIN cable then runs down to the subwoofer to be amplified and sent to the speakers.