Where I think Rosewill has made major progress from the Thor v2, and to a lesser extent the Blackhawk Ultra, is in the aesthetics of the Throne. The Thor v2 is an incredibly powerful case with a fairly goofy look to it; the worst I can say about the Throne is that it reminds me of the Shredder from Teenage Mutant Ninja Turtles.

The front of the Throne is actually pretty slick in my opinion. While Rosewill cuts costs using a plastic fascia for the front and top panels, it doesn't look terrible. There are two large vents that allow the front intake fans to breathe, and then a door hides the reset button, the toggle for the red LED lights in the two front fans, and the three 5.25" drive bays. The door opens to the right by default but can actually be removed and rotated, a welcome addition.

Get to the top of the case and you see the Throne's bread and butter: a flat tray indented into the panel holds the six generously spaced USB ports (two 3.0 and four 2.0) along with the hotswap drive bay, audio jacks, power button, and sliding fan controllers. There's also a sliding vent mechanism similar to what we saw on the Thor v2.

The right side panel is solid steel while the left side panel includes plenty of ventilation and a beefy 230mm intake fan, which blows pretty much directly over the expansion slots. Note that this fan is thick; the power leads for the video cards I installed cleared it, but only just. If you're using an unusually tall enthusiast card (think EVGA Classified or ASUS Mars) you may very well run into problems with the intake. 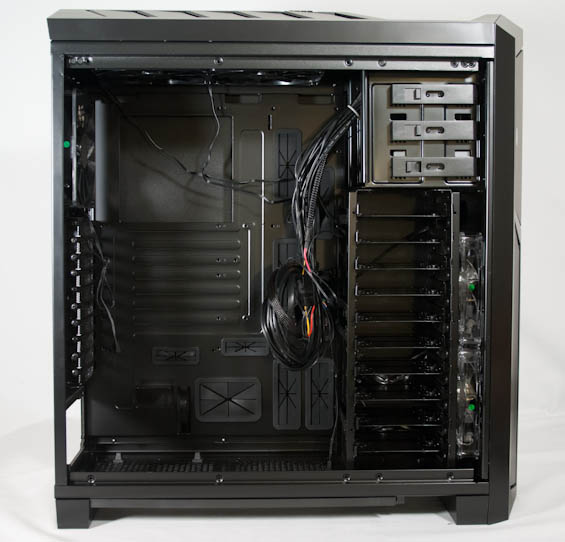 Removing the side panels is easy; they're both held into place by two thumbscrews, and they're hinged. When you get inside the Throne, everything is pretty business as usual. This is an extremely standard ATX enclosure design. With no swappable drive cages, the ten drive trays will undoubtedly feel at least a little excessive, but the Throne is designed to hold just about everything. I think it's interesting how much 5.25" drive bays have been deprecated; there are only three, all with toolless clamps. Meanwhile, space behind the motherboard tray isn't copious but it's acceptable, and the hinged side panels ensure it never becomes a serious issue.

What I appreciate about the Rosewill Throne is its clarity of purpose. The cooling design isn't especially elegant but I don't get the feeling it was ever intended to be; this is a design that's about getting as much air into and through the case as humanly possible. Similar to the Thor v2 and Blackhawk Ultra, we're again dealing with a brute force approach to cooling. I'm still not entirely sold on the fit and finish and build quality, but you don't buy Rosewill cases for aluminum front panels, you buy them because you need a lot of cooling power at a good price.