This CES, Corsair opted not to have a standard booth or suite. Instead they held a press event prior to CES proper, and unfortunately I wasn't able to attend. That disappointment is ameliorated somewhat by the fact that what was announced was the very definition of the word "flagship."

After starting with the Obsidian 800D enclosure and then gradually trickling down their designs to the eventual (and unfortunately underwhelming) Carbide 200R budget case, Corsair's gone back to the top and produced a new king of the castle in the Obsidian 900D. The 800D was an enthusiast chassis in its own right, but the 900D is another beast entirely, holding court with the likes of giants like the Azza Fusion, Thermaltake Level 10 GT, and perhaps most directly, the Cooler Master Cosmos II. 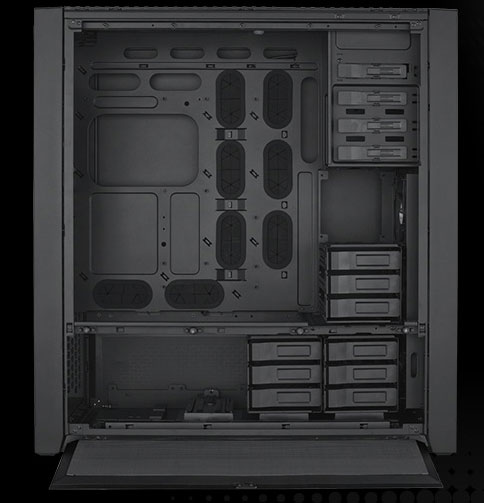 Even Corsair's own site admits the 900D is overkill, but that's really what the top dog on the product stack should be. The 900D features nine 2.5"/3.5" drive bays, three of which are hotswap, along with four 5.25" drive bays, and support for up to two power supplies and a staggering fifteen fan mounts. Basically, it's real big. We're hoping to have a review unit on hand before the end of February.

The 900D was the biggest announcement, but Corsair has also updated their gaming peripheral lines with a new keyboard and two new mice. The Vengeance K90 keyboard has been my weapon of choice for a long time; despite the spare use of rubber dome switches in an otherwise mechanical keyboard, the Cherry MX Red switches are fantastic, the wrist rest comfortable, and the keyboard's design is sexy enough to make Vivek blush.

From the looks of things, the K95 steps the K90's game up. Corsair continues to exclude a shroud in favor of letting the keys hover over the backplate, giving the keyboard a unique look and allowing it to be kept clean easily. The K95 also benefits from Cherry MX Red switches under every key, and has per-key configurable backlighting. Along with the K95, Corsair has updated the M60 and M90 mice to M65 and M95, but these refreshes are slightly less exciting, primarily updating the 5700dpi sensors to 8200dpi sensors with virtually no changes to the designs.

Finally, we have the Voyager Air and Flash Voyager GT Turbo. Corsair claims the Flash Voyager GT Turbo is the fastest USB 3.0 thumb drive on the planet, available at 32GB for $49, 64GB for $89, and 128GB for $179. The Voyager Air is a little more exciting (and a lot more flexible); this portable hard drive can be connected to via USB 3.0, Wi-Fi, or Gigabit Ethernet, essentially able to be used as a NAS and source for streaming video to all major platforms. It will come in capacities of 500GB for $199 and 1TB for $229.