Physically, the build quality of the Origin Chronos is more or less unimpeachable. The component choices are excellent across the board; I'm not personally a fan of SandForce-based SSDs due to their potentially inconsistent performance (coupled with the odd firmware issues the SF-2200 series dealt with early on), so I was happy to see the more universally respected Samsung 830 SSD make an appearance in this build. Likewise, it was nice to see Corsair's affordable, performable Vengeance DDR3 kit. Any physical issues with the Chronos are basically the result of issues with the components themselves; all of my reservations about the BitFenix Prodigy apply.

One of the selling points Origin wanted to emphasize with the Chronos was their partnership with LucidLogix and resulting support for Virtu MVP. We've talked briefly about Virtu MVP in the past and I even had the privilege of taking a conference call with LucidLogix's CEO, Offir Remez, separate from this review. The scope of Virtu MVP goes a bit beyond the Origin Chronos, though, and it's a value add that much of the competition offers given how widely licensed Virtu MVP is.

The main issue I have with our review unit is the 4.6GHz overclock on the Intel Core i5-3570K. Origin is pushing 1.4V through the chip under load and while in regular use (PCMark, game testing) the CPU never heats up too much, Prime95 sends the temperatures skyrocketing into the low 90s after just fifteen minutes. Worse, 1.4V is well beyond what conventional wisdom suggests is acceptable for Ivy Bridge. Origin argues that the typical user won't tax the CPU enough for this to result in reliability and longevity issues; their validation process through Intel states that at these settings and spending 70% of its lifetime under sustained load, the i5-3570K will last two and a half years.

I remain pretty skeptical. In my experience, the heat and power consumption generated by Prime95's Small FFT test isn't as unrealistic as people often think. Adobe Media Encoder can actually produce roughly the same heat and power consumption as Prime95, and unlike Prime95, that's a real world application that may see use by the end consumer. What's also important to keep in mind is that the thermals produced under these circumstances (~93C under Prime95) are occurring in a best case scenario: an air conditioned apartment at ~23C, with the system sitting in the middle of the floor and no dust buildup in the radiator or fans. Ivy Bridge may be specced to peak at 105C before throttling so there's some headroom left, but I can see that headroom evaporating in a hurry without careful maintenance. The performance of the overclock is stellar, but I have concerns about long term stability and longevity; Origin's warranty lasts a year, and by Intel's own standard the chip's useful lifetime at these settings doesn't extend as far beyond that as I'd like. 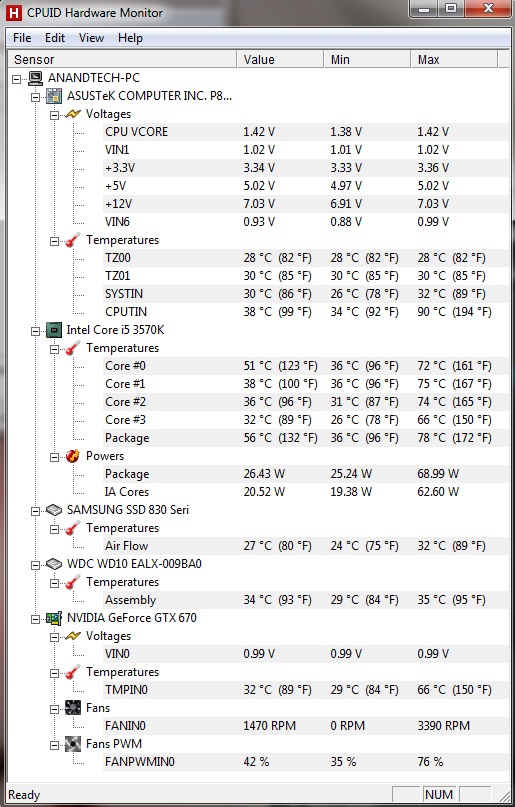 Intel and NVIDIA both seem to have hit it out of the park with their current lines. Power consumption on these parts remains respectable even under load, and the Origin Chronos benefits from it. 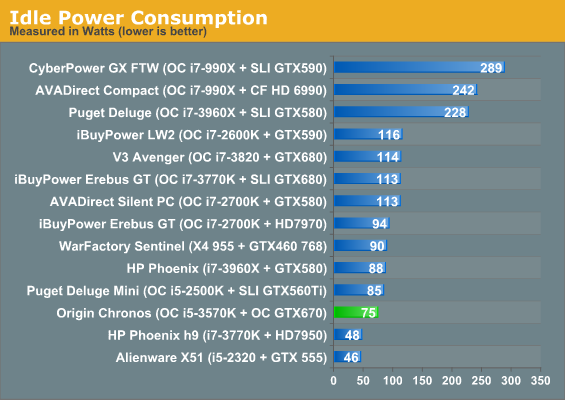 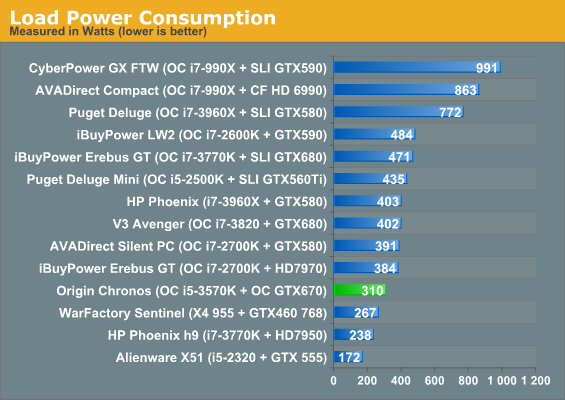 The idle and load current is among the lowest we've seen. Origin's engineers are either very smart or they're reading my reviews (or both?), because despite the high voltage they're at least using an offset instead of a manual voltage setting, resulting in excellent idle power. These are numbers you can actually expect to get out of an end user build, and they're fantastic. It's just tremendously efficient in terms of the amount of power drawn against the performance you get, making it a great citizen both at home or at a LAN.