The massive 416 mm² large chip contains no less than 2263 million transistors. Each generation of Intel and AMD server CPUs seem to get a bit larger as you can see below. 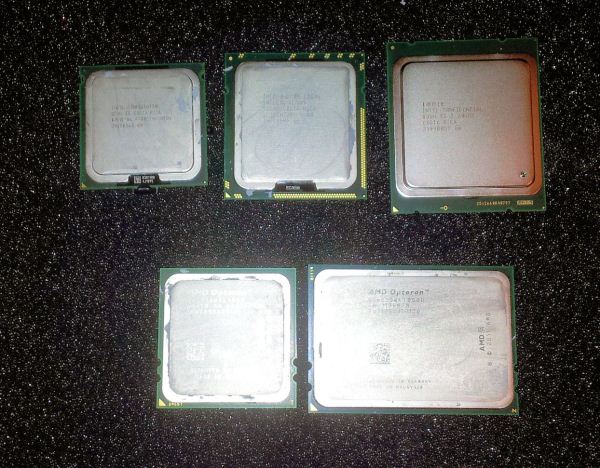 So how does the new Xeon compare to the older Xeons and the latest Opterons? Let's take a look at the paper specs:

The new Xeon comes with a huge die, and with its ring interconnect and improved RAS, it starts to look more like a successor of the Westmere-EX than the Westmere-EP Xeon. In fact the ring of the Xeon E5 is more advanced: it has a PCIe agent, PCU and IMC on the same ring as the 8 cores.

The massive die, the two extra cores, the integration of the PCIe controller and no competition in the high-end have made it easier for Intel to justify a price increase. The Sandy Bridge EP is somewhat more expensive than its predecessor, as you can see in the table below. The first clockspeed mentioned is the regular clock, the second the turbo clock with all cores active (most realistic one) and the last the maximum turbo clock.

The Xeon E5-2690's somewhat out of the ordinary TDP (135W) is easy to explain. With a very small TDP increase (+5W) Intel's engineers noticed they could raise the clock of the best SKU with another 200 MHz from 2.7 GHz (130W) to 2.9 GHz. The E5-2690 was more or less a safeguard in the event that the Interlagos Opteron turned out to be a real "Bulldozer". As the Opteron could not meet these expectations, the high performance of the 135W chip allows Intel to ask more than $2000 for its best Xeon EP. Which is quite a bit more than what the best Xeon EP used to sell for so far ($1500-1600).

Since the new Xeon has two extra cores and integrates the I/O hub (IOH), it is understandable that the TDP values are a bit higher compared to the older Xeon.

How does these new Xeon SKUs compare to the Opteron? See below.

Let's start with the midrange first, as the competition is the fiercest there and these SKUs are among the most popular on the market. Based on the paper specs, AMD's 6276, 6274 and Intel's 2640 and 2630 are in a neck-and-neck race. AMD offers 16 smaller integer clusters, while Intel offers 6 or 8 heavy, slightly higher clocked cores with SMT. And while we did not receive a Xeon E5-2630 for benchmarking purposes, we were able to quickly simulate one by disabling the 2 cores of our Xeon 2660, which gave us a six-core processor at 2.2 GHz with 20 MB L3-cache. This pseudo-2660 should perform very similar to the real Xeon 2630, which is clocked 4.5% higher, but has 5 MB less L3-cache.

Meanwhile in the high performance segment we'll be comparing our six-core 2660 with the Opteron 6276. The CPUs in this comparison aren't going to be in the same price bracket, but as the AMD platform is typically a bit cheaper the 2660 and the Opteron 6276 end up having similar total platform costs. Otherwise for a more straightforward comparison based solely on CPU prices the 2660's closest competitor would be the Opteron 6274. We don't have one of those on hand, but you can get a pretty good idea of how that would compare by knocking 4% off of the performance of the 6276..

Finally, for the "Power Optimized" market there seems to be little contest over who is going to win there. Intel's chip is a bit more expensive, but it offers a much lower TDP, just as many threads, and a higher clockspeed. Considering that the Intel chip also integrates the PCIe controller, it looks like Intel will have no trouble winning this battle by a landslide. Fortunately for AMD, this review is mostly about the more popular midrange market.