A NenaMark 2 benchmark score for an unknown device based on Qualcomm’s upcoming 28nm Snapdragon S4 “Krait” MSM8960 SoC has just surfaced. The device seems to have 1.5Ghz CPU, a 1024x600 resolution display powered by an Adreno 225 GPU and running Android 4.0.3. 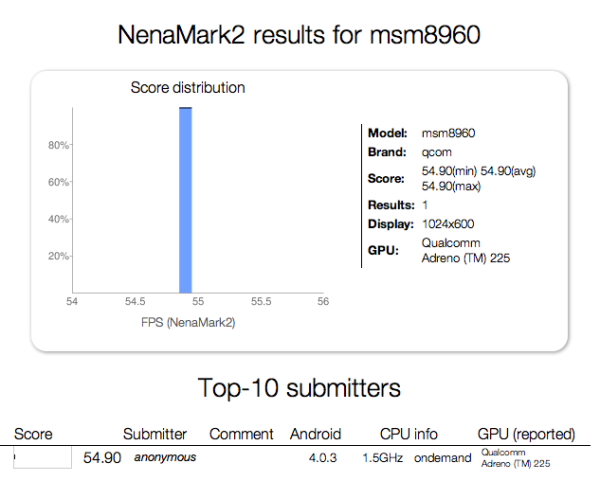 The Adreno 225 GPU scores 54.9 fps in the benchmark. To put things in perspective, a Galaxy S2, powered by the Mali-400 MP4 scores 46.2 fps. The important difference here is that the Galaxy S2 has an 800x480 resolution display, which makes the Adreno 225’s performance that much more impressive while powering a higher resolution display.

What remains to be seen is how the Adreno 225 stacks up against the current king-of-the-hill, the PowerVR SGX543MP2, the custom GeForce GPU in Tegra 3 and other upcoming GPUs such as the Mali T-604 and whatever Apple comes up with in its A6 chip. Given the raw performance offered by these next-gen GPUs, it won’t be long before we get console-quality gaming on our handheld devices.