The display hasn't changed since earlier this year, although this is the first 15-inch 2011 MacBook Pro that I've tested with the standard resolution (1440 x 900), glossy panel. Aesthetically I prefer this panel (I'm the rare case that isn't bothered by gloss) and the lower resolution is easier on my eyes, but for productivity I do feel the 1680 x 1050 upgrade is worth it. If this is going to be a workhorse, and you have good eyesight, get the high-res version. 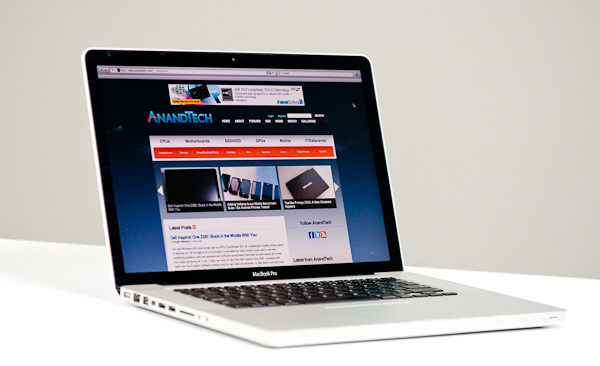 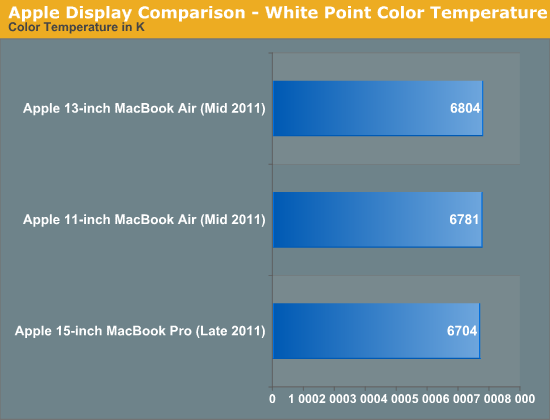 Apple wants to deliver as consistent of an experience as possible across its product line. While the Air models still don't have quite as high quality a panel as the Pro, at least there aren't any wide variations in what constitutes white on these panels. 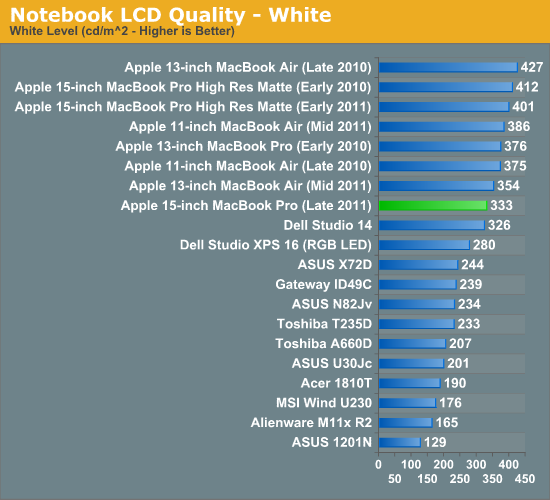 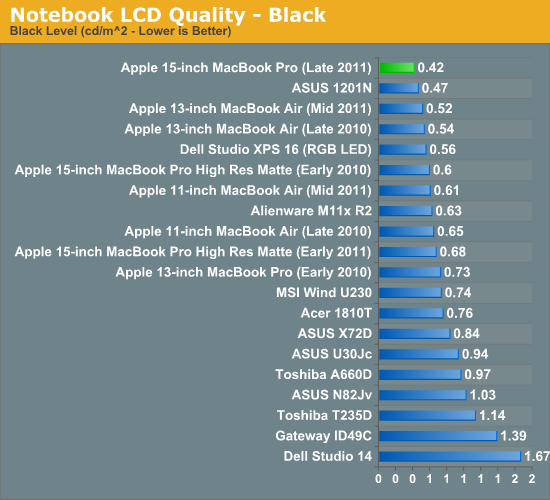 Brightness is down a bit compared to the high-res panel we looked at earlier this year, but so are black levels. The combination of the two actually results in a slightly higher contrast ratio than what we measured on the early 2011 models. In practice the panel looks just as good and seems to get just as blindingly bright as my personal 15-inch. 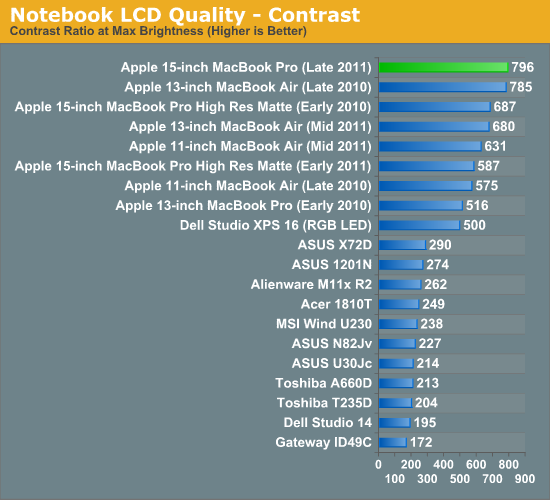 Color quality and gamut are virtually identical as well, no surprises here: 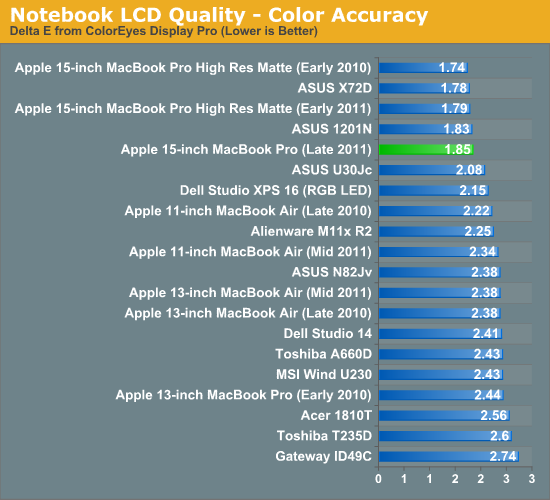 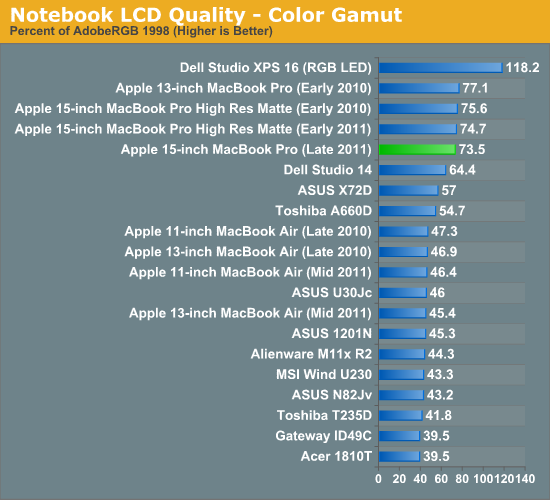 The more traditional Macs (MBP, Mac Pro, iMac) continue to ship with mechanical hard drives by default, the late 2011 update is no different. My review sample came with a 5400RPM Toshiba MK5064GSXF. The drive features two 320GB platters (obviously not all in use for the 500GB capacity), and an 8MB cache.

All of my personal systems use SSDs and in testing the new MBP with a hard drive I can only say that the move back is more painful than ever. It's most noticeable when multitasking. Installing applications while browsing the web and copying files just seems to slow to a crawl compared to my SSD equipped MacBook Pro. If you're going to buy any new machine, especially if you're paying top dollar for something you expect to feel fast, you definitely need an SSD. 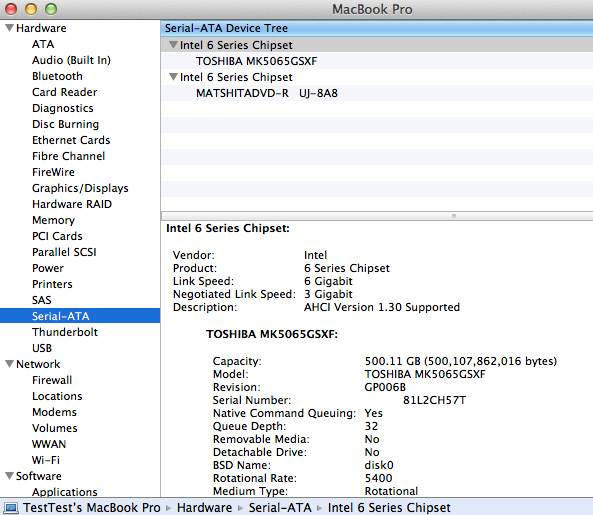 The good news is Apple's SSD pricing isn't horribly unreasonable, at least at the beginning. For $200 you can upgrade the 15-inch MacBook Pro to a 128GB drive (most likely a 3Gbps Samsung based SSD). It's when you look at the 256GB or larger drives that you're probably better off buying your own. You can buy a 256GB Crucial m4 for under $400 today, and a 240GB Vertex 3 will set you back around $460. Both options are cheaper (and faster) than Apple's $600 256GB upgrade. If you get the high-end 15-inch MBP model however, the upgrade prices drop by $100 - making the Apple route much more cost competitive. You don't get the same performance you would from an aftermarket drive, but with less headaches and potential for issues it's possibly a better route.

What aftermarket SSD should you buy? If you want to play it safe and hang on to TRIM support, go with Apple. Ever since I've been reviewed SSDs however I've run aftermarket SSDs in my Macs, mostly without any major issues. I can vouch for the Intel SSD 510, Samsung SSD 830 and OCZ Vertex 3. At one point or another I've used all of them in my 2011 MacBook Pro. My current setup is a Samsung 830 in the primary drive bay and an Intel SSD 510 in place of my optical drive, the combination works wonderfully.

Apple continues to quietly focus on delivering excellent WiFi performance with the MacBook Pro. In the late 2011 models WiFi is still powered by Broadcom's BCM4331 3x3 solution. A quick test with a 3rd generation Time Capsule showed us peak transfer rates of 154Mbps, in line with what we've seen with the first generation Sandy Bridge MacBook Pro. 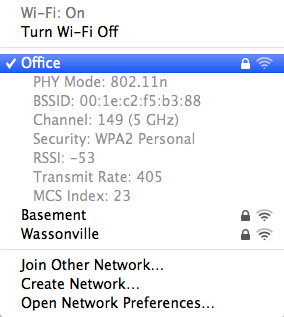 Despite Apple's move to Bluetooth 4.0 support on some of its other platforms, the MacBook Pro remains at 2.1 with the same BCM2070 controller. 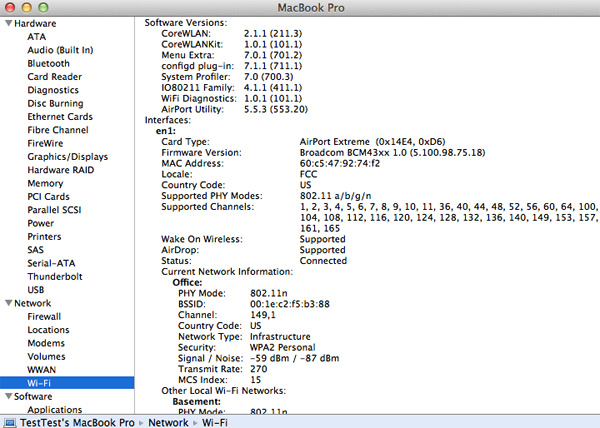