Unlike ELSA’s ERAZOR X board which uses regular (or SDR) SDRAM, the ERAZOR X2 isn’t based on ELSA’s own PCB design, instead it’s based on the DDR GeForce reference design provided by NVIDIA.  The reason for this seems to be that the release of their DDR product was rushed by the fact that Creative Labs and Guillemot had pushed for the release and sale of their DDR products before the end of last year.  In order to remain competitive ELSA didn’t worry about using their own design and simply produced a reference DDR GeForce with their name on it.

Unfortunately, for ELSA’s sake, this means that the ERAZOR X2 will have much difficulty separating itself from the rest of the DDR GeForce products out there, most of which happen to be based on NVIDIA’s reference design. 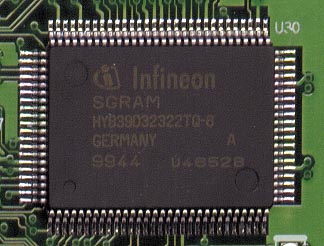 The card makes use of a total of eight 4MB DDR SGRAM chips manufactured by Infineon.  The 6ns Infineon chips should be capable, theoretically, of operating at 166MHz which, because of them being DDR chips, would result in a transfer rate equal to that of 333MHz chips.  In spite of this the memory clock is still rated at a moderate 150MHz most likely as a safe guard in case Infineon becomes incapable of delivering faster chips in the future.

Currently Infineon is the only manufacturer that produces DDR SGRAM for DDR GeForce boards however as Samsung and others ramp up production on their DDR SDRAM and DDR SGRAM parts we will see the variety in DDR chips used on GeForce boards increase.  For now, you can almost be 100% certain that your ERAZOR X2 will be used with 6ns Infineon DDR SGRAM which opens up a few overclocking options to push the 150MHz default setting even higher.

The heatsink/fan combo on the ERAZOR X2 is the same combo we’ve seen on all of the reference cards from NVIDIA, which is explained by the fact that the X2 is just a reference design DDR board.  The heatsink is mounted directly onto the GeForce chip without the use of any thermal compound.  This is a mistake that most manufacturers make simply because, on an assembly line, it’s difficult to apply the right amount of thermal compound to a part and for most users, where overclocking isn’t a major concern, there is no need for the added thermal compound to improve thermal conductivity and thus allow the heatsink to dissipate more heat.  The only manufacturer that took the time to apply thermal compound to the chips on their cards was the late Hercules, manufacturer of the Dynamite TNT2 and TNT2 Ultra, two of the highest clocked TNT2 cards on the market.

The board features an S-Video output port that is driven by the Brooktree 869KRF chip that we’re already quite familiar with.  The Brooktree chip was present on most TNT2 boards and supports the following resolutions: 640 x 480, 800 x 600, and 1024 x 768.  As we discovered in our roundup of four of the top TV-Output solutions, the 869 chip performed best at displaying vivid images on a TV screen in a bright and colorful manner, which makes it perfect for a gaming card.  Unfortunately the chip’s text output is considerably blurrier than the output from Matrox’s Graphics’ TVO which is present on the Millennium G400 series of cards.  The latter shouldn’t be that big of an issue since this is a gamer’s card, but just be warned of it if you plan on doing extensive word processing using the TV out function on the ERAZOR X2.

The 2D output of the ERAZOR X2 is driven by the 350MHz RAMDAC integrated into the GeForce chip itself.

As the analog signal is outputted from the frame buffer to the VGA output on the card for display on your monitor, the quality of the signal can be degraded as a result of poor quality filters present between the frame buffer and the VGA output connector.  The sacrifice for poor quality filters is normally made in order to lower the end costs of the video card itself.  This ends up causing blurred text at higher resolutions as well as a fuzzy display among other symptoms.  While the issues aren’t evident at lower resolutions (1280 x 1024 and below), they are very noticeable for users that run at above 1280 x 1024.

Luckily, with ELSA, these problems aren’t evident as the 2D output of the ERAZOR X2 was very crisp.  This helps reinforce ELSA’s philosophy of quality being job #1 and cost falling a close second.