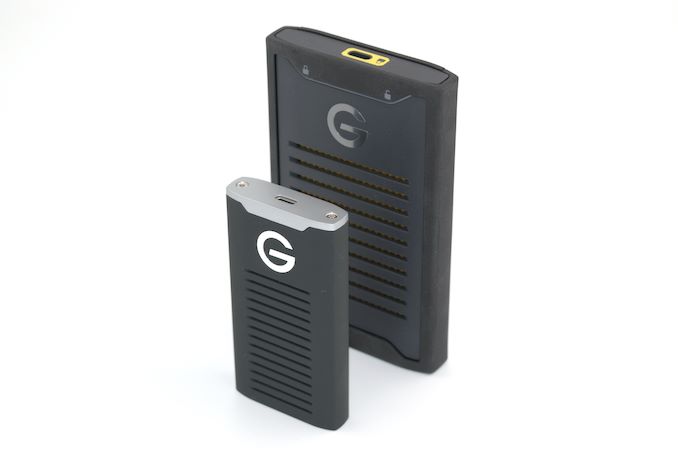 Western Digital introduced the SanDisk Professional branding in May 2021 for its products targeting the content-capture market. Originally sold under the G-Technology tag, these portable direct-attached storage (DAS) products and multi-HDD RAID enclosures had a strong foothold in multimedia production circles. The SanDisk Professional brand was introduced in a bid to expand upon the popularity of these while also adding new products targeting prosumers and production houses.

The G-DRIVE family represents the lineup of single-disk direct-attached storage units from G-Technology / SanDisk Professional. Today's review takes a look at the G-DRIVE SSD and G-DRIVE ArmorLock SSD - two bus-powered portable SSDs with a USB 3.2 Gen 2 interface that target very different use-cases. In the process of transitioning from G-Technology to SanDisk Professional, the G-DRIVE SSD has received a new updated thermal design with an aluminum core, slightly increased speeds, and password-enabled encryption. The G-DRIVE ArmorLock SSD is the same as the G-Technology model introduced last year, except for a significant reduction in price and additional capacity points.

Portable flash-based storage devices have grown in popularity, thanks to the advances in NAND technology as well as the rapid adoption of high-speed interfaces over the last decade. While Thunderbolt continues to be perched at the high end, USB 3.2 Gen 2 (with its 10Gbps data rate) has emerged as the de-facto standard for most USB ports in modern systems.

The G-DRIVE lineup of drives from SanDisk Professional consists of both hard disk drives (for capacity-conscious consumers) and flash-based SSDs (for applications where performance is more important). Within the SSD-based G-DRIVE family, the company has three products:

Today's review takes a look at the G-DRIVE SSD and the G-DRIVE ArmorLock SSD. Despite sporting the same USB 3.2 Gen 2 (10Gbps) upstream Type-C interface, they are meant for completely different use-cases. The ArmorLock SSD is meant to be an always-encrypted SSD with seamless unlocking via Bluetooth (using either an iOS or Android app, or a Mac OS app). It is targeted towards use-cases where data protection and security are important enough without the need for a FIPS-certified drive. On the other hand, the G-DRIVE SSD eschews the Bluetooth feature while retaining hardware encryption using the SanDisk Secure application. The unit is significantly lighter, and the form-factor is much more compact compared to the ArmorLock SSD. 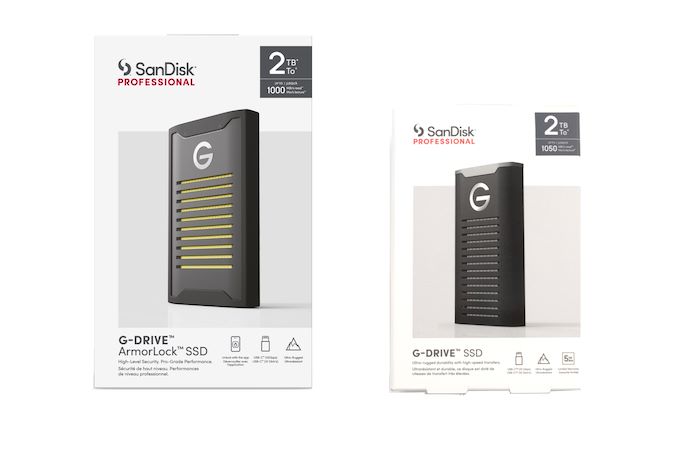 The table below presents a comparative view of the specifications of the two portable SSDs presented in this review.

Both units are designed to protect against dust and water ingression, and carry IP67 ratings. They are also rugged in nature, with a 3m drop resistance. Crush resistance ratings land at 1000 lbs for the ArmorLock SSD and 2000 lbs for the normal variant.

The G-DRIVE SSD is a plug-and-play drive, while the ArmorLock SSD needs to be associated with an app instance (on a mobile device or on a Mac), keys setup, and drive formatted before the volume is visible to the OS. A step-by-step illustration of this process from the app viewpoint is presented in the gallery below.

The Android app is intuitive to use, and fulfills the one-touch unlock promise made by Western Digital for the product. The minor drawback is the delay associated with the app creating a Bluetooth link with the SSD, but once that is done, the experience with the portable SSD is no different from any other external drive for the average consumer. For advanced users, however, the ArmorLock doesn't support S.M.A.R.T passthrough or TRIM (possibly due to security reasons, as of firmware version 1.6 build 122P). The G-DRIVE SSD has no issues with those features, as evident from the CrystalDiskInfo screenshot below.

Prior to looking at the benchmark numbers, power consumption, and thermal solution effectiveness, a description of the testbed setup and evaluation methodology is provided.

The most attractive aspect of the Quartz Canyon NUC is the presence of two PCIe slots (electrically, x16 and x4) for add-in cards. In the absence of a discrete GPU - for which there is no need in a DAS testbed - both slots are available. In fact, we also added a spare SanDisk Extreme PRO M.2 NVMe SSD to the CPU direct-attached M.2 22110 slot in the baseboard in order to avoid DMI bottlenecks when evaluating Thunderbolt 3 devices. This still allows for two add-in cards operating at x8 (x16 electrical) and x4 (x4 electrical). Since the Quartz Canyon NUC doesn't have a native USB 3.2 Gen 2x2 port, Silverstone's SST-ECU06 add-in card was installed in the x4 slot. All non-Thunderbolt devices are tested using the Type-C port enabled by the SST-ECU06.

The specifications of the testbed are summarized in the table below:

The testbed hardware is only one segment of the evaluation. Over the last few years, the typical direct-attached storage workloads for memory cards have also evolved. High bit-rate 4K videos at 60fps have become quite common, and 8K videos are starting to make an appearance. Game install sizes have also grown steadily even in portable game consoles, thanks to high resolution textures and artwork. Keeping these in mind, our evaluation scheme for portable SSDs and UFDs involves multiple workloads which are described in detail in the corresponding sections.

In the next section, we have an overview of the performance of the G-DRIVE SSD and ArmorLock SSD in these benchmarks. Prior to providing concluding remarks, we have some observations on the power consumption numbers and thermal solution also.