On the back of Intel's recent Ice Lake Xeon W-3300 announcement, ASRock has announced one of the first motherboards to support the new processors, the ASRock C621A WS. Some of its core features include four full-length PCIe 4.0 slots, three full-length PCIe 3.0 slots, two M.2 slots, eight memory slots with support for up to 2TB of DDR4 memory, and dual 10 Gb plus dual Gigabit Ethernet on the rear panel. 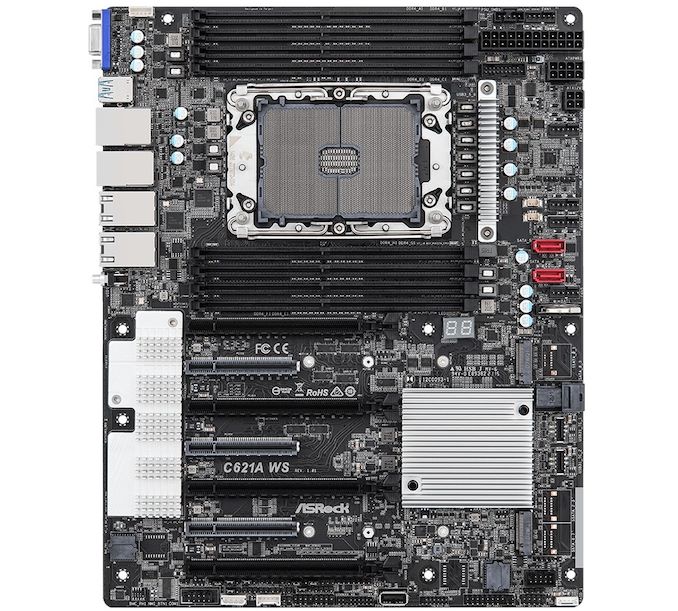 The ASRock C621A WS motherboard uses a transposed single LGA4189 socket and is flanked by eight horizontally mounted memory slots. There's support for up to DDR4 DIMMs at speeds up to 3200 MT/s, with a maximum capacity of up to 2 TB, with UDIMMs, RDIMMs, and LRDIMMs all supported. Dominating the lower section of the board are four full-length PCIe 4.0 x16 slots and three full-length PCIe 3.0 x8 slots, with one PCIe 3.0 x4/SATA M.2 slot and one PCIe 3.0 x1/SATA M.2 slot. For conventional SATA devices, ASRock includes two SATA ports with one mini-SAS HD connector.

As for network connectivity, ASRock includes a pair of 10 GbE that are powered by an Intel X710-ATX Ethernet controller, as well as another pair of Gigabit Ethernet ports driven by a pair of Intel I210 controllers. Other connectivity includes a D-sub video output which allows users to access the board's BMC functionality, which is provided via an ASPEED AST2500 controller, with a dedicated Ethernet port allowing for remote access to the BMC. In terms of USB, there are four USB 3.2 G1 Type-A ports on the rear panel, with further expansion available through internal headers. This includes room to installed up to four USB 3.2 G2 Type-C ports through front panel headers, one USB 3.2 G1 Type-A header for two ports, and one USB 2.0 header, which also can support another two ports.

Although the new Intel Xeon W-3300 family of processors includes native support for Thunderbolt 4 and Intel's Wi-Fi 6E CNVi, ASRock has opted not to use either of these features. Whether this is intentional from ASRock remains to be seen, as it may release more variants later. At the time of writing, ASRock hasn't given pricing information, but we expect the C621A WS to be available in retail channels soon.