Over the past six months we've looked at a varied selection of Z590 motherboards. While most of these have been in the mid-range to premium category, today we are taking a look at a more modest and cost-effective Z590 model. The Z590 Steel Legend WiFi 6E sits toward the lower end of ASRock's Z590 offerings. It combines a varied feature set that includes 2.5 gigabit Ethernet, Intel's latest Wi-Fi 6E CNVi, three M.2 slots, all while adopting a unique urban camouflaged PCB design. We give the Z590 Steel Legend our attention and see if budget Z590 has its limitations or if it's money well spent.

The Intel Z590 chipset has over 50 motherboards for users to select from, and while the process of elimination can be done by narrowing down the field on features, pricing, and aesthetics, there's still a lot to look at. One of the questions many users may be asking themselves is, does spending $600 on a motherboard make much difference from spending $200-250? The short answer in terms of default performance is not really, but the more expensive board will typically have more premium features to use. The more budget-friendly models often make certain sacrifices on all the extras.

One motherboard that is positioned towards the lower end of the Z590 pricing structure is the ASRock Z590 Steel Legend WiFi 6E ($200), with a standard Z590 Steel Legend model also available without Wi-Fi 6E for a slightly lower cost ($190). One interesting element to the Steel Legend, which is one of ASRock's latest motherboard ranges and only debuted in 2019, is the design. ASRock has opted for an urban camouflaged styled PCB, with a light theme throughout, including silver and grey heatsinks and elements of customizable RGB LEDs for users to create their own look. The question is if to get the look there has been a compromise in component quality. That's what this review wants to look at. 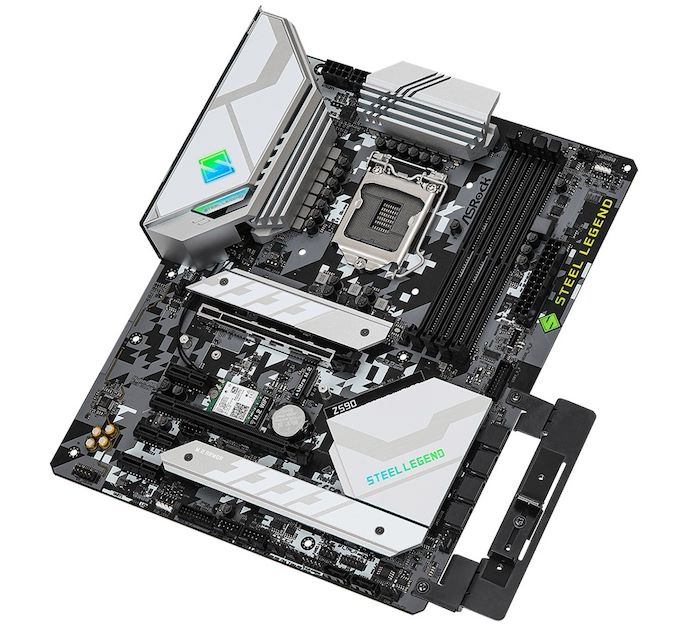 Some of the most prominent features of the Z590 Steel Legend Wi-Fi 6E are in the model name; it includes Intel's latest Wi-Fi 6E CNVi and premium Realtek 2.5 gigabit Ethernet. Other notable elements of the feature set include a budget-friendly but more than capable Realtek HD audio codec, and plenty of expansion support in the IO. There is room to use USB 3.2 G2x2 Type-C on this board, but users will need to use a front panel header, and ASRock includes two USB 3.2 G2 ports on the rear panel: one Type-C and one Type-A.

Looking at more of what the Steel Legend for Rocket Lake has in its locker, it has two full-length PCIe slots, one operating at PCIe 4.0 x16 and the other locked down to PCIe 3.0 x4 powered by the chipset. For users looking at additional networking or an upgraded PCIe sound card, ASRock provides three PCIe 3.0 x1 slots. There's room for three M.2 drives for storage, with one offering support for the fastest PCIe 4.0 x4 NVMe based drives, while the other two take lanes from the chipset and feature support for PCIe 3.0 x4 and SATA drives. This is typically the dynamic on Z590 models, with cheaper Z590 ATX sized boards sacrificing a PCIe 4.0 slot to save on cost.

Digesting the performance levels with the ASRock Z590 Steel Legend WiFi 6E when combined with our Intel Core i9-11900K processor, it performed respectably in our gaming tests. However, it did lag behind other Z590 models in some of our heavier computational tests. In our system testing, it did take the longest to POST into Windows from all the Z590 models we've tested so far, but in our power consumption testing, it showed itself to be one of the more power-efficient models. 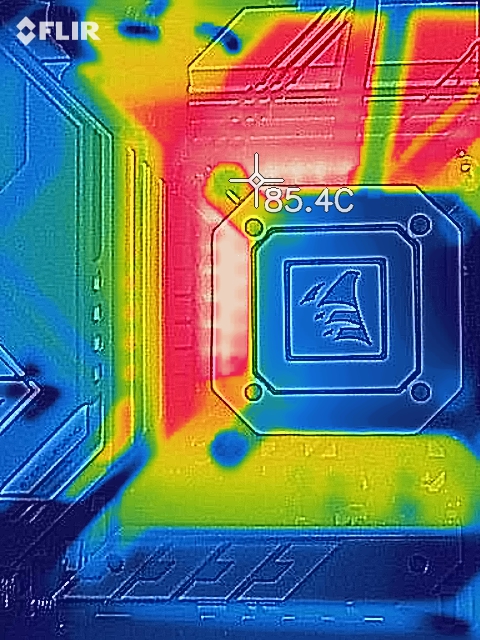 In regards to overclocking on the ASRock, we saw a mixed bag of results. Despite being able to overclock our testbed Core i9-11900K to 5.2 GHz stable, with no thermal throttling in play, we noticed the board's VDroop control to behave a little more erratically than we would have liked. To give an example, when we input 5.1 GHz and 1.325 V to the CPU VCore in the BIOS, at full-load, the CPU core voltage would hit 1.404 V, which is an overshoot of around 5%; we know our processor is capable of 5.1 GHz with 1.30 V on the CPU VCore on some of the more expensive boards. In our VRM thermal testing, we also saw that the integrated VRM temperature sensor was inaccurate, as we observed temperatures ranging from 87 to 88ºC on our pair of K-Type thermocouples.

Looking at the $200 to $250 price point in the Z590 market, there are quite a few models in competition with the Steel Legend, including ASRock's own Z590 Extreme4 WiFi 6E ($248), GIGABYTE's Z590 Aorus Elite AX ($220, the MSI MAG Z590 Torpedo ($236), and the ASUS TUF Gaming Z590-Plus ($240). While most of the aforementioned boards include similar specifications and core features, the ASRock bucks the trend in the price point and includes Intel's Wi-Fi 6E CNVi, which is a massive plus for ASRock in the features versus cost equation. The ASRock Z590 Steel Legend WiFi 6E commands a decent position in a very stacked market, but it's time to see how it stacks up in terms of performance.

Read on for our extended analysis.