Kioxia (formerly Toshiba Memory) is announcing the new XD6 series datacenter NVMe SSDs, featuring PCIe 4.0 support and using the EDSSF E1.S form factors. The XD6 is Kioxia's first mass-produced product to use an EDSFF form factor, and may end up being one of the first widely-available products using an E1.S form factor.

Kioxia started their PCIe 4.0 transition earlier this year with the CD6 and CM6 NVMe SSDs, and also launched the related PM6 24G SAS SSD. Those drives are mostly designed for the storage appliance and traditional server markets, using the well-established 2.5" SSD form factor, supporting a broad range of capacities and endurance tiers and offering advanced features like dual-port support and multiple namespaces. The new XD6 series focuses more specifically on the hyperscale datacenter market and is based on a new controller architecture that is separate from that used in the CD6/CM6/PM6 family, but includes the same upgrade to 96L 3D TLC NAND flash memory.

Driven by the needs of hyperscalers like Facebook, the XD6 is tuned more for power efficiency than raw single-drive performance. The capacity options are more limited, and only one endurance tier (1 DWPD) is offered. Many of the more advanced reliability features like dual-port support and multiple sector sizes including Protection Information have been omitted, reflecting the fact that hyperscale datacenters apply the "cattle, not pets" mindset to entire racks or more—redundancy is managed in software on a broader scale, and it's not cost-effective at that scale to treat individual drives as mission-critical. 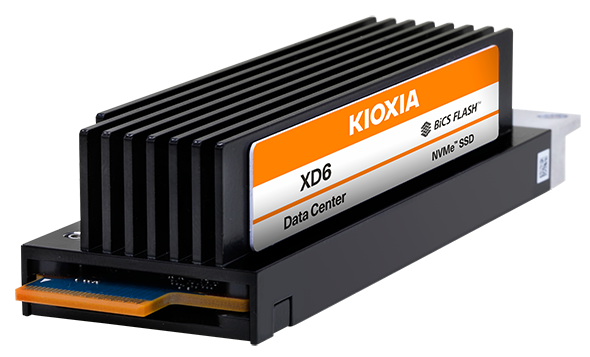 Compared to the previous-generation XD5 SSDs, the most obvious and significant change the XD6 brings is the switch from M.2 22110 and 2.5"/7mm U.2 form factors to EDSFF E1.S. The introduction of EDSFF to Kioxia's product line with the XD6 was hinted at in their roadmap over a year ago, but we didn't expect it to be such an aggressive transition: the M.2 option has been dropped and the 2.5" U.2 version will be launching after the EDSFF versions.

Hyperscalers are the main driving force behind the new EDSFF family of form factors, and within that market segment the EDSFF form factors are catching on quite well. Transitioning to PCIe Gen4-capable platforms also provides a convenient opportunity to adopt a new form factor that combines the density of M.2 with the hot-swappability and higher power support of U.2 drives. The XD6 uses the E1.S form factor (1U height, short length) with three different thicknesses: 9.5mm with a heatspreader case, and 15mm or 25mm with different heatsink sizes. All three versions of the XD6 use the same PCB and offer the same performance and power consumption; the different thickness options primarily trade off between density and airflow requirements.

The combined effects of PCIe 4.0 support, newer NAND flash memory, and a new form factor supporting higher power levels mean the XD6 is dramatically faster than the preceding XD5. Sequential performance is up by a factor of 2.5, random IO performance is up by a factor of four. But power draw has only doubled, from 7W to 14W—so the XD6 is clearly not sacrificing any power efficiency to deliver this improved performance.

The XD6 was designed to comply with an Open Compute Project (OCP) standard for NVMe cloud SSDs. This standard sets performance and power targets and requires many features that are declared optional by the base NVMe specification but are valuable for hyperscale datacenter usage. The XD6 is currently in qualification with big customers like Facebook but general availability is still months away. (Not that there's much demand for EDSFF drives yet outside of the hyperscale segment, given the very limited options for purchasing servers with PCIe 4.0 E1.S slots.)

The Rest Of Kioxia's SSD Lineup

As mentioned above, Kioxia's high-end enterprise and datacenter product lines have already been updated this year and are still near the beginning of what are usually the longest product cycles in the whole lineup. The CM6 and CD6 added U.3 support with backwards compatibility with U.2 ports, but those two families and the PM6 SAS SSDs are still using the familiar 2.5"/15mm form factor. The CD6 and the new XD6 are splitting the datacenter segment, with the CD6 serving as the 2.5" option and the XD6 as the EDSFF E1.S option.

The decision to drop the lowest 960GB capacity option from the XD series means the XD6 is even less suitable than the XD5 for server boot drive usage. Kioxia has also marketed the client XG series for this purpose, but those drives lack power loss protection and are thus considered unsuitable by many customers (unless used in a system with provisions for off-drive power loss protection). This is a small but important product segment, with currently very few options offering the ideal combination of low capacity, small form factor (M.2 2280 instead of 22110) and power loss protection. Kioxia is at least considering developing a drive for this segment, but if they do we won't be seeing it anytime soon.

Kioxia's HK6 is the end of the road for their enterprise/datacenter SATA products and won't be getting a successor, but Kioxia hasn't quite discontinued it yet. (The client SG6 SATA SSD has already reached EOL.) 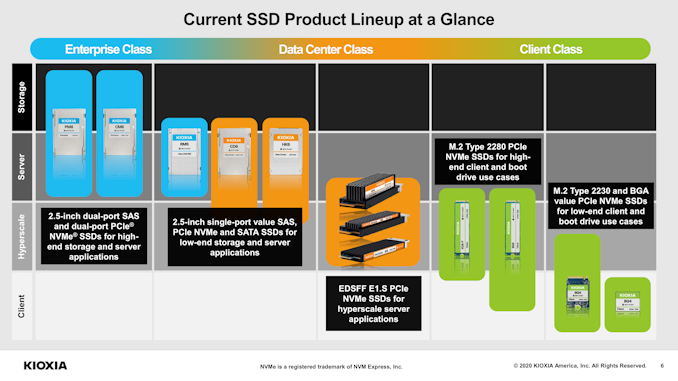 Moving to the client/consumer end of the product line, the XG series of client NVMe drives is due for an update. The XG6 was the first drive released with 96L 3D TLC and it's now pretty old. The XG7 has not been formally announced by Kioxia but did pass compliance testing with UNH-IOL over the summer and is listed on their NVMe Integrator's List. The XG7 will be a PCIe Gen4 NVMe SSD, and based on typical Toshiba/Kioxia strategy they might not be in a hurry to release it until PC OEMs are shipping Gen4-capable pre-built desktops and notebooks in large volume. We haven't heard much new about low-end client/consumer SSDs. UNH-IOL's NVMe Integrator's List shows the AG1 as a M.2 2230 or BGA SSD, so that's possibly a BG series replacement. XT1 is also listed for their XFMEXPRESS form factor. Both are PCIe 3 drives that have not been officially announced by Kioxia, and went through compliance testing almost a year ago.

Aside from a few region-specific models that use third-party controllers, Kioxia doesn't currently have retail consumer SSD products. The XG and BG families of client NVMe drives have been OEM-only for most of their history, and there's no sign of Kioxia changing that strategy.