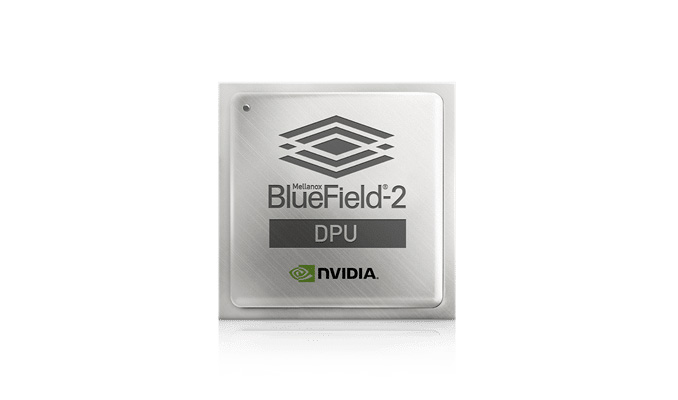 Continuing this morning’s run of GTC-related announcements, NVIDIA is offering yet another update on the state of their Data Processing Unit (DPU) project. An initiative inherited from Mellanox as part of that acquisition, NVIDIA and Mellanox have been talking up their BlueField-2 DPUs for the better part of the last year. And now the company is finally nearing a release date, with BlueField-2 DPUs sampling now, and set to ship in 2021.

Originally hatched by Mellanox before the NVIDIA acquisition, the DPU was Mellanox’s idea for the next-generation of SmartNICs, combining their networking gear with a modestly powerful Arm SoC to offload various tasks from the host system, such as software-defined networking and storage, as well as dedicated acceleration engines. Mellanox had been working on the project for some time, and while the original BlueField products saw a relatively low-key release last year, the company has been hard at work on Bluefield-2, which NVIDIA has since elevated to a much greater position. 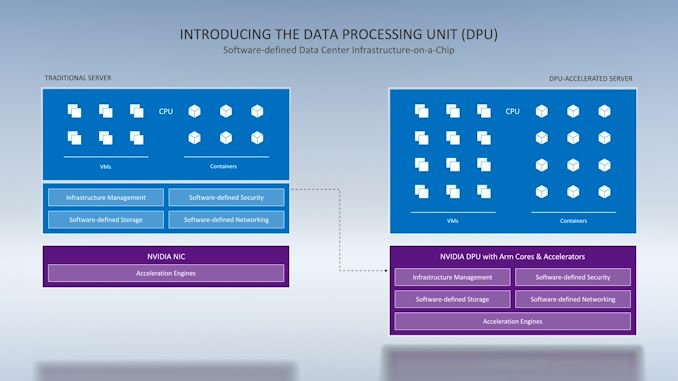 This second generation of DPU-accelerated hardware will go under the BlueField-2 name, and the two companies have been talking about it for most of the past year. Based on a custom SoC, the BlueField 2 SoC uses 8 Arm Cortex-A72 cores along with a pair of VLIW acceleration engines. All of this is then paired with a ConnectX-6 DX NIC for actual network connectivity. At a high level, the DPU is intended to be the next step in the gradual movement towards domain-specific accelerators within the datacenter, offering a more specialized processor that can offload networking, storage, and security workloads from the host CPU.

Coming off of their success in the datacenter market from broadening applications for GPUs, it’s easy to see NVIDIA’s interest in the DPU project: this is another piece of silicon they can sell to server builders and datacenter operators, and further undermines the importance of the one thing NVIDIA doesn’t have, a server-class CPU. So although not a project stated by NVIDIA, it’s a project they’re full embracing and expanding upon.

As the bulk of today’s DPU announcement is a recap for NVIDIA, the actual product plans for BlueField-2 have not changed. NVIDIA will be releasing two DPU-equipped cards, the BlueField-2, and the BlueField-2X. The former is a more traditional SmartNIC with the DPU and 2 100Gb/second Ethernet/InfiniBand ports. This allows it to be used for networking as well as storage tasks like NVMe-over-Fabrics. 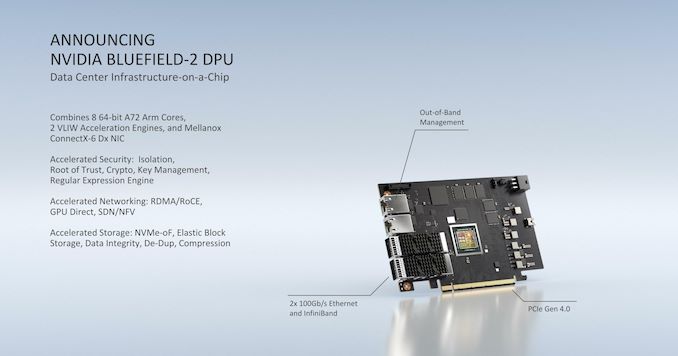 Meanwhile the larger Bluefield-2X incorporates a DPU as well as one of NVIDIA’s Ampere-GPUs for further acceleration via in-network computing, as NVIDIA likes to call it. NVIDIA hasn’t disclosed the GPU used on the BlueField-2X, but if these renders are accurate, then the number of memory chips indicates it’s GA102, the same chip going into NVIDIA’s high-end video cards. Which would make BlueField-2X a very potent card with regards to compute performance.

And NVIDIA’s plans don’t stop with the BlueField-2 products. The company has planned out a series of cards based on BlueField-2, which will be released as the BlueField-3 and BlueField-4 family in successive years. BlueField-3 will be a souped-up version of BlueField-2, with separate DPU and DPU + GPU cards. Meanwhile BlueField-4 will be the first part where NVIDIA’s influence makes it into the core silicon, with the company planning a single high-performance DPU that would be able to significantly outperform the easier discrete DPU + GPU designs. All told, NVIDIA is expecting BlueField-4 to offer 400 TOPS of AI performance. 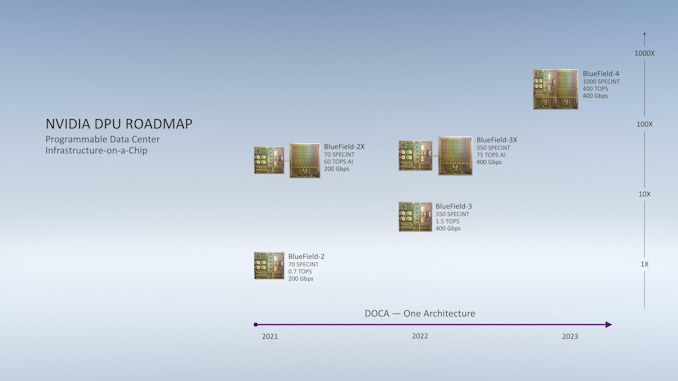 All of this, in turn, will come with NVIDIA’s traditional embrace of both hardware and software. The company is looking to mirror its CUDA strategy with DPUs, offering the Data Center Infrastructure-on-a-Chip Architecture (DOCA) as the software stack and programming model for BlueField 2 and later DPUs. This means assembling high-grade SDKs for developers to use, and then extending support for those SDKs and libraries over multiple generations. NVIDIA is clearly just getting DOCA off of the ground, but if history is any indication, software will play a huge role in the growth of the SmartNIC market, just like it did GPUs a decade prior.

Wrapping things up, the first BlueField-2 cards are now sampling to NVIDIA’s partners. Meanwhile commercial shipments will kick off in 2021, and BlueField-3 shipments may follow as soon as 2022.