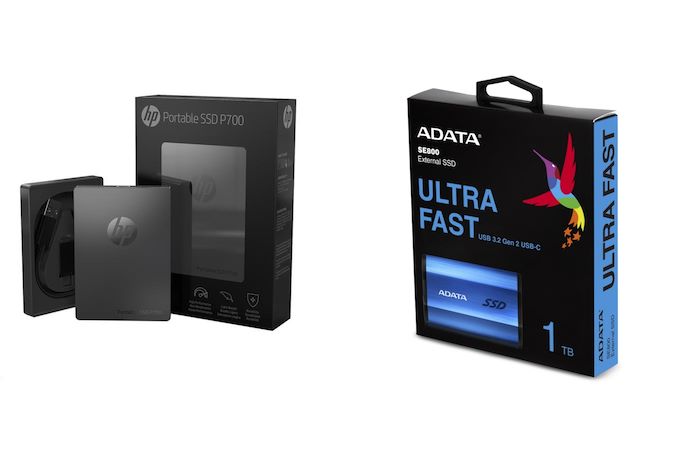 Portable flash-based storage solutions are one of the growing segments in the direct-attached storage market. The emergence of 3D NAND with TLC and QLC has brought down the cost of such drives. NAND manufacturers like Western Digital, Samsung, and Crucial/Micron who also market portable SSDs have an inherent advantage in terms of vertical integration. However, the current pace of progress in flash memory has led to competitively priced offerings even from vendors who need to buy flash in the open market. ADATA and HP (Multipointe / Biwin) are two such vendors in this space. Today's review takes a look at six different portable SSDs - three each from ADATA and HP - forming the bulk of their 2020 portfolio of external flash storage solutions.

External bus-powered storage devices have grown both in storage capacity as well as speeds over the last decade. Thanks to rapid advancements in flash technology (including the advent of 3D NAND and NVMe) as well as faster host interfaces (such as Thunderbolt 3 and USB 3.x), we now have palm-sized flash-based storage devices capable of delivering 2GBps+ speeds. While those speeds can be achieved with Thunderbolt 3, mass-market devices have to rely on USB. Entry-level USB drives utilize a flash controller with a direct USB interface, while the mid-range and high-end ones use flash packages behind either a SATA or NVMe SSD controller in conjunction with a SATA/NVMe-USB bridge. Depending on the target market, vendors use bridges with either a USB 3.2 Gen 1 or USB 3.2 Gen 2 host interface. Recently, we have seen a few devices come with USB 3.2 Gen 2x2 interfaces also.

In today's review, we take a look at almost all of the external SSD offerings in the 2020 portfolio from ADATA and HP. 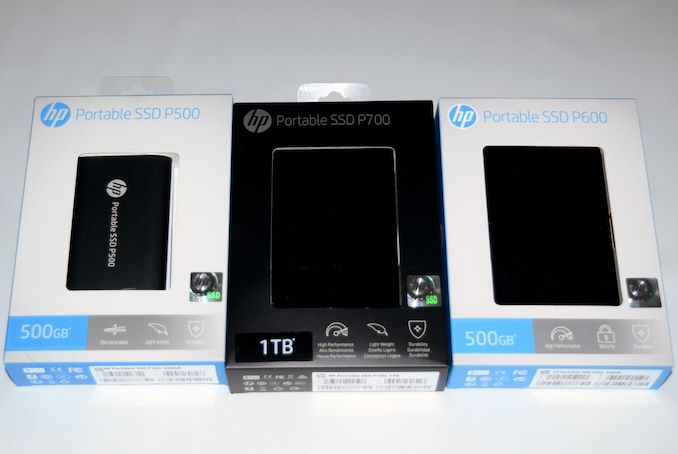 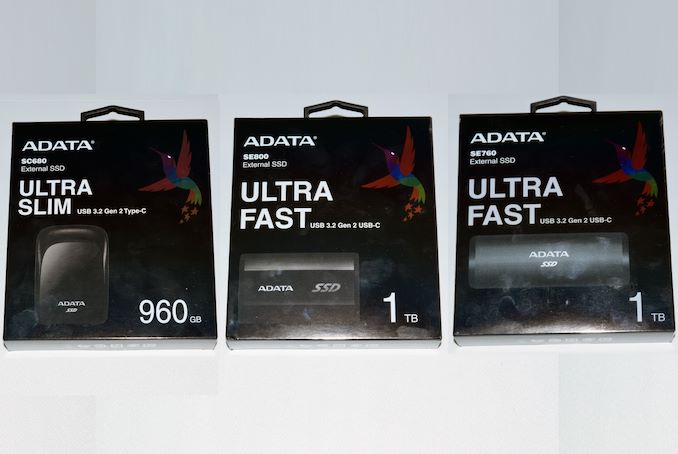 From a performance viewpoint, the devices being considered today fall under two categories that are referred to here on as 1GBps-class and 500MBps-class. The former ones use NVMe SSDs behind a USB 3.2 Gen 2 bridge, while SATA SSDs (or even direct flash packages) behind a USB 3.2 Gen 1 or Gen 2 bridge make up the latter typically. We updated our benchmark programs set for direct-attached storage devices earlier this year, and subjected the following new devices to our refreshed evaluation scheme:

While the 500MBps-class drives are only compared against each other, the 1GBps-class ones are pitted against the following external SSDs that were reviewed earlier:

A quick overview of the internal capabilities of the 1GBps-class drives is given by CrystalDiskInfo.

The ADATA SE800 and HP P700 are both revealed to be NVMe drives behind a UASP-supporting USB bridge, which is along expected lines. The ADATA SE760 screenshot shows that the device internally uses an ADATA SX6000LNP SSD, which happens to be the ADATA XPG SX6000 Lite PCIe 3.0 x4 M.2 NVMe SSD. Other than that, we have the customary S.M.A.R.T passthrough confirmation.

CrystalDiskInfo statistics are available only for the ADATA SC680 and HP P600 in the 500MBps-class set - these are the ones using a SATA SSD behind a USB bridge. The HP P500, as we shall see in the teardown later, uses a USB flash controller and doesn't report any information that can be parsed by the tool.

Both the ADATA SC680 and HP P600 have S.M.A.R.T information being passed on from the SATA SSD side through the USB bridge. The ADATA SSD seems to have better support for monitoring compared to the P600's multiple vendor-specific fields. However, both drives supported TRIM when tested in practice.

Evaluation of DAS units on Windows is done with a Hades Canyon NUC configured as outlined below. We use one of the rear USB Type-C ports enabled by the Alpine Ridge controller for both Thunderbolt 3 and USB devices.

Our evaluation methodology for direct-attached storage devices adopts a judicious mix of synthetic and real-world workloads. While most DAS units targeting a particular market segment advertise similar performance numbers and also meet them for common workloads, the real differentiation is brought out on the technical side by the performance consistency metric and the effectiveness of the thermal solution. Industrial design and value-added features may also be important for certain users. The remaining sections in this review tackle all of these aspects after analyzing the features of the drives in detail.