Like other vendors, Supermicro hasn't changed much in its firmware design since the jump from Z390 to Z490. Using a very similar UEFI BIOS to the previous C9Z390-PGW, the C9Z490-PGW only differs in the menus' complexity, with a new set of options for Comet Lake's Thermal Velocity Boost (TVB) feature. The SuperO firmware uses a uniform GUI, which includes a primarily black color scheme, with shades of grey and blue throughout. The text is white, with highlights in a darker shade of blue to signify which option is currently selected. The firmware also has two primary modes, including an EZ mode and Advanced, including all of the customizable options and functions. 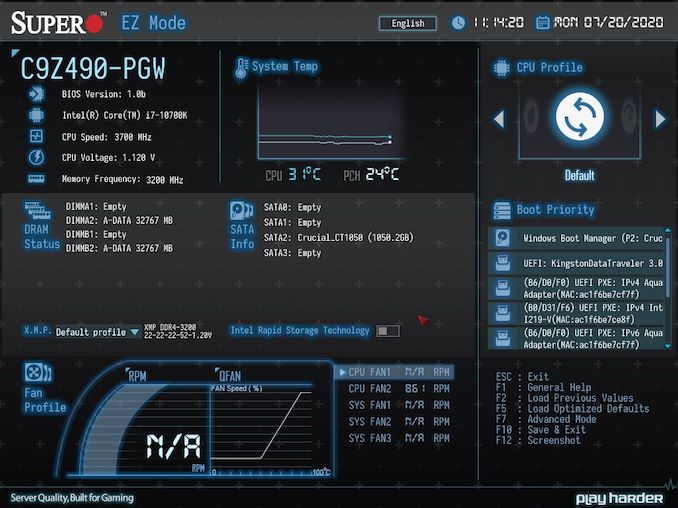 When booting into the BIOS for the first time, users will be greeted with the EZ mode, including a variety of key and vital information. From top to bottom, the EZ mode includes information about the BIOS version installed onto the 256 Mb BIOS chip and information about the installed processor, memory, and storage. Users can enable X.M.P 2.0 profiles on supported memory at the click of a button, with a fan profile information panel that resembles a tachometer. On the right-hand side, users can choose between three profiles specific overclocking profiles, including default, OC mode, and auto-tuning, which affords the board the ability to overclock the processor based on set parameters within the firmware. 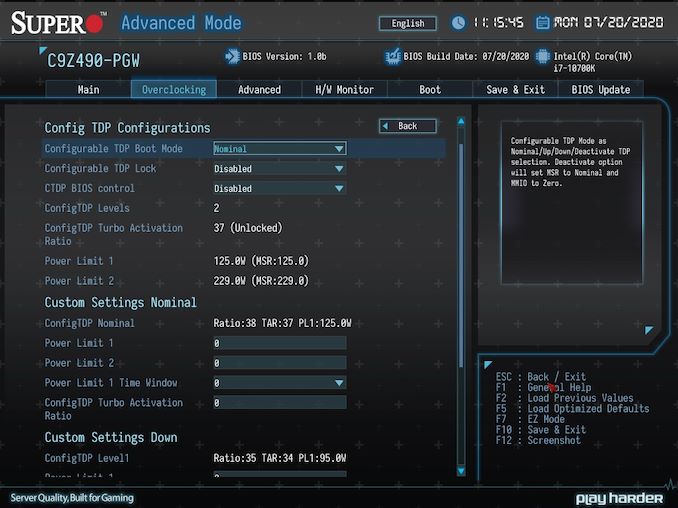 Some of the board's most important settings for maximizing performance come under the TDP Configuration settings. This is where users can configure the power limit settings, which are inherently set to Intel default specifications, with no profile or settings to enable a form ofmulti-core enhancement (MCE). This means that when a processor is installed into the C9Z490-PGW, it runs to Intel's recommendations without any tampering to PL or Tau, which most vendors implement on its firmware by default to give it an edge over the competition. Although the board is more than capable of handling extra power and overclocks, the decision is with the end-user.

The rest of the board's firmware includes overclocking options, which can be found under the aptly named overclocking tab. This includes multiple settings, including CPU frequency configuration either by all-core or per-core, and options for BCLK control, voltage controls for multiple areas, including CPU VCore, CPU PLL, VSCIO, as well as advanced memory options for altering things such as frequency and latencies. Overall the firmware is neatly presented, includes a fan profile customization utility, and includes multiple security options, which the vast majority of Supermicro motherboards include. Despite this being a consumer Z490 motherboard, Supermicro plays to its strengths. The board, which resembles the firmware, shows the board is more than capable of use in a professional environment.

The only piece of software included with the C9Z490-PGW is the SuperOBooster utility. This is also supported by the Realtek Audio HD Manager software, which accompanies the drivers for the ALC1220 HD audio codec. This allows users to customize and tweak the audio settings and add reminiscent effects of the Windows XP days. 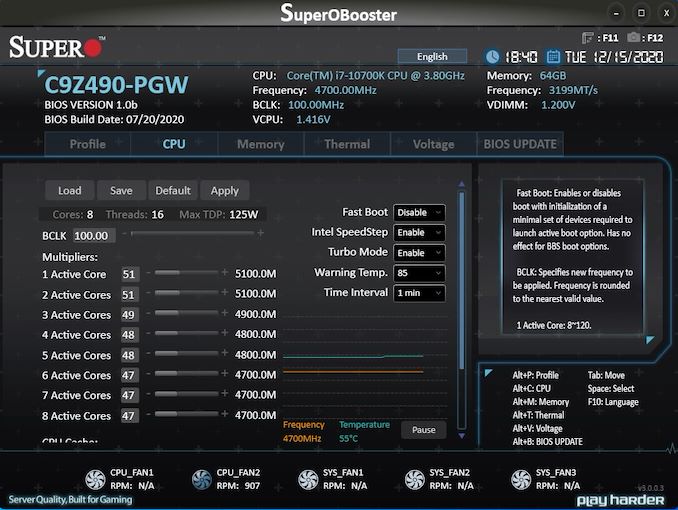 It includes a mixture of various software elements, including overclocking functionality for both the CPU and memory and making on-the-fly voltage and load-line calibration adjustments. One interesting element to consider in our testing is that when we made alterations within the software, upon rebooting and entering the firmware, these changes would be consistent, meaning that both the software and firmware work hand in hand. Users can also customize the fan profile settings under the Thermal tab, with customization options available per header, not including the water pump header, and sync them up. The last tab allows users to update the firmware with the latest version available to download from the Supermicro servers.