The display panel of the ZenFone 7’s is made by Samsung and comes in at a resolution of 2400 x 1080 and a 90Hz refresh rate. There’s nothing too much out of the ordinary for the specs, and represents the middle-ground of what we should expect out of a 2020 smartphone.

Calibration-wise, we see the same display profiles page as on the ROG Phone III, giving us a few different display profiles to choose from. I noted that out of the box the ZenFone 7 was quite blue on its default profile, however switching over to the “Standard” profile will give you the most accurate sRGB colour profile with colour temperature near a 6500K target.

We move on to the display calibration and fundamental display measurements of the ZenFone 7 Pro screen. As always, we thank X-Rite and SpecraCal, as our measurements are performed with an X-Rite i1Pro 2 spectrophotometer, with the exception of black levels which are measured with an i1Display Pro colorimeter. Data is collected and examined using Portrait Display's CalMAN software. 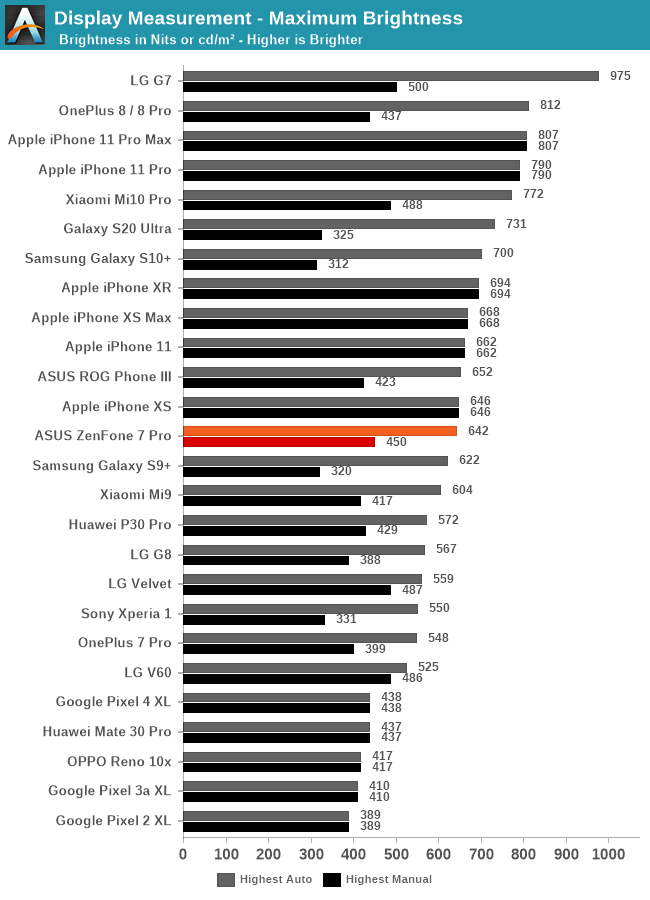 In terms of brightness, the phone reaches 450nits in maximum manual mode, while boosting up to 652nits at full-screen white (100% average picture level).  It’s very respectable and gives good legibility in sunlight, albeit a bit behind some of the newer generation displays from the competition.

In the standard profile, colour temperature on my ZenFone 7 Pro sample was a little warm as whites came in at 6340K and average colour temperature over the levels range ended up at 6251K. I actually noted this out of the box, and I preferred to use the colour temperature slider to slightly give cooler tones. We’re still measuring and publishing the default settings for the article though.

In terms of gamma, the ZenFone 7 Pro exhibits the same characteristic as the ROG Phone III in that the device is targeting a 2.4 target rather than the standard 2.2 target for typical web content and the sRGB profile. This results in slightly darker tones in colours. 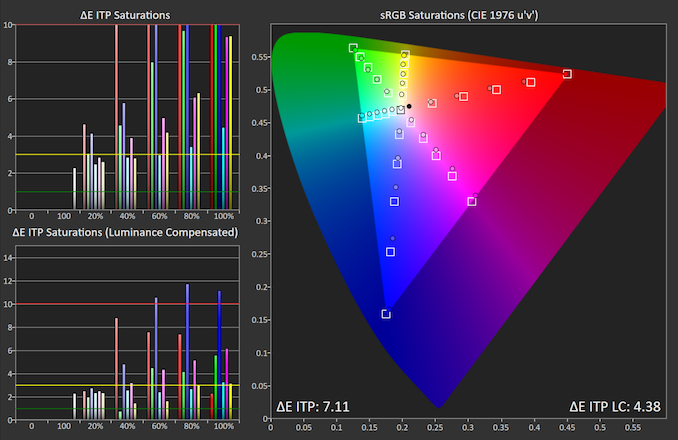 The saturations accuracy in the sRGB gamut weren’t as good as on the ROG Phone III. Beyond the colour temperature and gamma offset, the ZenFone 7 Pro also showcased some off-hue colours in the magenta range, with some undersaturated reds and blue mid-levels. 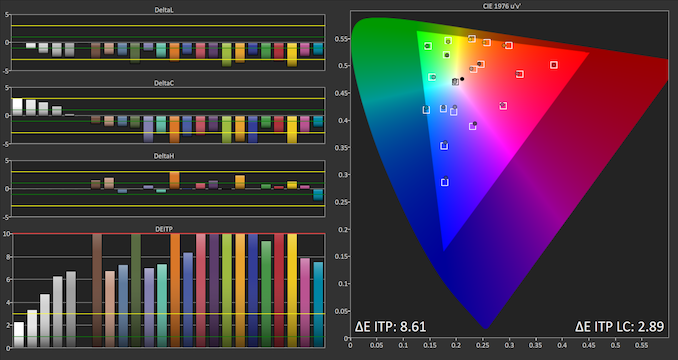 The Gretag MacBeth test fared a little better, although unlike the ROG3 where the errors mostly lay in the luminosity of the colour patches, the ZenFone also has a stronger off-target saturations, mostly being undersaturated.

ASUS’s marketing claims of some unspecified deltaE of below 1 however are quite far-fetched as beyond the non-standard gamma you also have quite a bit of off-target colour temperature as well as saturation mishaps. I wish vendors would stop proclaiming specifications which just don’t hold up in practice.

Overall, the display of the ZenFone 7 Pro is pretty adequate and well in line with competing devices at this price range.