Kicking off another earnings season for the tech industry, we once again have Intel, who is reporting their financial results for the second quarter of the year. This is the first full coronavirus-impacted quarter for the company and the tech industry as a whole, but if you were looking solely at Intel’s results, you wouldn’t know there’s a pandemic going on: the company posted yet another record quarter, delivering their highest Q2 revenues ever with a sizable profit margin riding on top of that.

For the second quarter of 2020, Intel reported $19.7B in revenue, more than $3B ahead of their year-ago quarter, and only slightly behind Q1’s $19.8B in revenue. As a result of this strong revenue, income was also very healthy for the company, with Intel recording $5.1B in net income, a 22% jump over Q2’19.

It is interesting to note, however, that Intel’s famed gross margin took a pretty sizable hit for the most recent quarter. Intel recorded a gross margin of just 53.3%, well below the 60% margin the company is known for. This matter was briefly mentioned in the company's earnings call, where the larger-than-expected drop was labeled as being largely a timing item, with Intel taking a hit as they ramp up Tiger Lake. At the same time, however, 10nm demand overall is higher, which although is not a bad problem to have, 10nm is more expensive to build on than Intel's well-refined (and paid for) 14nm fabs.

Breaking things down on a group basis, many of Intel’s internal reporting groups have grown over the year-ago quarter, and some quite significantly. Client computing revenue was up 7% to $9.5B, while data center revenue was the big winner in terms of growth, with $7.1B in revenue making for a 43% jump over the previous year. The significant growth in the data center segment comes thanks in part to a big jump in cloud service provider revenue, which was up 47% year-over-year. That, in turn, was driven in part by Intel’s recently-launched Cooper Lake Xeon processors, which has the major server providers cycling in systems using those new chips.

As for client computing revenue, the biggest gains there once again came from notebook sales, which have taken off in the face of the coronavirus pandemic. All-told, notebook revenue is up 14% over Q2’19, while slower desktop sales have caused desktop sales to drop by 14%. The net result is that PC sales were up 2% year-over-year, with desktop and notebook ASPs ticking up slightly as well.

Rounding out Intel’s product portfolio, the company’s Non-Volatile Memory Solutions Group was the other big winner for the company. Revenue there reached $1.7B, 76% higher than Q2’19, and 24% over last quarter. This was driven by growth in both ASPs and volume (bit growth), allowing Intel to book more revenue at every level. The Programable Solutions Group, on the other hand, saw a very mild 2% increase in revenue.

Unfortunately for Intel, their Internet of Things sub-groups didn’t fare very well, in part due to greater exposure to the coronavirus pandemic. The IoT Group itself saw revenues fall 32% from Q2’19, dropping to $816M. Meanwhile Mobileye was equally exposed, seeing a 27% drop to $146M in revenue. 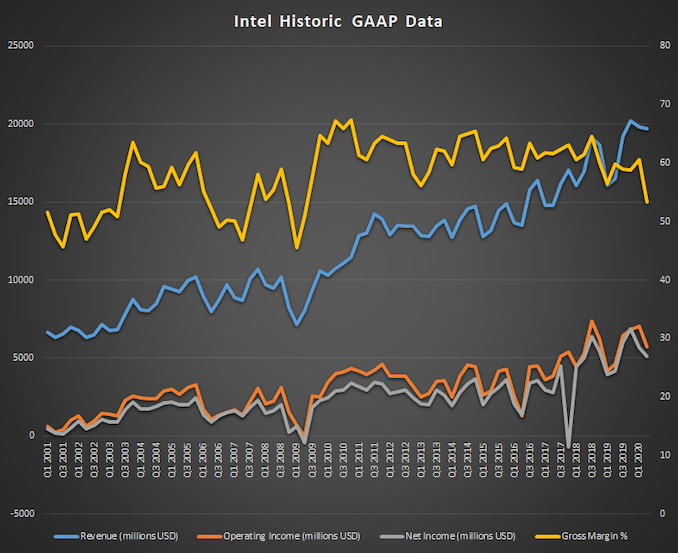 Overall, Intel believes that they’ve weathered the current pandemic fairly well – something no one was quite sure of a quarter ago – which is reflected in their Q2 results. Some business units have fared better than others, but ultimately demand for the company’s chips remains high, albeit in a different mix than Intel would have seen in more normal circumstances. Reflecting this optimism, at point the company has resumed providing full-year guidance: they are now expecting 2020 to be Intel’s best year ever, making for their fifth record year in a row.

Unfortunately for Intel, while the coronavirus hasn’t tripped them up too much, their own internal issues are, and as a result Intel’s long-term situation is more muddled than ever. As part of today’s earnings release the company is announcing that their 7nm CPU plans have been pushed back by 6 months, and that 7nm yields are about 12 months behind where Intel planned for them to be. This is due to a defect in their 7nm process, which the company has since root caused and is correcting, but none the less it’s caused a 7nm delay they can hardly afford. Intel’s first consumer 7nm chips are now not expected to land until at least late 2022, if not later.

We’ll have more on this subject in a separate article a bit later today, but the fallout from the delay is that Intel is now planning to take a far more pragmatic approach to fab utilization. Which is to say that the company is keeping their options open for using third-party fabs if that proves to be their best option, making full use of their die disaggregation technologies like Foveros to mix-and-match dies from different sources as necessary.

In the meantime, the big winner within Intel is the company’s 10nm process, which the company is going to have to lean on more heavily in light of the 7nm delay. According to Intel they have further accelerated their 10nm ramping due to growing demand for 10nm products – both PC and comms/5G – with Tiger Lake shipments set to be 20% higher than what Intel was originally planning for back in January. So while 10nm has been something of an albatross for Intel, it’s not going to be a short-lived manufacturing node as Intel rushes to 7nm; instead it’s going to be a core part of their plans for the next two or three years.