The ASUS ROG Strix B550-F Gaming Wi-Fi follows a very flamboyant design with pink highlights on both the rear panel cover and chipset heatsink. The rest of the board follows a black conventional ROG design with diagonal printing on the PCB with Republic of Gamers branding throughout. It blends in from the top of the rear panel cover, all across the PCB and opts for a graffiti-inspired uniformed look. In addition to the illuminated and RGB enabled ROG logo is a pair of Aura RGB headers, with a single addressable RGB header which allows users to add a bit of pizazz to the already unconventional styling.

In the top right-hand corner is four memory slots with support for DDR4-5100, and a total capacity of up to 128 GB. Located around the edge of the board are six 4-pin headers with two for a CPU fan, one for an AIO pump, and three for regular chassis fans. 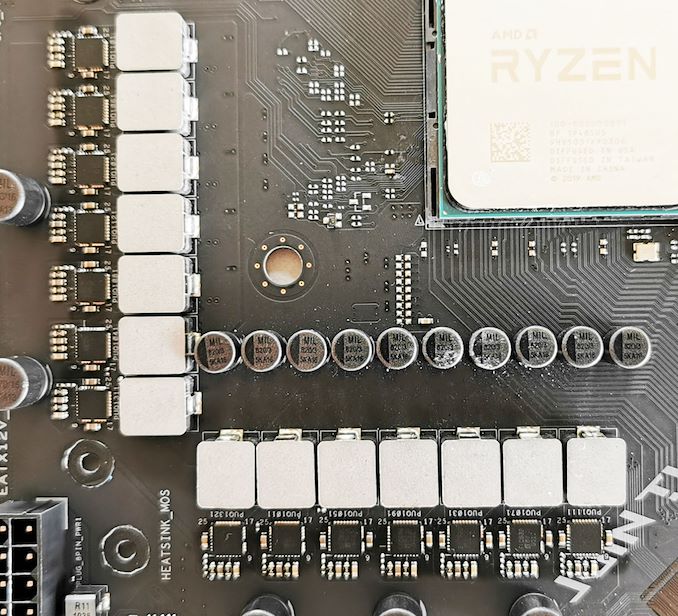 ASUS has opted to used teamed power stages for its power delivery, which ASUS claims improve transient response and efficiency, as well as overall power response when under full-load. The B550-F Gaming Wi-Fi is using a 14-phase design, with twelve teamed Vishay SIC639 50 A power stages for the CPU, and two SiC639 50 A power stages for the SoC. The controller of choice is the ASP1106JGQW which is a 6-phase controller, which looks to be operating at 4+2. This means the signal is being split with three power stages active per channel, as mentioned previously, in teamed mode. Providing power to the CPU is an 8-pin and 4-pin 12 V ATX CPU power input pairing. 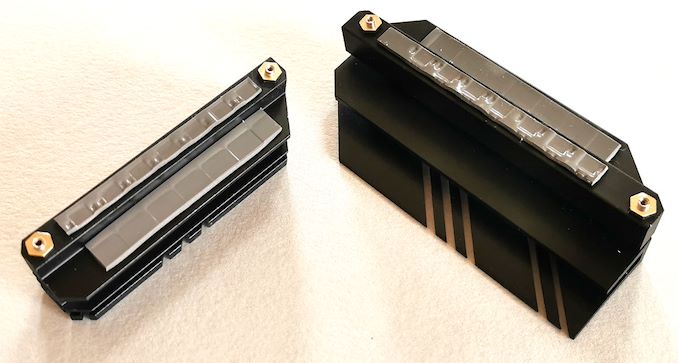 Cooling the 14-phase power delivery is a large pair of black aluminium heatsinks. On each part of the power delivery heatsink is a thermal pad strip, with good contact made between the top of the chokes and power stages and the heatsink itself.

The audio section of the PCB includes a SupremeFX S1200A HD audio codec, with two OP-Amplifiers designed to boost the audio performance. To the right-hand side of the Amps is nine gold Japanese audio capacitors, with a smaller audio capacitor next to the audio codec. It also features a line of PCB separation which should aid in reducing interference from other components on the board.

Looking at the rear panel, ASUS includes a competitive array of input and output, which includes one USB 3.2 G2 Type-C, one USB 3.2 G2 Type-A, four USB 3.2 G1 Type-A, and two USB 2.0 ports. Representing the mid-range with a solid feature set, the networking on the B550-F Gaming Wi-Fi includes a single RJ45 port powered by an Intel I225-V 2 GbE Ethernet controller, with an Intel AX200 Wi-Fi 6 CNVi module. ASUS has included a pair of video inputs with a DisplayPort 1.2 and HDMI 2.1, with five 3.5 mm audio jacks and S/PDIF optical output powered by a SupremeFX S1200A HD audio codec, and a handily located BIOS flashback button. 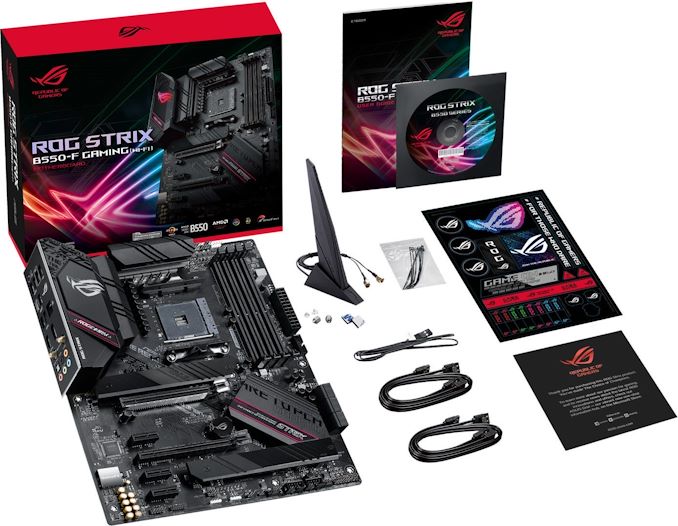 The most notable accessories included in the bundle are four black SATA cables, a ROG sticker sheet, a set of cable ties, an Intel AX200 Wi-Fi 6 antenna, and an M.2 SSD installation screw kit.