With most brands opting for a light-handed W480 product stack, ASUS currently has just one model. The ASUS Pro WS W480-Ace is a premium model with an extensive feature set including dual Thunderbolt 3 Type-C ports on the rear, an Intel 2.5 GbE Ethernet port, with a Realtek Gigabit Ethernet port for ASUS's own control software, and two PCIe 3.0 x4 M.2 slots. 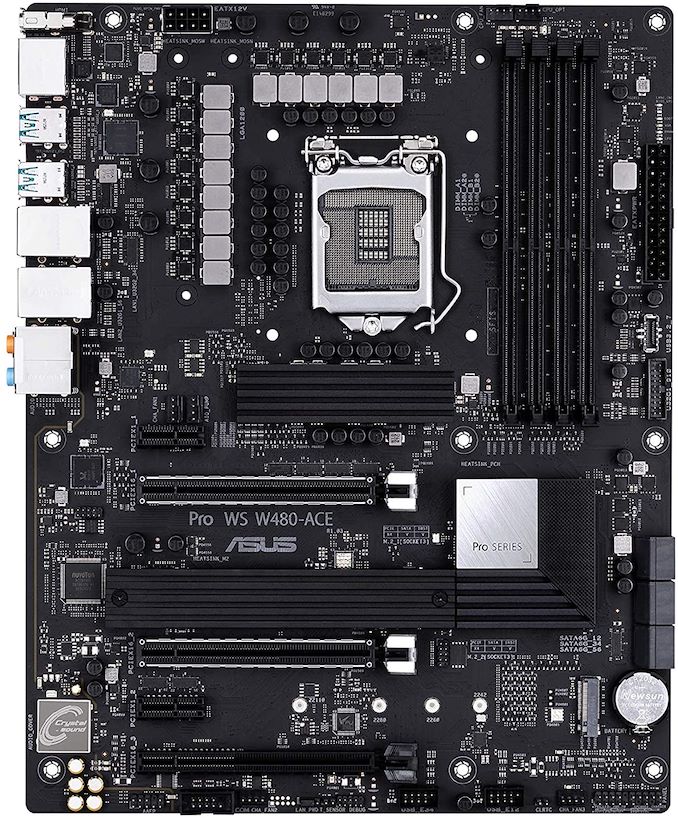 The ASUS Pro WS W480-Ace follows a similar design to previous WS series models from ASUS, with an all-black aesthetic with a black PCB, black straight-edged heatsinks, and a silver plate on the chipset heatsink. Dominating the lower portion of the board are three full-length PCIe 3.0 slots which operate at x16, x8/x8, and x8/x8/+x4, and also has two PCIe 3.0 x1 slots. There are two PCIe 3.0 x4 M.2 slots which each come with an M.2 heatshield, and six SATA ports with support for RAID 0, 1, 5, and 10 arrays. Onboard is a single USB 3.2 G1 Type-C header, while the board has a better quality USB 3.2 G2 Type-C header too. For memory, there are four memory slots with support for up to DDR4-4800, with a maximum capacity of up to 128 GB, and has support for both ECC and non-ECC memory dependant on processor support.

The ASUS Pro WS W480-Ace combines a subtle and sleek aesthetic with a premium controller set. ASUS hasn't provided any pricing as of yet, but we expect this model to sit towards the higher-end of the W480 product stack and will most likely have a price tag to match. The inclusion of dual Thunderbolt 3 Type-C and two Type-C headers provides plenty of connectivity options, with a solid rear panel and a dedicated IPMI interface which can be accessed by one of the rear panel Ethernet ports. The ASUS Pro WS W480-Ace has an MSRP of $280, which represents good value for money when compared to a model with the same feature set on the Z490 chipset.