Motorola Brings Back The Razr: Flip-Phone In 2020 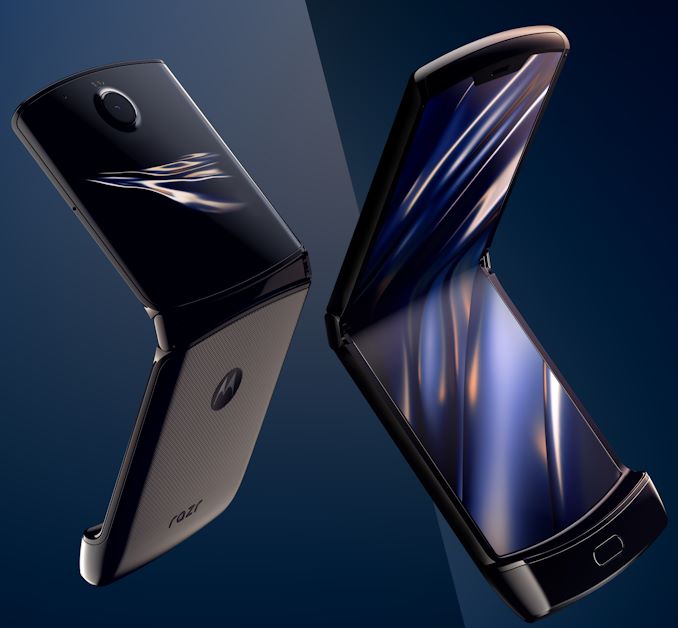 Motorola has today announced a modern successor to one of the most iconic phones ever released: the Razr V3. The popular flip-phone was first released in 2004 and had been a huge success for the company as it went on to sell over a 100M units. The clamshell design was immensely popular as it was a lot thinner and had a unique design. The new Razr takes the core aspects of this design and ports it over to the latest 2019 technologies. At the heart of the new smartphone lies Motorola’s take on foldable displays, giving the new Razr a proper modern “full body screen” experience.

At the heart of the new Razr, don’t expect any kind of flagship components as Motorola had to make due with limited internal space. The phone comes with a Snapdragon 710 SoC which is at the mid-range segment. Similarly, the phone comes with 6GB of RAM, but does at least have 128GB of storage. 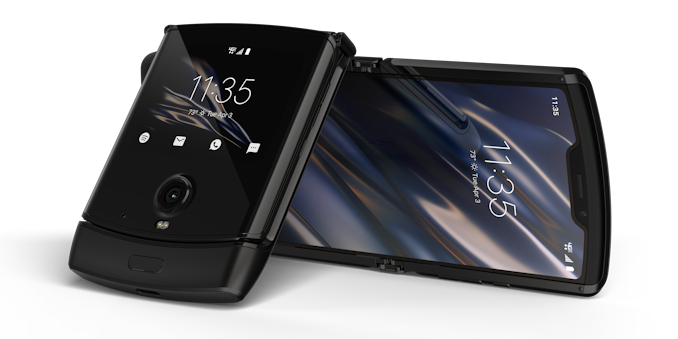 Of course, if you’re interested in the new Razr it’s not because of hardware, but because of its design. Motorola did an excellent job of capturing the Razr clamshell design language and transferring it to the modern age.

At the centre we find a flexible plastic OLED panel with a 6.2” diagonal with a resolution of 2142 x 876. The screen’s elongate 21:9 aspect ratio betrays the true size of the phone as it’s not quite all that wide at 72mm. It’s certainly a bigger form-factor phone than the original Razr which came in at 53mm width.

The top side of the screen sees a display notch – but it’s actually adding to the design of the phone as the whole top design is curved and it has the iconic Razr feel to it. There’s an earpiece speaker as well as a small 5MP f/2.0 front-facing camera. 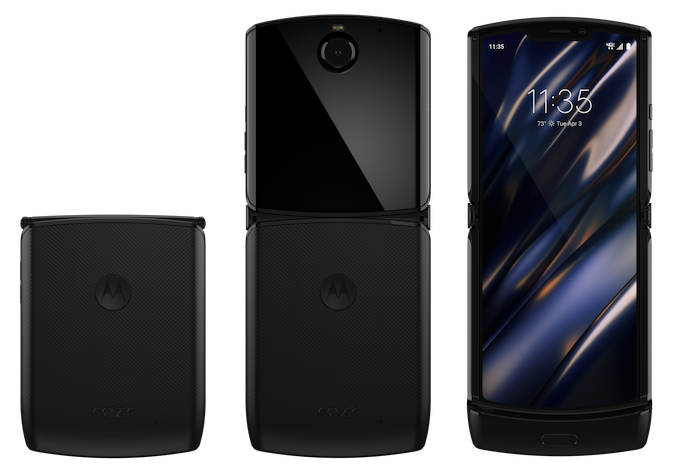 Motorola’s hinge design on the new unit is very unique as the company has been able to avoid some of the compromises and issues as we’ve seen with other foldable phones such as the Galaxy Fold. The main issue with an inward folding phone display is the curvature and radius of the bend – the thickness of your folded design is limited by how aggressively you can actually make the screen fold. 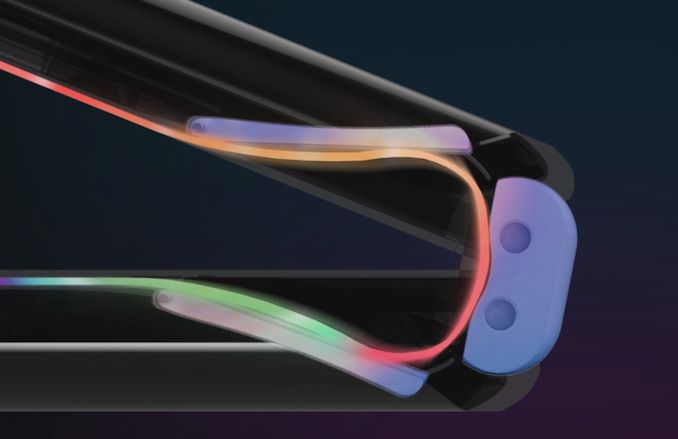 Motorola’s take on the Razr is that the phone has two internal moving plates that allow the screen panel to recess further into the body of the phone when it’s in a folded state, allowing the screen and the bend radius to more fully take advantage of the full 14mm thickness of the phone when it’s folded. Of course, the issue of this design is that you cannot physically achieve it without some give between the screen’s height and the body height as the two cannot be the same between folded and unfolded positions. It’s here that the new Razr’s design is ingenious; when it’s being folded, the whole bottom half of the screen slightly slides into the chin of the phone.

What Motorola did here with this design is allow for more vertical tension on the plastic screen itself. The swivelling internal support plates which allow the screen to bend into the phone body when folded also serve as structural supports for the screen when it’s unfolded. This allows the Razr to essentially solve the middle crease issue we’ve seen in other foldables such as the Galaxy Fold or the Huawei Mate X, giving a much “flatter” screen at the hinge. Motorola’s engineering of the fold screen seemingly seems to be the best we’ve seen so far from any vendor.

Of course, there’s still limitations with the hinge design. For example, there still will be some gaps for particulates to possibly enter the hinge. In Motorola’s renders we see that the hinge gears are visible from the outside when the phone is folded, to which I have to wonder about what happens to the mechanism if there’s any dust or any other debris entering it.

The phone’s I/O consists simply of a USB-C port at the bottom of the phone in the iconic “chin”. We find a bottom speaker and that’s about it in terms of what you’ll find on the phone. There’s no SIM tray as the phone is eSIM only and of course no expandable storage either. The front of the chin sports a fingerprint reader. 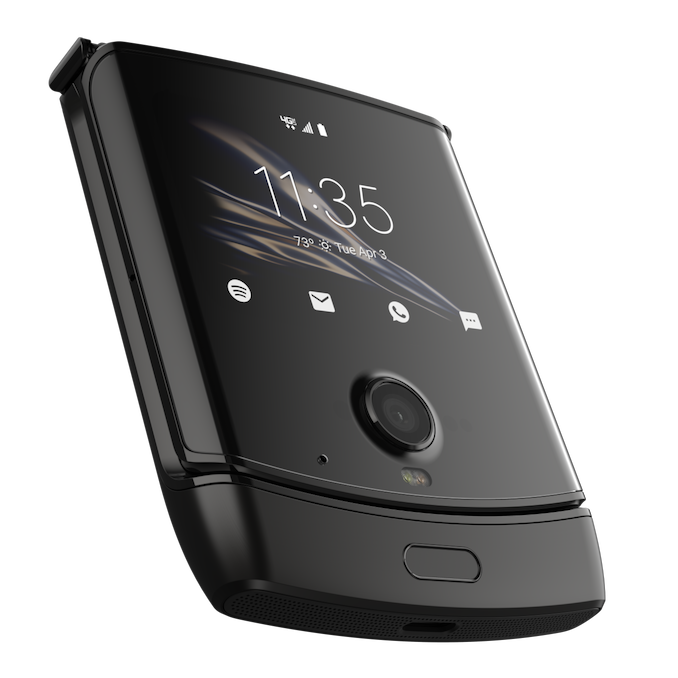 When closed, you the front side of the phone looks excellent and the curved glass panel embeds both a secondary display as well as the main camera. The display is also OLED here, but it’s of a smaller 2.7” diagonal featuring a resolution of 800 x 600 in a 4:3 form-factor.

The main camera is a 16MP unit with 1.22µm dual pixel PD in a f/1.7 lens, but it lacks OIS. Frankly given the phone’s extremely limited z-height of 6.9mm when unfolded we weren’t expecting anything more.

Finally, the phone does appear to be quite heavy at 205g, but is nowhere near the weight of other phones such as the Galaxy Fold or Mate X. The battery is 2510mAh is on the smaller side, but it’s also a less demanding SoC as well as a lower resolution display so we can’t say too much about how battery life might end up.

The new Razr launches December 26th for pre-order with availability on January 9th for a price tag of $1499. Clearly it’s going to be more of a fashion phone rather than being a contender in terms of value it brings, but in terms of design and innovation it brings to the foldable phone segment I think Motorola has been able to achieve something special here, and I’m looking forward to experience the new Razr.