The Samsung 983 ZET (Z-NAND) SSD Review: How Fast Can Flash Memory Get?

Drive throughput with a queue depth of one is usually not advertised, but almost every latency or consistency metric reported on a spec sheet is measured at QD1 and usually for 4kB transfers. When the drive only has one command to work on at a time, there's nothing to get in the way of it offering its best-case access latency. Performance at such light loads is absolutely not what most of these drives are made for, but they have to make it through the easy tests before we move on to the more realistic challenges.

The 983 ZET comes even closer to matching the Optane SSD on our random read power efficiency score. Even in this enterprise configuration, the Samsung Phoenix is still a relatively low-power NVMe SSD controller, and the 983 ZET only draws a bit more power overall than the TLC-based 983 DCT. While the Optane SSD may have delivered almost twice the raw performance, it only has a 15-20% advantage in performance-per-Watt here.

The random read latency stats for the 983 ZET clearly set it apart from the rest of the flash-based SSDs and put it in the same league as the Optane SSD. The Optane SSD's average latency of just under 9µs is still better than the 16µs from the 983 ZET, but the tail latencies for the two are quite similar. Both Z-NAND and 3D XPoint provide better 99.99th percentile latency here than the average latencies of the MLC and TLC drives. 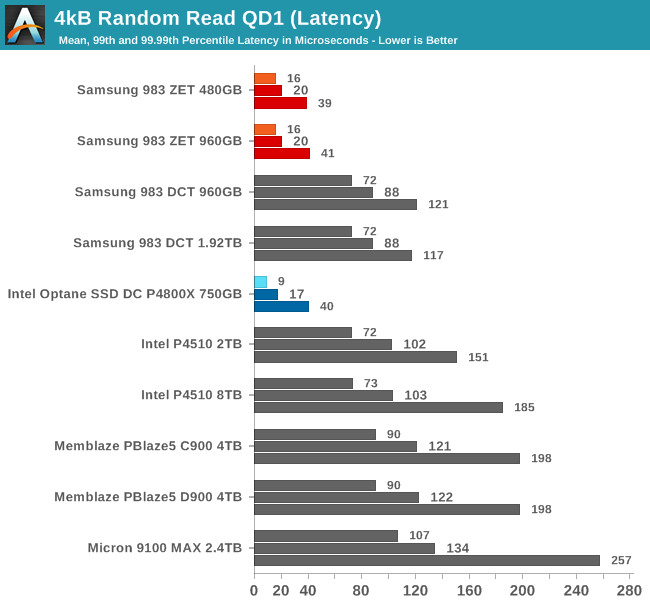 The random read performance of the 983 ZET is clearly optimized specifically for 4kB reads—both smaller and larger transfers take a significant hit to IOPS. By contrast, the Optane SSD's IOPS declines smoothly as the transfer size increases from the minimum of a single 512 byte logical block.

The other flash-based SSDs show fairly low throughput until the transfer sizes get up to around 128kB, but the Z-NAND's smaller page size allows it to exercise parallelism even for smaller transfers: the 960GB 983 ZET has higher throughput for 32kB reads than the TLC-based 983 DCT for 128kB reads.

The Samsung 983 ZET takes the lead for QD1 random write performance, and the Intel Optane SSD doesn't stand out from other flash-based SSDs. Intel's 3D XPoint memory has a far faster write latency than the programming times of NAND flash memory (even Z-NAND), but flash-based SSDs are very good at covering this up with DRAM caches. Thanks to their power loss protection capacitors, enterprise SSDs can safely report writes as complete while the data is still in their RAM, and the writes can be deferred and batched in the background. Intel's Optane SSDs do not have any DRAM and instead performs writes directly without the caching layer (and without the large power loss protection capacitors).

The Samsung 983 ZET also provides the best power efficiency during our QD1 random write test, but the Optane SSD and the TLC-based 983 DCT come close. In terms of total power, the Optane SSD draws about the same performing random writes as random reads, but all of the flash-based SSDs require much more power for writes than reads. The Samsung 983 ZET requires significantly more power than the 983 DCT, but not quite as much as the Intel P4510 and the other flash-based SSDs that use larger controllers. 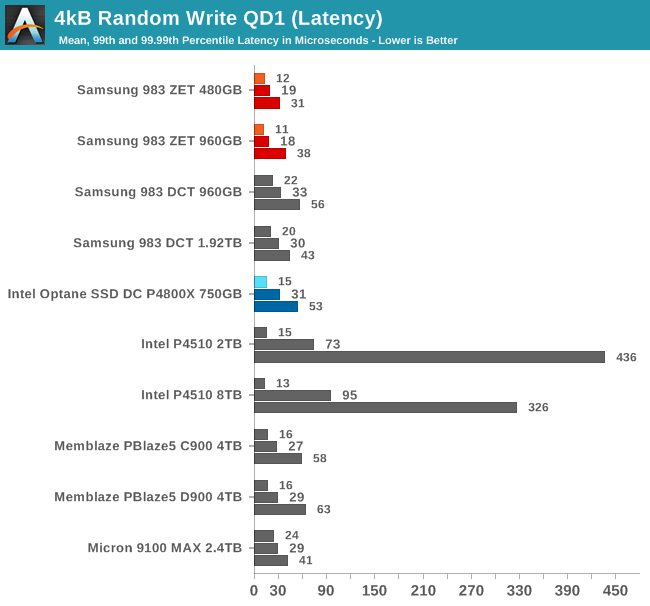 The latency stats for the Samsung 983 ZET performing random writes at QD1 are the best in the bunch, but it doesn't stand out by much. The Intel P4510 has high tail latencies, but the rest of these NVMe drives have 99.99th percentile latencies that are no worse than four times their average latency. At low queue depths, almost all of these drives have no problem with QoS.

The Samsung 983 ZET's optimization for 4kB accesses is again apparent, but the performance for smaller writes is not crippled as it is for the Memblaze PBlaze5 and Micron 9100 MAX. Using transfers larger than 4kB doesn't yield any steady-state random write throughput increases all the way up to writing 1MB blocks, so IOPS falls off quickly as transfer size grows.

The queue depth 1 sequential read performance of the 983 ZET is lower than the TLC-based 983 DCT: about 2GB/s instead of 2.5GB/s. This puts the 983 ZET more in line with Intel's drives, including the Optane SSD. This is one area where the smaller page size of the Z-NAND is detrimental.

The 983 ZET draws only slightly less power than the 983 DCT, which combined with its 20% worse performance leads to a lower efficiency score. However, both Samsung drives still provide better performance per Watt than the other drives included here, which all have more power-hungry controllers than the Samsung Phoenix.

The 983 ZET's sequential read speed at QD1 is almost at full speed for block sizes of at least 32kB, but there's a slight improvement at 512kB or larger. The 983 DCT and Intel P4510 top out with 256kB transfers, while the Memblaze PBlaze5 delivers poor read speeds without either a large block size or high queue depth.

The Samsung 983 ZET excelled at QD1 random writes, but it is hardly any better than the TLC drives for QD1 sequential writes, and the smaller Z-SSD is substantially slower. This is because even at QD1, there's enough data moving to keep the drive at steady state, where the background garbage collection is limited by the slow block erase operations that affect Z-NAND just as much as traditional NAND flash memory. The Optane SSD is almost three times the speed of the larger Z-SSD. It is followed by the PBlaze5 C900, which benefits from a PCIe 3 x8 interface.

Both capacities of the 983 ZET use slightly more power during the sequential write test than the 983 DCT, which leaves the smaller Z-SSD with a significantly worse efficiency score. The larger Z-SSD and the two TLC-based 983 DCTs have the best efficiency scores among the flash-based SSDs, but that's still only two thirds the performance per Watt provided by the Optane SSD.

For sequential writes, the 983 ZET does not penalize sub-4kB transfers in terms of IOPS, but such small writes cannot deliver much throughput. The 983 ZET is close to full steady-state throughput with 8kB transfers, but doesn't actually peak until the transfers are up to 64kB.