Anyone looking at a high-end Intel system has three choices: Core i9, Xeon W, or the larger socket Xeon Scalable. Those first two both use the LGA2066 socket, and have identical core/frequency configurations, but are in effect different platforms with locked motherboards for each. The benefits of the Xeon W and Xeon Scalable lie in the ability for ECC memory, vPro management features, and with some processors there are different cache variants.

In a previous generation, Intel had workstation counterparts in line with its high-end desktop line. Both of the products used the same socket, which made it easier for consumers, and the same single socket motherboard that held a Core i7 could also run a range of Xeons: the big E7 series, the dual-socket focused E5-2600 series, and the workstation-focused E5-1600 series. The benefits of these workstation chips were primarily for ECC memory, management features, and OEM support.

Cycle forward to today, and due to socket bifurcation, none of the server focused processors will fit into a modern HEDT platform. To that extent Intel created the Xeon W family, borne from the E5-1600 line, which matches up with the consumer line but with the usual ECC/OEM add-ons. Intel also cut consumer chipset support, pushing Xeon W out of consumer hands and purely into the OEM/system market due to the lack of server chipset based motherboards at retail. Despite the doom and gloom, Supermicro recently sampled us their server chipset X11SRA and a handful of Xeon W processors for review.

Announced back in January 2018, the Xeon W launch was somewhat unexpected: we had reason to believe that Intel would introduce components for the consumer high-end desktop socket with ECC, however what form that would take was unknown, especially with processors up to 18 cores being released on the consumer side. Intel would ultimately have to draw parity with the Xeon W line, potentially causing a shift in its single socket market on the server side as well. 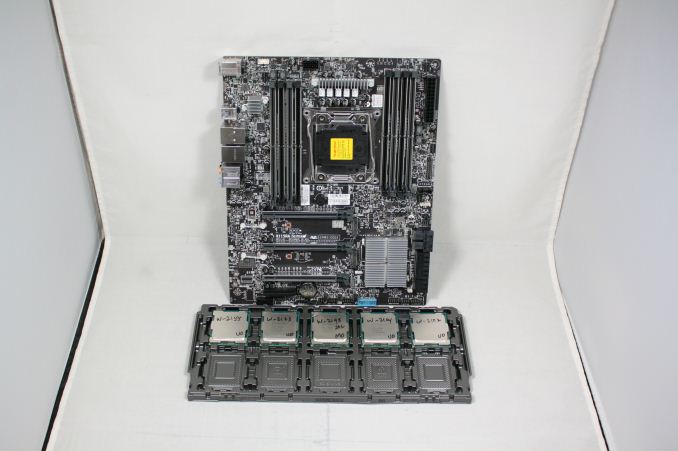 In the end, Intel released eight new Xeon W processors for the market, along with two off-roadmap processors for particular OEMs, and a single version for Apple. The configurations are essentially identical to the consumer HEDT line, using the Enterprise-focused Skylake-SP cores with new AVX512 instructions, a new mesh interconnect, and a rearranged cache structure focusing on L2 data. We have covered the changes compared to the standard Skylake-S core in detail in our initial Skylake-X and Skylake-SP reviews.

What Intel has done with the Xeon W processors compared to the consumer HEDT line is focus more on the lower core count models: in the full line-up there are four quad-core models, some with hyperthreading, but there are also two six-core parts, a single eight-core part, and a ten-core parts. One could interpret this SKU differentiation as Intel not focusing as much on the high-end with the Xeon W line – where the consumer line as products at 18/16/14/12/10 cores, the Xeon W only has 18/14/10/10/8 as the top five models.

One of the other changes is in the AVX512 compatibility. With the Xeon Scalable processors, each core has the equivalent of two AVX512 FMA ports on each core to maximize bandwidth, except the off-roadmap SKUs that have one. The consumer product line also has two, although Intel initially said certain parts only had one. These Xeon W parts will also have two AVX512 FMA ports each, allowing hand-tuned code to use AVX512 to its fullest. Xeon W also has ECC memory, which is usually one of the main reasons to buy the processors.

Each of the CPUs can support up to 512GB of DDR4-2400 ECC RDIMMs in a quad channel configuration, which means that each module can be 64GB apiece. This is up from the 128 GB UDIMM support on the consumer space, but lower than the 768GB RDIMM support for Xeon Scalable (caused by having six memory channels). 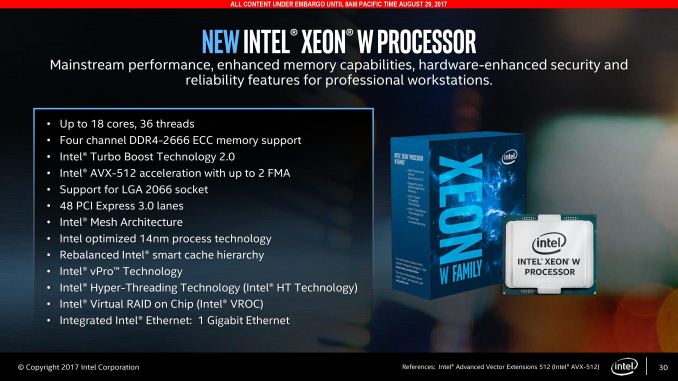 A small note about the ‘different’ processors in the stack. The W-2102 and W-2104 are the low-end quad-core processors without hyperthreading or Turbo, but these are classified as ‘off roadmap’. These processors are not for sale to all OEMs, like the others, and typically are built for specific OEMs that have contracts with specific customers in mind. As a result, pricing lists will not show these parts, and to be honest, Intel does not really like talking about them as promoting them has no inherent value. Of course from our perspective, we like examining every member of the stack, regardless of how widely available it is.

The other set of different processors are the Apple-only parts. These are only found in the Late 2017 model of the updated iMac Pro. Take for example the Xeon W-2150B - this 10-core processor is almost identical to the 10-core Xeon W-2155, but has a lower base frequency of 3.0 GHz (compared to 3.5 GHz). The lower base frequency will greatly reduce the TDP of the processor, however these processors rarely run at base frequency and almost always in a turbo state, where TDP is undefined, making it difficult to place this processor. It is most likely a part that is binned well for voltage, frequency, and power. Again, this is another part that isn’t available to everyone (but if someone has one, we’d love to test it). 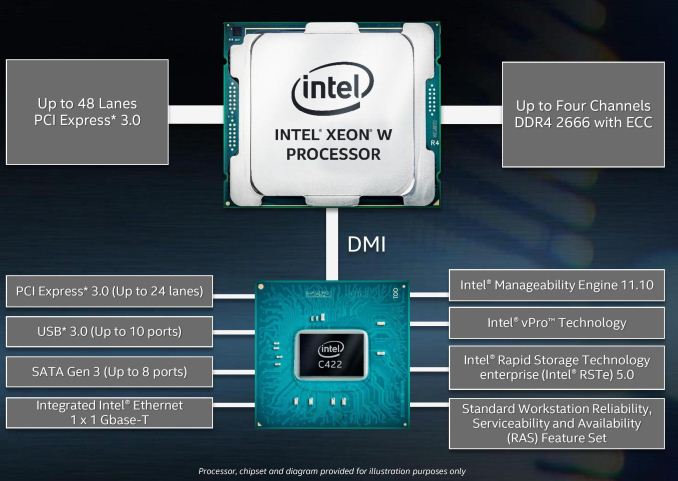 All these processors will require a motherboard that uses the C422 chipset. These chipsets are almost identical to the X299 chipsets used in the consumer platform, but are firmware locked to Xeon W processors only with support for ECC. Because of the split between the consumer and workstation platforms, there are very few C422motherboards in the open market for custom builders – most OEMs (Dell, Supermicro) build their own internal motherboards for pre-built systems specifically for their own customers, and optimized for their intended outcome (performance, price, etc.).

Intel's per-core turbo data for these workstation parts are split up into three sections, due to the instruction sets they have. On the 'hardest' instructions, Intel uses special turbo values for AVX-512, as due to the way these instructions are processed, more heat is generated on chip. The chip has to balance frequency and power draw, so the AVX-512 data comes in at a lower frequency in order to keep the turbo in check.

Behind AVX-512 is AVX2, which is still somewhat of a strain on the processor beyond regular instructions, but not as much. Where AVX-512 requires dedicated die area for support of the vector units, AVX2 is built into the back-end of the standard core design.

For the regular instructions, turbo goes a bit like this:

For a number of users, the key metrics here are the all-core turbos, with the 18-core part having an all-core turbo of 3.2 GHz. Interestingly the W-2155 and W-2145 sits well here: for any code that can't reliably go beyond 12-14 threads, having the higher frequency but lower core count part might actually perform better. We saw a bit of this in our review, with the variable threaded loads executing somewhat better on the W-2155 than the W-2195.

Then and Now: Defining a Workstation

By splitting the motherboard support for workstation grade processors, Intel has (whether on purpose or not) redefined what it means to have an Intel workstation. In previous generations, a certain market of users would happily invest into an E5-2640 style processor and place it into a single socket consumer motherboard, taking advantage of a potentially better-binned processor, and on some motherboards that qualified it, ECC memory. Depending on the location and time, in some instances this method was cheaper than going for the similar grade consumer processor. Due to the motherboard support, these systems were certainly more widespread compared to today. In fact, some users are currently looking to eBay and investing in older 8-core and 10-core processors because they are extremely affordable. 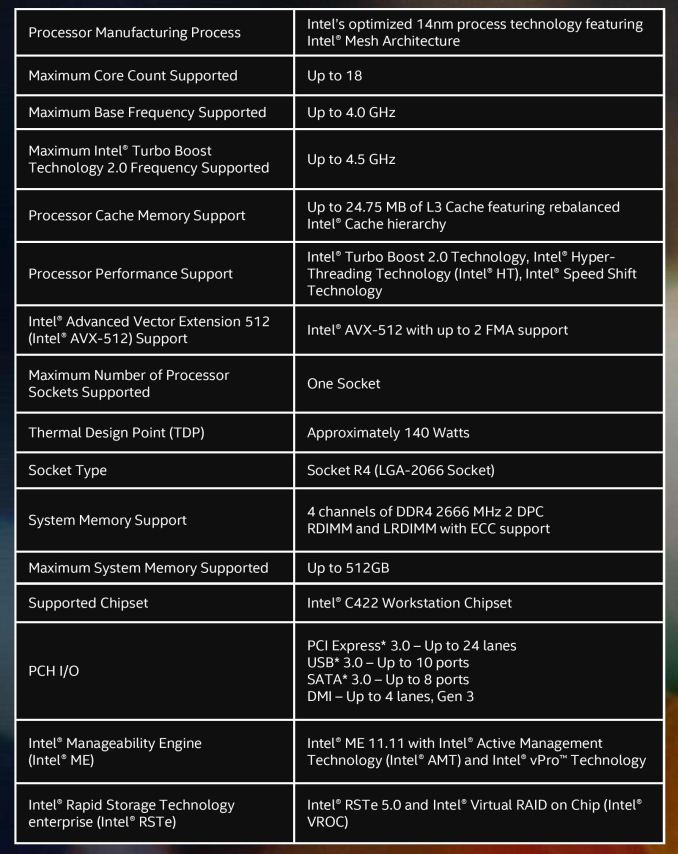 In 2018, for the Intel workstation enthusiast, the situation is complicated and confusing.

If a workstation user looked at consumer-grade hardware, they can get the cores and the motherboard, but lose the ECC memory and co-processor compatibility consummate with a professional system: some motherboard hardware may not be qualified with Quadro, Tesla, FirePro, Xilinx, Altera, etc., because those motherboards aren’t built for that market.

If a workstation user looked at professional-grade hardware, it becomes a case of struggling to self-build based on availability or paying through the nose for an OEM system that might have some horrendous markup. We spoke to one OEM in years past, who said that the prices on the website were almost fictitious – most of their sales in this area come from large-scale corporate contracts which offer discounts based on volume. The single home-brew workstation user was not their target market, unless they wanted to pay the high prices.

Ultimately if a user is going above and beyond for an OEM system, it might be worth looking into Xeon Scalable processors, especially if multiple sockets in a single system are required. This increases the expense significantly, however. The benefits on building a consumer-based workstation, if memory is not needed, also come down to clock speed and AVX-512 support.

The alternative is to look at AMD’s workstation offering, Threadripper, which is cheaper, offers similar core counts, more ECC memory per processor (depending on motherboard support), and more PCIe lanes, but does not have AVX-512 and can suffer from a non-unified memory architecture for software that requires a lot of core-to-core and core-to-memory communication. The multi-socket option here is EPYC, which gets more cores and more system memory, but not increase in PCIe lanes due to the way the platform shares resources.

A lot of purchasing decisions will be skewed specifically for the workflow in mind, which is one of the reasons why we have so many benchmarks in play for our reviews – there is no ‘one benchmark fits all’ scenario, and we are now in a situation where there are multiple options to choose from depending on the size of the wallet. 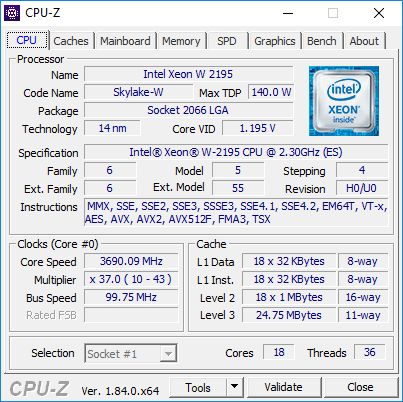 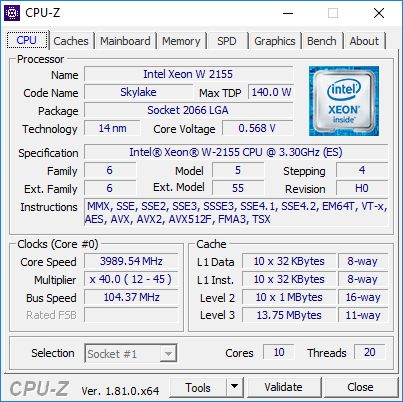 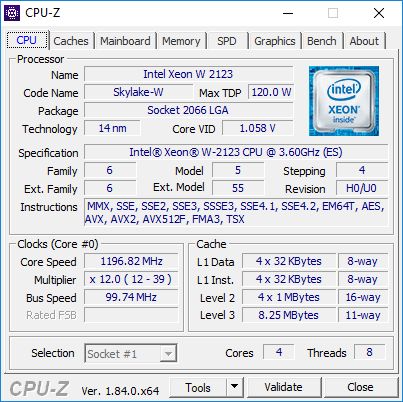 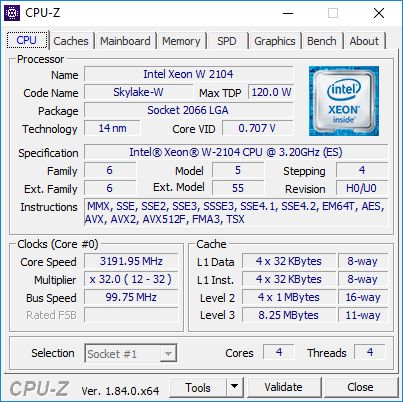 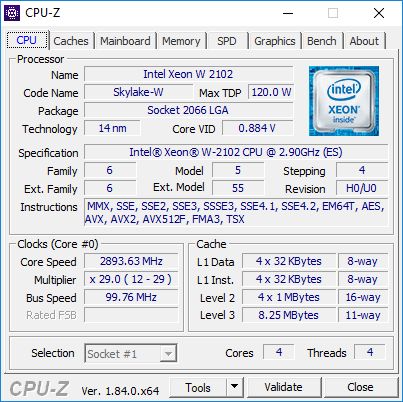 We have put these processors through our current generation testing suite, with the Spectre and Meltdown patches applied. The main targets for comparison are Intel’s Skylake-X high-end desktop platform, Intel’s Skylake-S consumer platform, and AMD’s Ryzen and Threadripper platforms.

The motherboard used in our review is the Supermicro X11SRA, one of the more 'available' Xeon W motherboards on the market. 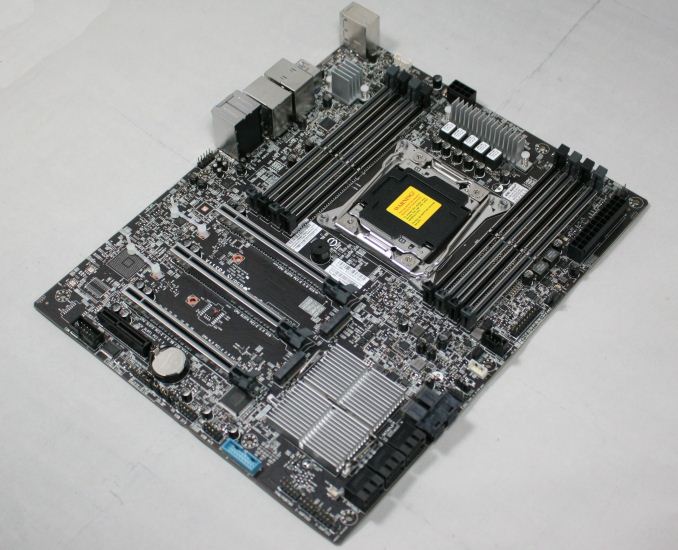 You can read our review of the motherboard here.

We must also say thank you to Kingston for sampling us some DDR4-2666 C19 RDIMM Memory for this review. 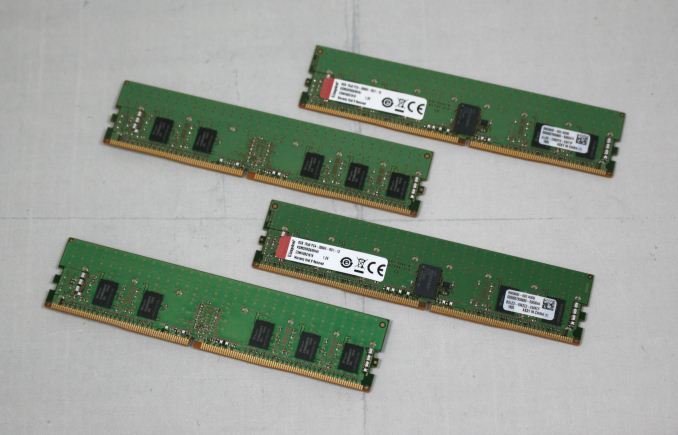 Xeon W processors support RDIMM ECC memory, and our motherboard here would not accept UDIMMs, and Kingston kindly supplied the memory needed. The (KSM26RS8/8HAI) modules were faultless in our testing.