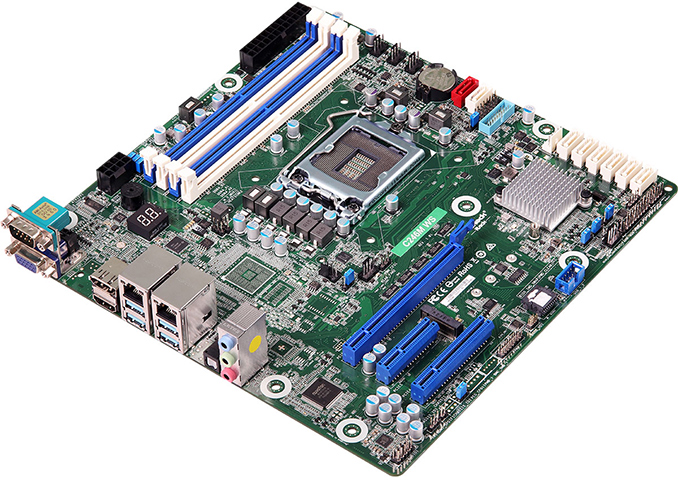 ASRock Rack has announced one of the industry’s first Micro-ATX motherboards for Intel’s new Xeon E processors for entry-level servers and workstations. The C246M WS platform is aimed at compact workstations, it supports a variety of PCIe add-in-cards, rather rich storage capabilities, and a couple of GbE connectors.

As the name suggests, the ASRock C246M WS motherboard is based on Intel’s C246 chipset and therefore supports Intel’s Xeon E-2100 series processors. The platform features a multi-phase VRM that uses solid-state inductors and capacitors to sustain stable operation during prolonged workloads. The design of the motherboard contains an empty pad for the Aspeed AST2500 IPMI chip, so eventually ASRock plans to launch a management version of the product as well. That server SKU will support IPMI 2.0 and will gain an additional Realtek RTL8211E Ethernet controller, the company’s website suggests. Probably for cost reduction reasons, the manufacturer decided not to install a TPM module onto its C246M WS workstation platform, but there is a TPM header, so the actual PC makers can still add this feature if their clients want it. 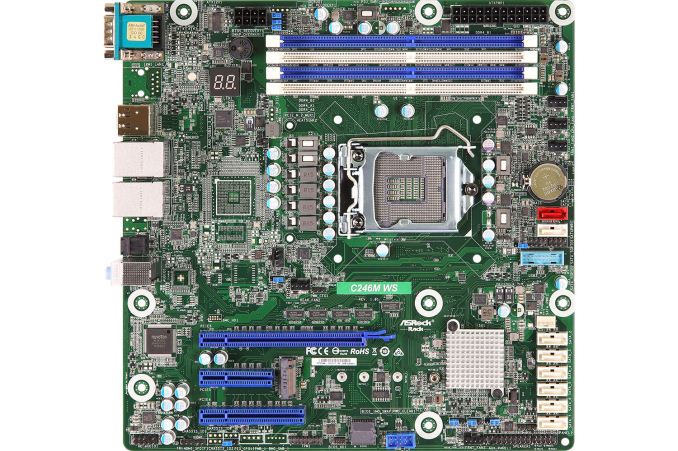 Just like other motherboards with the LGA1151 v2 socket, the C246M WS comes with four DDR4 DIMM slots supporting up to 64 GB of DDR4-2667 memory with ECC technology when a Xeon E processor is installed. PCIe 3.0 slots include one x16, one x8, and one x4 slot. The first one automatically switches to x8 mode once the second one is occupied.

When it comes to storage, the C246M WS has one M.2 PCIe 3.0 x4 slot (supports both NVMe and SATA drives), and eight SATA connectors (one connector shares SATA with the M.2 slot, hence no more than eight SATA drives per system no matter the form-factor). If all storage options are used, the C246M WS can support up to 12 drives in a Micro ATX system: four PCIe/NVMe SSDs (one M.2 + three PCIe 3.0 slots) as well as eight SATA HDDs/SSDs.

Moving on to connectivity offered by ASRock’s C246M WS. The motherboard has two GbE ports, four USB 3.1 Gen 2 Type-A connectors (there are internal headers too), a D-Sub output (will be needed mostly on a server version outfitted with the AST2500 IPMI chip), an HDMI output, a Serial port, and audio outputs (analog and digital).

ASRock Rack generally sells products to businesses, so expect the C246M WS to show up inside entry-level compact workstations in the coming months. It is unclear when (if at all) the C246M WS emerges in retail and at what price point.