When Intel demonstrated its 28-core system running at 5 GHz at the Computex 2018 keynote this week, there were many questions surrounding the hardware and what was required in order to showcase this. The presentation was relatively light on details – perhaps purposefully so – however Intel SVP and GM Gregory Bryant stated that the processor was set to come out during Q4.

You can read our coverage about the launch in this article:

We also had a chance to examine the system that the demo was run on, in particular the cooling method and the motherboard. We have this article here:

We Got A Sneak Peek on Intel's 28-Core: All You Need to Know: Link

Now there were obviously a lot of questions about the demonstration. Was the CPU overclocked? What cooling was used? What platform did it run on? Which motherboard did it run on? What architecture is being used? What process node? What was the power consumption? We met with an Intel representative yesterday who answered some of these questions.

Was the CPU Overclocked?

The Intel representative did confirm the CPU was overclocked. We were told that on stage the presenter was actually meant to clarify that the system was overclocked, however the specific wording was not stated as it had been prepared.

There are many ways to interpret this – we did tell Intel that we had hoped that the presenter would have spent more time on stage talking about the system in play, discussing the platform it was running on, and making the system more ‘bright’ inside so that people could determine several things from photographs, rather than it looking almost like a black box with hidden pipes. Our commentary was taken on board by the Intel team we spoke to.

What cooling was used?

Intel confirmed that a water chiller was used, which we saw in our system demo examination the day after the presentation. We were told that it was not intended to showcase the cooling on the stage due to time constraints, to which we responded that Intel’s implementation of pre-overclocked systems in the past are typically accompainied a discussion on the pre-overclocked nature and the cooling used in the past, yet this presentation did not have this. 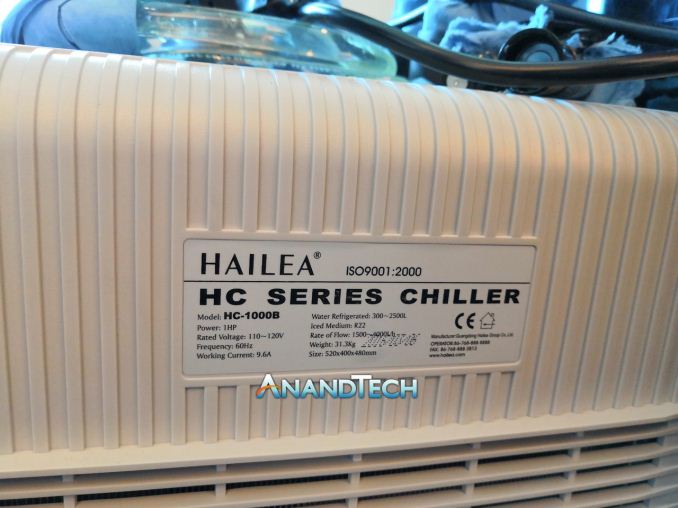 What Platform Did It Run On?

Intel did not answer this platform directly, however it was clear that the CPU was aimed at the LGA3647 server-based socket given from our examination of the demo system. It was unclear how Intel was going to promote this as an extreme workstation-type system, however Intel did note that they expect only a select market to be interested in this type of processor: a niche of a niche. 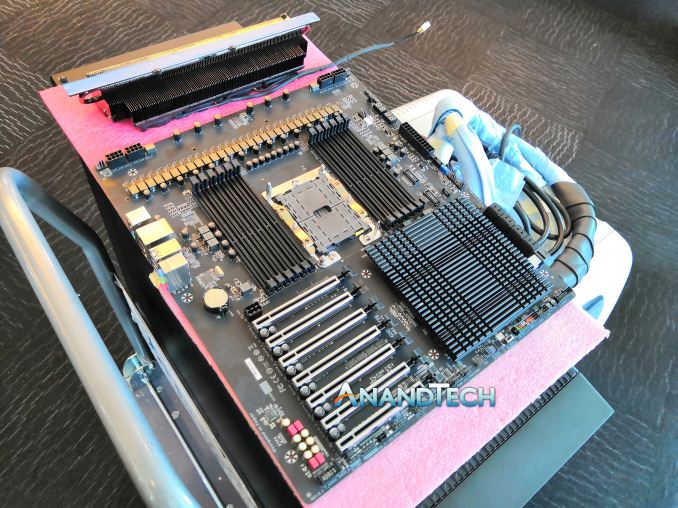 Intel know very well that there is a crowd of its customers that will buy performance at any price, and it doesn’t take a leap to suggest that this part is for those users.

Which Motherboard Did It Run On?

At the time of the presentation, Intel stated that they had partnered with both ASUS and GIGABYTE to create systems around the new 28-core product, however they didn’t state which system the 5 GHz demo was run on. We heard from both of the motherboard companies that it was actually the GIGABYTE system that hit 5 GHz, however it was noted that Intel did not explicitly call out the partner that hit the milestone. GIGABYTE confirmed that they certainly hit 5 GHz; we have yet to speak to ASUS on the matter. We do know that Intel quickly removed the CPUs in the demo systems from ASUS and GIGABYTE the next day with little notice. In between those times we have seen videos published from LinusTechTips (on ASUS) and Paul’s Hardware (on GIGABYTE) showing a Cinebench run.

What Architecture Did It Run? What Process Node?

The only item that Intel would confirm here is that the 28-core processor is built on one of its 14nm nodes. For anyone thinking it was a 10nm node, this confirms that it was not, however it does not say much more; Intel is purposefully keeping its cards close to its chest on this one. The smart money seems to be that the chip is likely to at least be based on the Skylake-X processors, like the 28-core Xeon Platinum 8176 or Xeon Platinum 8180, rather than the future Cascade Lake platform, however Intel has also promised that the consumer version of Cascade Lake-X will be coming by the end of the year. 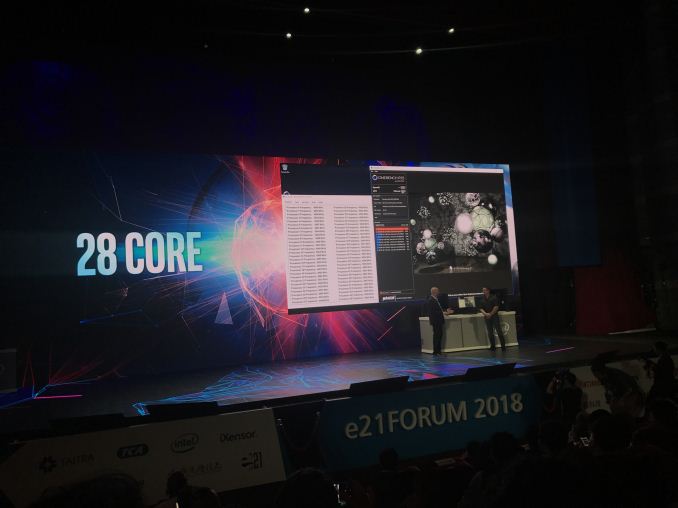 Speaking with the motherboard vendors and OEMs in general about Intel’s HEDT plans is a tricky business, but most seem to be focused on their current X299 motherboards right now rather than a series of X299 refreshes that normally accompany an HEDT update.

What was the Power Consumption?

Again, this was one of the items that Intel wants to keep close to its chest. After confirming that the 5.0 GHz number was an overclocked value, it does mean that the base TDP for a ‘retail’ processor will be much lower, as the chip will be running at much lower clocks. The Xeon Platinum 8180 has a base frequency of 2.5 GHz and a turbo of 3.8 GHz for a TDP of 205W (TDP being defined at the base frequency only), and we know that the LGA3647 socket by its Intel reference design was made for chips up to 265W, so the frequency of the 28-core part shown by Intel for extreme workstations is only likely to be a +100-400 MHz more at most.

Interestingly enough, Intel states the maximum operating temperature of the 8180 at 205W TDP as 84C case temperature and 98C DTS, which sounds slightly higher than its standard settings for enterprise chips. It would mean that this new 28-core, if it comes out at 265W TDP, is likely to be a super high bin of the part. Of course, this will come with a higher cost.

One of the interesting numbers to come out of the initial announcement were that overclockers were seeing 1000W power draw for an 18-core Core i9-7980XE at 4.9 GHz, so one would assume that a 28-core at 5.0 GHz would be more. We know that the demo that achieved 5.0 GHz was using a Hailea water chiller capable of 1770W of cooling, and the system being used had a 1600W power supply with a low power graphics card. That gives us a good idea for low-bound and high-bound. However Intel would not help narrow down our estimates.

What Intel Needs To Do

One of our points to Intel was that the story around the 28-core announcement was not ideally communicated. (ed: this is an understatement) The systems holding the machines were not very well described in what they were doing, leading to massive amounts of speculation. The insides of the systems were dimly lit, and the cooling apparatus was hidden. Intel could have made the story around the parts be about the technology behind the demonstration, and the ability to push the limits of the hardware to new heights, however, even if the word ‘overclocked’ was accidentally not said on stage, these part of the story was not explained. Not in the ‘it wasn’t explained well’, it just wasn’t explained period. The best thing Intel can do at this point is to grab the story by the horns, and show that this is a passion project: let the readers and reviewers know about the platform, about the implementation (even if new explicit information isn’t shared), and that it actually takes a good amount of engineering prowess and skill to put on a 28-core, 5.0 GHz demonstration.

As it stands, we await further information.