The industry has come a long way in the last couple of years, and Acer has stepped up their game with the Swift 3’s design. It features an all-aluminum exterior with a brushed finish, and compared to any plastic model, it offers significantly better looks, along with that cool-to-the-touch metal feel that always adds a bit of luxury.

Opening the lid shows off the 15.6-inch display, which isn’t a thin-bezel design, but that’s not really expected in this category. The larger display as a percentage of the total size helps mask the bezels too. 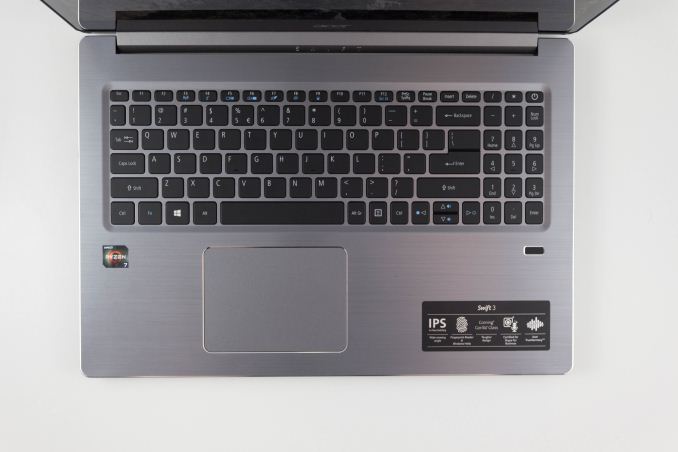 Taking a look at the keyboard, we see the first issue with the Swift 3 on the 15.6-inch models, which feature a number pad squeezed in on the right. The 14-inch models don’t offer the number pad, and frankly, the 15-inch version shouldn’t either. It’s just too cramped. There’s likely some market that wants the number pad on a 15.6-inch notebook, but it just tends to not offer a great experience since there’s not really enough room to offer the correct size one. This one is missing the addition and enter keys that should be on the right, which really takes away from the reason to even have one to start with. You’ll also notice that the power key is part of the keyboard, which is something that can tend to be an issue, but since it’s above the number pad rather than replacing the delete key as it is on some notebooks, it’s not as big of an issue.

Finally, the keyboard itself is not the greatest. There’s not a lot of travel on the keys, and the keys themselves are somewhat slippery, so trying to touch-type on this notebook is a bit of a challenge. With a larger, thicker notebook in the 15.6-inch model, it would be nice to see a better keyboard than this. Of the entire system, the keyboard is one of the most disappointing features.

The keyboard does offer backlighting though, which is always welcome, but the keyboard backlighting isn’t tied to the trackpad use like on most systems, so when using it in a dark room, the lighting turns off when you are moving the pointer, and then it’s hard to find where the keys are again.

Luckily the same isn’t the case for the trackpad. Acer’s generously sized trackpad features Microsoft Precision drivers, and has a nice smooth finish. It’s large, but not distractingly so, and works very well. Trackpads can still be a hit or miss item, somehow, but this one is a hit.

Looking at the sides we can see all of the I/O, and there’s plenty here for almost anyone. With a 0.75-inch thick notebook, you may have expected to see an Ethernet port as well, but it’s not there, and on a model such as this it makes sense to omit it. If this was a business focused machine, it would be important, but most consumers are going to want to keep this untethered you’d have to think. If they do need Ethernet, there’s plenty of USB ports to hook it to.

The Acer Swift 3 is a well-designed notebook, with plenty of inputs, a smart looking aluminum finish, and creature comforts like a fingerprint reader to make your life easier. It’s only let down by the less than stellar keyboard, and that’s a shame.