One of the highlights of the Ryzen 2000-series launch is that these processors use GlobalFoundries’ 12LP manufacturing process, compared to the 14LPP process used for the first generation of Ryzen processors. Both AMD and GlobalFoundries have discussed the differences in the processes, however it is worth understanding that each company has different goals: AMD only needs to promote what helps its products, whereas GlobalFoundries is a semiconductor foundry with many clients and might promote ideal-scenario numbers. Earlier this year we were invited to GlobalFoundries Fab 8 in upstate New York to visit the clean room, and had a chance to interview Dr. Gary Patton, the CTO. 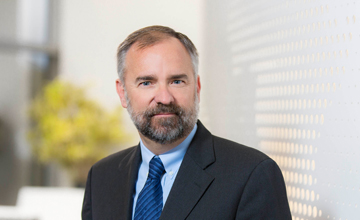 The Future of Silicon: An Exclusive Interview with Dr. Gary Patton, CTO of GlobalFoundries

In that interview, several interesting items came to light. First, that the CTO doesn’t necessarily have to care much about what certain processes are called: their customers know the performance of a given process regardless of the advertised ‘nm’ number based on the development tools given to them. Second, that 12LP is a series of minor tweaks to 14LPP, relating to performance bumps and improvements that come from a partial optical shrink and a slight change in manufacturing rules in the middle-line and back-end of the manufacturing process. In the past this might not have been so news worthy, however GF’s customers want to take advantage of the improved process.

Overall, GlobalFoundries has stated that its 12LP process offers a 10% performance improvement and a 15% circuit density improvement over 14LPP.

This has been interpreted in many ways, such as an extra 10% frequency at the same power, or lower power for the same frequency, and an opportunity to build smaller chips.

As part of today’s launch, AMD has clarified what the move to 12LP has meant for the Ryzen 2000-series: 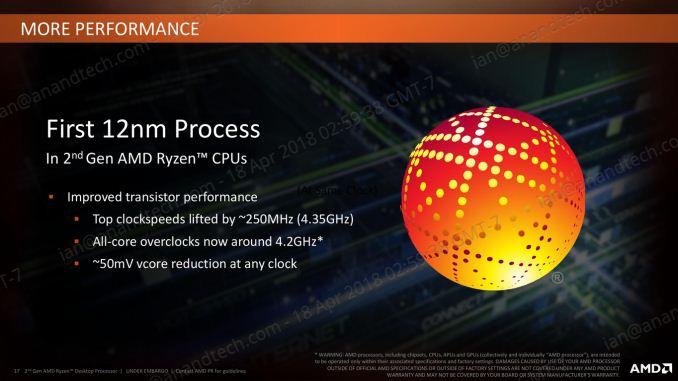 AMD goes on to explain that at the same frequency, its new Ryzen 2000-series processors draw around 11% less power than the Ryzen 1000-series. The claims also state that this translates to +16% performance at the same power. These claims are a little muddled, as AMD has other new technologies in the 2000-series which will affect performance as well.

One interesting element is that although GF claims that there is a 15% density improvement, AMD is stating that these processors have the same die size and transistor count as the previous generation. Ultimately this seems in opposition to common sense – surely AMD would want to use smaller dies to get more chips per wafer?

Ultimately, the new processors are almost carbon copies of the old ones, both in terms of design and microarchitecture. AMD is calling the design of the cores as ‘Zen+’ to differentiate them to the previous generation ‘Zen’ design, and it mostly comes down to how the microarchitecture features are laid out on the silicon. When discussing with AMD, the best way to explain it is that some of the design of the key features has not moved – they just take up less area, leaving more dark silicon between other features.

Here is a very crude representation of features attached to a data path. On the left is the 14LPP design, and each of the six features has a specific size and connects to the bus. Between each of the features is the dark silicon – unused silicon that is either seen as useless, or can be used as a thermal buffer between high-energy parts. On the right is the representation of the 12LP design – each of the features have been reduced in size, putting more dark silicon between themselves (the white boxes show the original size of the feature). In this context, the number of transistors is the same, and the die size is the same. But if anything in the design was thermally limited by the close proximity of two features, there is now more distance between them such that they should interfere with each other less.

For reference, AMD lists the die-size of these new parts as 213mm2, containing 4.8 billion transistors, identical to the first generation silicon design. AMD confirmed that they are using 9T transistor libraries, also the same as the previous generation, although GlobalFoundries offers a 7.5T design as well.

So is Zen+ a New Microarchitecture, or Process Node Change?

Ultimately, nothing about most of the Zen+ physical design layout is new. Aside from the manufacturing process node change and likely minor adjustments, the rest of the adjustments are in firmware and support: