Today Intel announced their quarterly earnings, and 2017 was another record year for the company. Q4 revenue was a record $17.1 billion, and the full year revenue was a record $62.8 billion. For this quarter, Intel’s GAAP earnings took a hit due to a $5.4 billion tax expense thanks to the new tax reforms that were enacted in December, but as a one-time hit, it shouldn’t be a concern going forward. In fact, Intel is forecasting only a 14% tax rate for FY 2018. 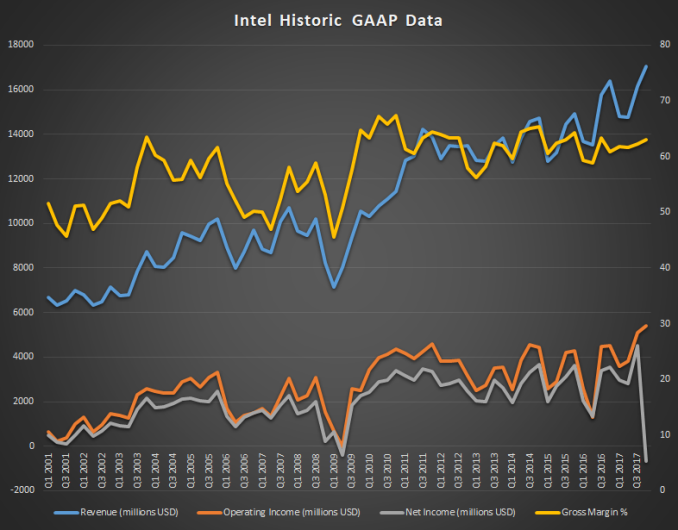 Intel is still pivoting business away from the declining PC market, and they have done well to diversify, but still, their PC business is still the biggest piece of the pie. For the quarter, the Client Computing Group had revenues of $9.0 billion, which is down 2% year-over-year, but for the full year of 2017, their CCG was up 3% to $34 billion. It’s not quite dead yet. In an effort to show their diversification, Intel is now quoting their data in “PC-centric” and “Data-centric” and conveniently, Data-centric is all of their business outside of the CCG, but even so, the CCG still accounted for 53% of Intel’s revenue for the quarter.

But, the Data-centric group is certainly growing much quicker than the PC market which is still in a decline. The Data Center Group is by far the largest portion of Intel’s Data-centric efforts, and the DCG had revenues of $5.6 billion for the quarter, which are up 20% year-over-year. With the expansion of the cloud, this likely still has some ways to go before it hits a peak, so it’s likely just a matter of time before they finally surpass their Client Computing Group.

Intel still hasn’t shipped anything on 10nm to the point where someone could go buy a chip, although we’re finally getting close, with Intel shipping 10nm to some of their partners. 14nm was delayed, but the delay in getting to 10nm has been longer than likely anyone expected. Intel has still made some bold claims about density, so it should be a good node for them if and when it arrives.